As of May 2020, MassLandlords now compiles eviction data monthly. The Massachusetts eviction process is called “summary process.” It is not legal for a landlord to evict a renter without filing for “summary process.” These filings are a public record and can be inspected in detail or in aggregate by anyone. The eviction data we are now compiling add detail to the Massachusetts Trial Court statistics released each fiscal year. For instance, the trial courts show total summary process filings each year. MassLandlords now compiles total filings by division by month. 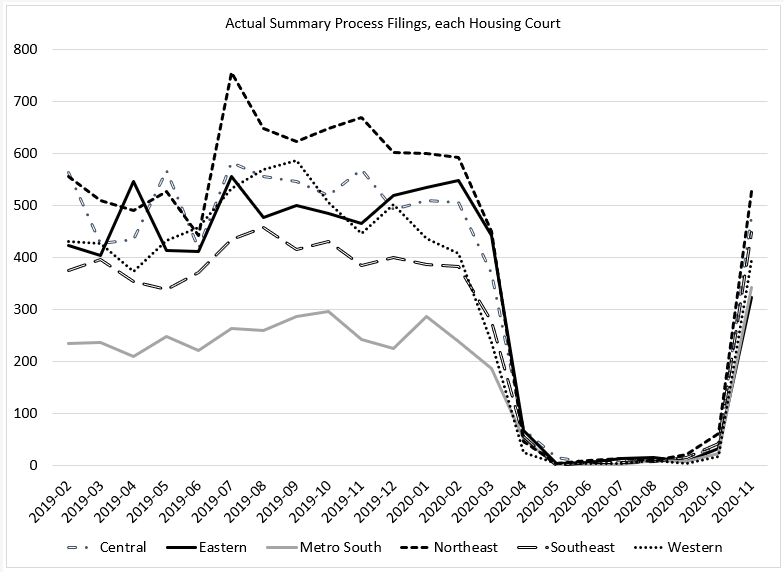 Filings are not Forced Move-outs

Note that summary process is the legal term for the court procedure where a landlord requests enforcement of a rental agreement. The overwhelming majority of summary process actions end without an eviction, or a forced move-out. For instance, many landlords and renters mediate in court and agree to a payment plan. Other mediated agreements might include a voluntary (non-forced) move-out at a mutually agreeable date in the future, sometimes months or a year after. Note also that a host of individuals intervene with the purpose of preventing forced move-outs. Help comes from Residential Assistance for Families in Transition (RAFT), the Tenancy Preservation Program (TPP), and even judges themselves when they enforce the law on sanitary code conditions, security deposits, and much more.

The confusion between forced move-outs and summary process actions has been worsened by misreporting. As an example of such misreporting, we detailed the Boston Globe’s carelessness in “Global (Over)Reach: Boston Globe Stokes Eviction Fear with Falsehoods,” April 19, 2019.

Summary process filings result in a forced move-out only about 10% of the time.

What Kinds of Questions Can These Massachusetts Eviction Data Reports Answer?

What Kinds of Questions Can These Massachusetts Eviction Data Reports Not Answer?

Per Massachusetts case law, any landlord using a corporate entity (LLC, Trust, etc.) must hire an attorney. Our data indicate that when given the choice, more than half of landlords are small enough that they do not want to hire an attorney.

The difference between landlords and renters is not as great as between, say, credit card companies and debtors. Big banks and financial institutions all get lawyers, but people with credit card debt do not. If the taxpayers are to fund a civil right to counsel, we propose this might be better started with debt collection than housing. Landlords are mostly ordinary people and we don’t want to have the expense of hiring an attorney. The playing field in housing court can be leveled much more thoroughly for much less expense by de-escalating the lawyer arms race and applying public funds to rental subsidies rather than lawyers. 80% of cases are about non-payment of rent.

Our free solution to more equal representation: Start by letting officers of LLC’s represent their LLC.

In 2016, MassLandlords published “Eviction Study for Massachusetts Part One”, a detailed assessment of 8,000 cases filed in Housing Court in 2014. This study of eviction data produced several key findings. There were statistically significant differences in the length, and therefore the cost, of evictions in Housing Court vs. District Court. For instance, a case filed in District Court was 30% more likely to end before an unpaid rent judgment reached $1,500, whereas a case filed in Housing Court was 18% more likely to accrue over $10,000 in unpaid rent.

The study controverted a then-frequent renter advocate refrain. Advocates used to say that evictions could be accomplished in as little as seven days, intending to argue that evictions were not lengthy. The eviction study clearly demonstrated that the average court time was 38 days, with the longest being one year, three months, two weeks and two days before the landlord was finally awarded possession. The seven-day eviction timeframe applied only to mediated agreements for judgment.

The study placed court duration in the context of notice and repair time, which for a landlord adds to length of an eviction above and beyond court time.

The cost and delay associated with a court eviction mean that most mom and pop landlords attempt to negotiate with renters rather than filing for eviction.