Two Senate-sponsored bills that would have enabled the return of rent control in Massachusetts have been sent to study, meaning they will not become codified into law. 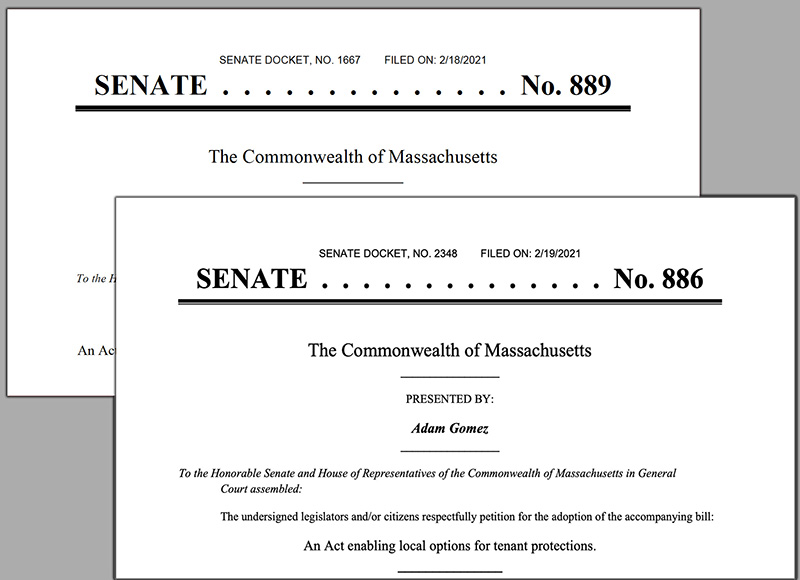 Two bills that would have brought rent control back to Massachusetts have been sent to study and will not be signed into law.
Lic: CC by SA 4.0 MassLandlords Inc.

Senate bill S.886, entitled “An Act enabling local options for tenant protections,” was proposed by representative Mike Connolly. Had it passed, it would have re-established statewide rent control, a practice that was banned by voter referendum in 1994. It would have enabled municipalities to establish their own rent control policies on a local level. The bill also allowed local options for just cause evictions and anti-displacement zones, as well as rent caps and regulations on fees. Cities and towns could opt to enact some, none or all of the options. You can read about our opposition to this bill here.

Senate bill S.889, “An Act relative to the stabilization of rents and evictions in towns and cities facing distress in the housing market,” was the companion bill to S.886. It sought to allow cities and towns the option of limiting rent increases and adopting rules surrounding just-cause evictions.

If Not Rent Control, What?

We maintain that rent control does not work to fix housing displacement issues, and would have been concerned had these bills passed. However, there is plenty that can be done to address housing concerns for Massachusetts residents. In the short-term, rental assistance, both temporary and through voucher programs, will help alleviate the problem.

The issue with short-term rental programs such as RAFT is ensuring that those who need help have an equal opportunity to access assistance and have their applications fairly administered. We heard so many stories about renters struggling to obtain RAFT assistance during the pandemic, and data surrounding rejected applications remains incomplete. The state is continuing block our access to records that may show where the biggest gaps in coverage fell.

To fix the problem, it is imperative we understand what happened so we don’t make the same mistakes again. It’s why we don’t want to see rent control return to Massachusetts, and why we’re pleading for transparency from the state regarding RAFT applications. Anything less does a disservice to the commonwealth.