A Follow-up on RAFT rejections during Covid - MassLandlords.net

Blog » A Follow-up on RAFT rejections during Covid

The Massachusetts’ RAFT (Residential Assistance for Families in Transition) program has helped many families throughout the state over the years. It can keep families who are at risk of becoming homeless in their current housing. It can help families who have lost housing get set up in new homes. It can even help with furniture and utility bills. 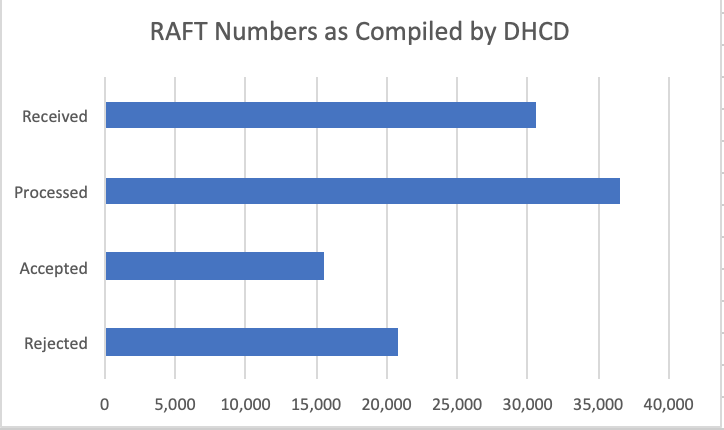 Confused by these numbers? So were we. They make sense, but only because the data were given exceeded the timeframe we requested.
Credit: CC by SA_4 MassLandlords

In the past, we have criticized the RAFT program for perhaps not being all-encompassing enough. However, when the Covid pandemic began, RAFT increased its funding limits and opened its eligibility pool to more members by changing qualification guidelines.

However, we at MassLandlords also began to hear about delays in processing RAFT applications and backlogs. Commonwealth magazine had an extensive article about RAFT delays, which prompted us to submit a public records request for some data surrounding RAFT applications.

After DHCD asked for and obtained the maximum statutory extension of time for responding to the public records request, we received our data in April 2021.

We wanted to know some basic information about the period from April 2020 onward, and we requested just four numbers: (1) the number of applications received; (2) the number processed; (3) the number accepted; and (4) the number rejected. After seeking and obtaining the maximum extension of time for responding, DHCD produced the numbers. Here they are:

We were struck by the proportion of applications that the administrators rejected, i.e., 57%.

The key eligibility criterion (household income of up to 50% of Area Median Income) is not so stringent that such a reasonable observer would expect such a high proportion of tenants to be rejected.

Some rejections might be an unintended (but completely foreseeable) consequence of Chapter 257, the law that creates an incentive for non-eligible people to apply for RAFT. Namely, this refers to the fact that simply applying will put eviction proceedings on hold. Applicants know they do not qualify but apply anyway to take advantage of automatic stay of summary process proceedings, judgments, and executions. It seems reasonable to expect some gaming of the system, but there is no way to tell if this is statistically relevant.

We may not know the cause, but we know the effect. A high rejection rate will have a disproportionate impact on renters who are people of color.

About 35% of all Massachusetts households are renters as opposed to homeowners. But among Black/African-American households the proportion living in rental housing is closer to 60%.

Based on those figures, it is likely that the percentage of RAFT applicants who are Black/African-American is significant. For this reason alone, if the system is set up in way that leads to an unusually high number of rejections, with the effects falling disproportionately on Black/African-American applicants, it needs repairing as soon as possible.

We sent a follow up to DCHD asking why the rejection rate for RAFT applications was so high.

Part of the answer seems to be that some applications have been “rejected” for being incomplete. It is unclear to us how this happens. If an applicant sought to click “submit” before completing any of the fields on the form, they would not even be able to find the submit button. At least some fields like name are now mandatory. Perhaps in an earlier version of the form such fields were not mandatory. Perhaps one or more of the regionals, which each administer their own application processes, have variably designated incomplete sets of fields as required. Perhaps the conditional logic under which some fields are required is too complex for the intake form software to enforce.

Suffice it so say, getting rental assistance is not like ordering pizza or booking a haircut, where if you do not enter all the necessary data, you cannot place your order or set up your appointment. The system is clearly taking incomplete applications and there doesn’t seem to be a solution at the present time.

With incomplete applications, do the RAFT administrators reach out and help applicants re-apply? If so, how much effort and what phrasing is used to encourage applicants to reengage? It stands to reason that applicants without a government issued ID, without a social security number, or without a strong grasp of administrative rules would be easily deterred by notice that their application is incomplete. How many rejected (but eligible) applicants go back and re-apply? That is something that we are trying to find out.

At the end of May, we will send another public records request seeking a detailed breakdown of RAFT rejections for that month. We gave DHCD a heads-up to let them know about our forthcoming request. By setting a short amount of time, and putting it in the future, this should eliminate the need for any extensions of time for responding and provide us (and the public as a whole) a clear set of data.

This article will be updated as we receive further information.