On July 26, 2022, Gov. Charlie Baker signed Massachusetts’ own version of the CROWN (Creating a Respectful and Open World for Natural hairstyles) Act into law as part of Chapter 117 of the Acts of 2022. This law prohibits discrimination based on race-related hairstyles in the workplace, schools and other public places. 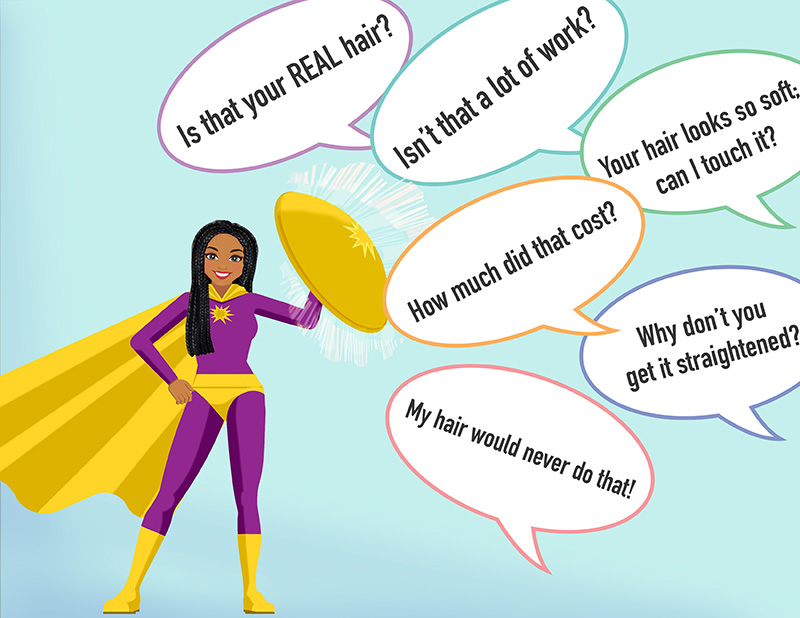 Avoid excessively commenting on someone’s hairstyle, especially if it’s not relevant to why you’re meeting. Sometimes it takes a superhuman effort to ignore invasive questions. This woman is smiling at her success at deflecting them.
Lic: CC by SA 4.0 MassLandlords Inc.

By signing this into law, clauses of MGL Chapter 4, Section 7 have been amended. Clause 62 amends the protections afforded under “race” to include “traits historically associated with race including, but not limited to, hair texture, hair type, hair length and protective hairstyles.” Clause 63 has been amended to further define a protective hairstyle.

This in turn expands the definition of “race” across other statutes, including the state’s anti-discrimination law and the public accommodations law.

This change is a variation on the original bill, H.4554, which created a new protected class for natural and protective hairstyles. The original bill was quite lengthy, as it would require changing every place in the law where protected classes were mentioned (including Chapter 151b, which affects housing providers). The amended bill was much shorter and did not create a new protected class. Instead, it amended the state’s definition of race to include protective hairstyles. As race is already mentioned in anti-discrimination statutes throughout the law, it was not necessary to individually modify each mention of protected classes, hence the shorter length.

In other words, Chapter 151b is still modified by this law, even though you will not see the phrase “protective hairstyles” explicitly mentioned.

What are Protective Hairstyles?

According to the law, protective hairstyles include (but are not limited to) “braids, locks, twists, Bantu knots, hair coverings and other formations.” The purpose of protective hairstyles is to keep the ends of hair strands covered or tucked away, in order to minimize manipulation of the hair strand, which can lead to breakage. A protective style helps prevent knotting and helps maintain root and hairline health by changing where tension is placed on the scalp.

What Does Prohibiting Discrimination Based on Hairstyles Have to Do with Landlords?

We certainly hope that you aren’t basing your tenancy decisions on what hairstyle your renters have, or attempting to put clauses in your lease that prevent people from wearing protective hairstyles. In that way, housing providers are not going to run into the same issues that workplaces or schools may encounter.

However, now that protective hairstyles are protected by anti-discrimination laws, making comments about someone’s hair could be perceived as discrimination, either based on their hair or their race. Very few white people will likely need to wear a protective hairstyle, and therefore, remarks about hair may have a disparate impact on people of other races.

The clear thing to avoid is any negative statements about someone’s hair. Making a disparaging comment about how a potential renter’s natural hairstyle looks “unprofessional” could lead them to believe you don’t want to rent to people who appear unprofessional, or people of their race. But you need to be aware of how other comments can be perceived as well.

Even seemingly positive comments can be inappropriate if the person feels you are singling them out about their hair. Remarks like “Wow, my hair would never hold a style like that!” or “I wish more people would get braids like yours” can make someone uncomfortable. Asking how long a style took to achieve (some braided hairstyles can take hours) or how much it cost to get put in is not professional, since you aren’t meeting with this person to discuss their personal style.

While we’re on the subject, remember that certain protective styles can involve synthetic hair, or human hair that has been purchased from outside sources. Some people prefer to wear wigs. Avoid asking people if that’s their “real” hair, and do not touch it or ask to touch it. That puts the other person in an awkward position, and also may defeat the purpose of having a protective hairstyle, if the goal is to minimize how much the strands are manipulated.

If you’ve read our other articles on discrimination, you know that most of this boils down to one simple adage: Don’t talk about things that aren’t relevant to the task at hand. Someone’s race or ethnicity, sexuality, veteran status, age or any of the other protected classes in Massachusetts aren’t going to determine whether someone is a good fit for your rental unit, and neither will their hairstyle. Keeping things professional and on-topic is the best practice for any landlord.