MassLandlords members are now primarily concerned with opposing the return of rent control to Massachusetts. This policy proposal is currently receiving a higher score and more consensus than any other issue on the survey. Close behind rent control is opposition to right of first refusal and just cause eviction, and support of rent escrow and security deposit reform. 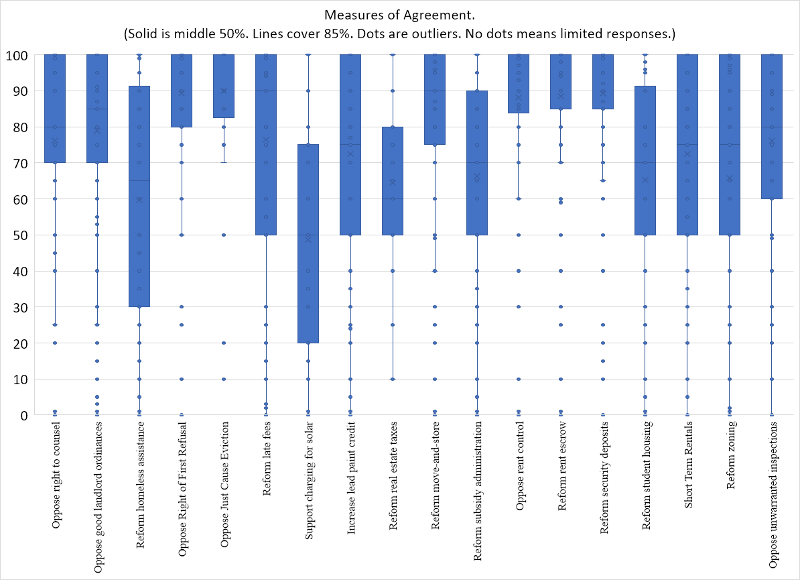 MassLandlords is democratically governed by members, both in terms of our annual election for directors and also in terms of our ongoing policy priorities survey. The survey uses “score voting” on a range of issues, where a score of “100” means ‘do this immediately’ and a score of “0” means ‘never do this.’ A score of “50” represents total indifference.

Policies are proposed by MassLandlords staff and worded in such a way to be specific and well-defined. If a policy proposal initially generates indifference, we talk with owners and modify the proposal to generate greater consensus. Or we replace the proposal with something else entirely. All past data are saved so we can track evolution of policy positions over time.

Right of First Refusal would prevent owners from selling to their children or to an LLC they own, until owners first gave renters six months to purchase the property.

Just Cause Eviction would stipulate the reasons an owner is allowed to terminate a tenancy, granting some renters tenancies for life and preventing gut rehabs.

Rent control would restrict prices, discouraging investment and possibly resurrecting the rent control boards of the 70’s and 80’s.

These proposals were all filed without owner input or consideration.

May 2019 Results Hint at Causes of Housing Crisis

MassLandlords members strongly support with consensus rent escrow and security deposit reform. The laws as they stand today hurt owners, who in turn pass the costs on to renters.

Rent escrow is the attempt to stop the “free rent trick,” whereby a tenant manufacturers habitability claims to avoid paying rent. The court takes months to drive the process to conclusion, at which time the renter leaves owing months of rent. Ordering rent be escrowed during habitability disputes would separate legitimately aggrieved renters from free-rent tricksters. One couple have stolen more than $161,000 in rent over 24 years of free rent tricks.

Security deposits are intended to offer a way to keep rents low by offsetting risk of property damage. In Massachusetts, good faith errors result in owners paying renters three times the amount of the deposit plus attorney’s fees. Owners may now refuse to take a deposit at all, instead seeking to cover risks by charging higher rents. The law should be reformed to give judges discretion on fines in the case of good faith errors. Security deposit non-compliance ended one eviction where the owner owed the renter $3.26 in interest, even though the renter owed the owner $3,900 in rent.

We continue to fail to find an issue related to climate change that we can agree on; clarifying the rules on charging renters for solar electricity is a point of indifference, overall. Likewise, the creation of a landlord-tenant guarantee to help prevent homelessness is increasingly interesting to some, but overall not generating strong interest or consensus. These proposals may be reworded or replaced in the future.
Members can update their priorities online.