A pair of Massachusetts renters were recently discovered to have summary process judgments to their benefit totaling $161,266.17. They appear in public court records thirteen times in cases dating from 1993 to the present. 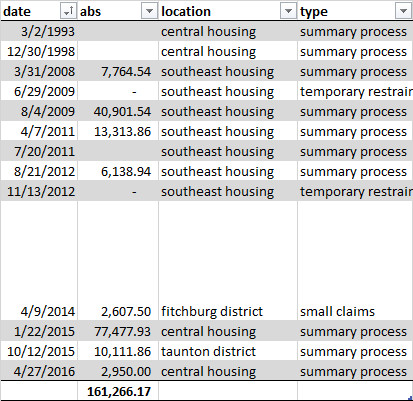 A table showing file dates, amounts of benefit to the tenant (assuming these are never paid), and court jurisdiction.

Two of the cases predate electronic records of judgments, such that these amounts, if any, are not reflected in the total. The record also shows a number of suits brought by non-housing small businesses, such as banks and auto dealers, also not reflected.

Although the full case transcripts have not been reviewed by MassLandlords, based on what we have seen, we can classify these renters as “professional tenants” carrying out the “free rent trick.”

They have alternated from southeast to north- and south-central Massachusetts. Their confirmed “free rent” benefit per month has averaged $559.95 per month for 24 years. Their actual, non-public benefit could be much higher.

How the Free Rent Trick Works, and How to Stop It

The current rent withholding law is basically good, but has a loophole.

Imagine you’re renting an apartment, and your landlord turns out to be a slumlord who never responds to maintenance requests. MGL Chapter 239 Section 8A will rightly allow you to stop paying rent to get your landlord’s attention. When the landlord tries to evict you for nonpayment, the law will protect you and order the premises repaired. When the repairs are complete, you will pay a reduced rent owed and your eviction will be stopped.

Now, here is the loophole.

If you were a dishonest tenant, you might have purposefully damaged your apartment – broken the pipes under the sink, torn the window screens, loosened the electrical outlets – to abuse the law. This is the so-called “free rent trick.”

In 2014, MassLandlords identified 262 tenants who were in court twice in ten months. 13 were in court three times. Two were in court four times. Many more tenants use court processes to cover their insolvency, but since they do this only once, they cannot easily be detected by our studies.

The couple identified here were brought to our attention by an owner screening carefully, who posted their data to our private message boards. This is the first time we have attempted to identify any single tenant across all the years of public records. We have independently confirmed the figures presented here.

Landlords are advised to review MassCourts.org for each applicant and get both sides of the story. Landlords are currently allowed to decline to rent to anyone with unpaid judgments against prior landlords. Landlords are also advised to use a written conditions statement, even if a security deposit is not taken, and to renew it in writing annually.