MassLandlords’ 2021 lawsuit against the Department of Housing and Community Development (DHCD) has revealed that more than half of all applications for rental assistance have been not approved. Up to one-third of these have been lost to state supervision among the regional administering agencies.

We filed the suit to provide public oversight into whether the commonwealth may have inadvertently systematically discriminated against certain households that applied for pandemic rental assistance.

Since Nov. 28, 2020, the commonwealth has received approximately 151,000 applications for emergency rental assistance through its 11 regional administering agencies (RAAs), according to an affidavit filed by Amy Stitely, Director of Programs for DHCD. We have paid out $460 million of rental assistance to 58,585 households. This is an accomplishment for us in Massachusetts. Prior to the pandemic, our rental assistance safety net was approximately 10% the size in terms of staff, and 5% the size in terms of funding. Many DHCD and RAA staff worked days, nights and weekends to accomplish this roll-out. For this we should all be grateful.

Prior DHCD presentations indicate that the vast majority of non-approved applications were not denied due to ineligibility or fraud. A Sept. 21, 2021, presentation by DHCD to stakeholders, including MassLandlords, estimated that just 5% to 10% of applications were ineligible or fraudulent.

Some of those outstanding applications will surely be fraudulent or otherwise ineligible. If we take DHCD’s previously estimated upper limit for ineligibility, then 15,000 of the 90,000 applications will be rightly denied. The remaining 75,000 may have been snared as part of the “time-out” process. 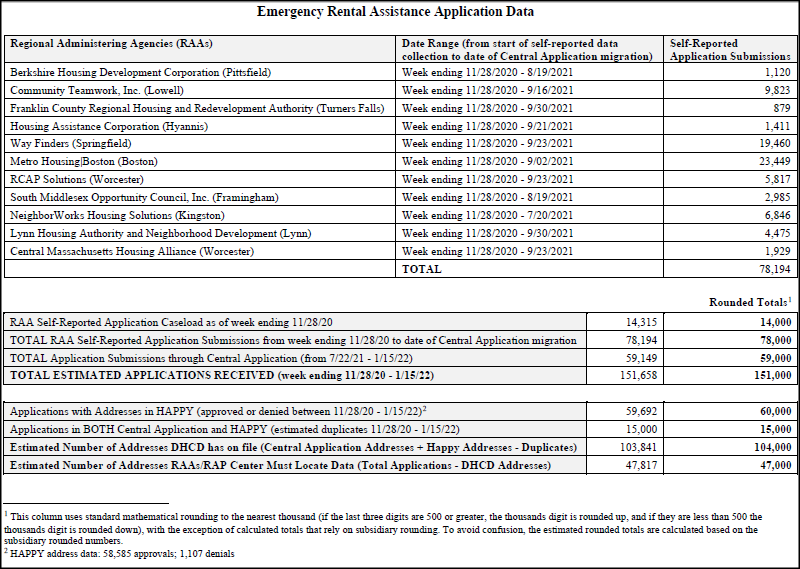 The Stitely affidavit accompanying DHCD's motion to dismiss MassLandlords' suit shows how many applications are sitting in each regional administering agency's files. Elsewhere in the text we learn that all approvals exist in HAPPY, the state payment system. From this we infer the remainder are denials. Public Domain.

One common reason for a “time out” is lack of documentation. For example, an applicant may be asked to upload a copy of their lease. In some situations, the landlord and the renter may be operating on a handshake, or the renter may have simply lost their copy of the lease. In some situations, the true lessee may have previously left, and the current applicants are not formally authorized to be subletting.

To prevent inadvertent systematic discrimination, the RAAs must notify timed-out applicants of their application’s shortcoming in an appropriate language. Also, the RAAs must use appropriate discretion to facilitate alternative forms of documentation. It appears this may not have been happening.

Furthermore, the RAAs and the commonwealth are obligated by federal law to affirmatively further fair housing. In other words, they must actively analyze patterns of racial segregation and take action to integrate communities. In MassLandlords’ staff view, this would begin with tracking applications for assistance and denials, including where these are happening, and what can be done to help everyone remain housed.

In July 2021, MassLandlords sent a letter to Mike Kennealy, Secretary of the Executive Office of Housing and Economic Development, which oversees DHCD, alerting him and others to the potential for inadvertent systematic discrimination. We received no reply.

That summer, we also submitted a public records request inquiring about DHCD’s antidiscrimination procedures and data collection. DHCD’s response indicated they had no such procedures or data.

On subsequent stakeholder Zoom meetings between the trial court and DHCD, we asked to compare applications for rental assistance to eviction records in order to see who slipped through the cracks. Our goal in requesting this information was to help these applicants. Chief Justice Carey, Undersecretary Jennifer Maddox and Amy Stitely expressed interest, but did not follow up.

Following this, MassLandlords filed public records requests with DHCD for this data in order to perform the comparison ourselves. DHCD refused, citing renter privacy. Our records request asked for addresses at which rental assistance had been proposed, application dates and status (whether approved, denied, or timed out). However, privacy does not seem to be DHCD’s main concern.

Is DHCD Moving to Dismiss for Privacy or Cost?

DHCD’s motion to dismiss has approximately one paragraph addressing privacy concerns, and 40 pages concerning the cost to collect the requested data. It turns out DHCD does not have records of nearly one-third of these applications.

In her affidavit, Stitely writes, “Based on DHCD’s observations of RAA business practices while supervising the RAAs, and on information and belief, DHCD expects that these applications may be stored in boxes either on-site at the RAAs or off-site at storage facilities (in the case of paper applications, or in cases where RAAs preserved the electronic record by printing a hard copy)...”

According to this affidavit, DHCD has no oversight or data for 47,000 applications that were received, but ultimately not approved. Landlords and renters have called and emailed MassLandlords unprompted to share stories of being “timed out” or having to upload the same documentation multiple times (e.g., Posco and Hong).

DHCD’s motion to dismiss is primarily based on the cost of organizing these records. They estimate $200,000 in mailing costs to notify renters of the data release, as well as approximately 40 full time equivalent working for a month or more to search boxes for missing applications. DHCD claims in their motion that these costs are unaffordable.

Separately, DHCD has reportedly issued a request for proposals, offering up to $800,000 to agencies who can identify fraud.

MassLandlords’ estimate based on the data above is that the state’s liability for systemic discrimination may turn out to be 10 times greater than for fraud.

MassLandlords was due to file our opposition to dismissal after writing this article February 16, 2022. We expect the case will not be dismissed and that we will have a hearing in late February or early March. We will publish another update at the next event.

Let's create better rental housing by patching these holes in the safety net.