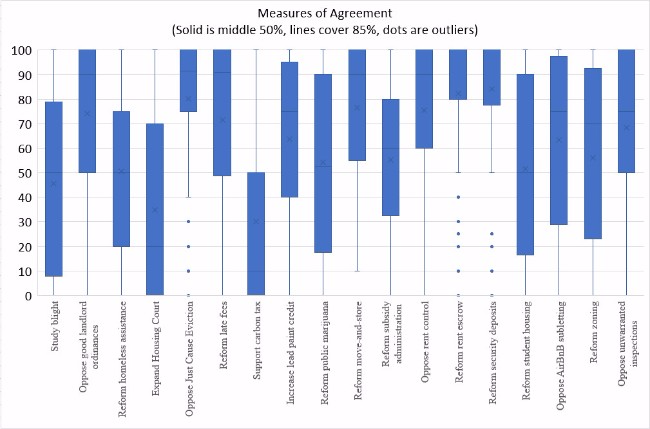 As of July 6, 2017, MassLandlords members were voting strongly in favor of security deposit reform and rent escrow. There was also strong opposition to just cause eviction, feared to spread outside Boston. Disagreement over blight, marijuana, and student housing suggested alternative policy propositions.

Members in good standing can access the policy priority survey at any time. Unlike ordinary surveys, the policy survey saves the last entries with a timestamp. If a member changes their mind about an issue, they can update just that one issue. In this way, MassLandlords can get real-time information on member sentiment.

The survey uses “range voting.” “Zero” means “Don’t do this” and 100 means “Do this immediately.” Members may leave items blank. Blank means “I don’t know”.

The scores can be summed to show total votes. They can also be averaged to show average vote. They can also be looked at in terms of minimum and maximum values, to see if there is disagreement on the importance of an issue. Aggregate voting can be tracked over time. MassLandlords’ official policy priorities will shift according to this democratic input.

Currently 4% of members have weighed in on any issue. Data discussed here do not reflect anecdotal evidence from conversations with hundreds of event attendees over the last year, which have been consistent with the survey. 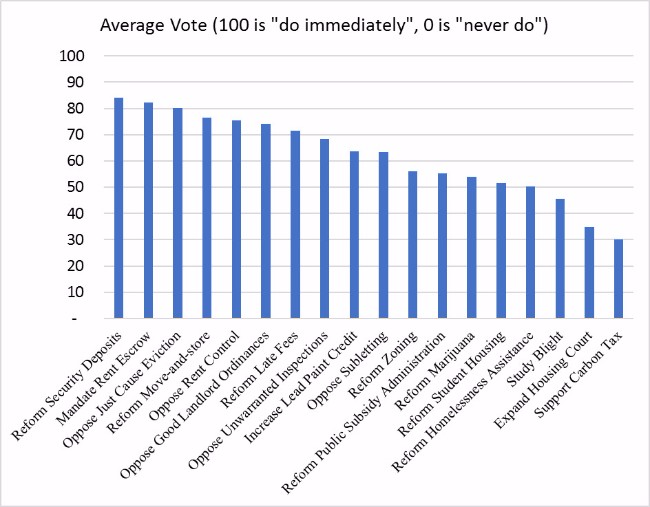 Average scores above 50 are considered signals of support for an idea. Below 50 signals opposition.

The number one issue relates to security deposits. The wording of the survey was, “Work with the state to eliminate triple damages where errors were made in good faith.” This is certainly a sore spot for landlords. It had the most total votes, the highest average vote, and the least disagreement over priority.

Triple damages would still be allowed under the consumer protection statute, MGL Chapter 93A. This allows landlords who deliberately steal deposits to be caught and heavily penalized. We don’t know any of these folks, but they’re out there.

The second highest ranked issue in terms of both total vote, average vote, and least disagreement relates to rent escrow. The wording of the question was, “Work with the state to require the escrow of rent during a habitability dispute.”
At issue here is the so-called “free rent trick,” in which tenants who are experiencing economic hardship break their apartment (pipes, screens, walls, etc.) in order to delay eviction. We have written extensively about this.

In March, rent escrow was the number one issue for members. Now rent escrow has slipped to a close second place. It is probably a result of greater member participation since March. The free rent trick casts a long shadow, but guessing from our 2014 eviction study, it may impact only 100 landlords in a year. The security deposit issue may impact closer to 10,000.

MassLandlords filed H 980 “An Act relative to rent escrow” to address this issue.

The issue with the third least disagreement and consistently strong opposition related to a proposal being heard by the City of Boston, called the Jim Brooks Stabilization Act (aka Just Cause Eviction). The wording of the question was, “Work with municipalities to find alternatives to rent control and eviction restrictions.”

Just Cause Eviction is to Rent Control what “certified pre-owned” is to “used car”: brilliant marketing of the same old thing. We have written extensively about it.

MassLandlords has filed a public records request, made one television appearance, and has made offers to the City Council to collaborate on helpful alternatives.

The issues with the most disagreement, with some owners ranking the issue 100 and others 0, related to changes happening around us.

The wording of the marijuana question was, “Work with the state to decriminalize possession and non-violent use in public while protecting owners’ right to prohibit smoke in rentals.”

The current marijuana law makes it possible for a renter to have no place to legally smoke weed. They cannot smoke in public, and the landlord can prohibit smoking in the privacy of their apartment. Allowing only edibles may encourage consumers who prefer smoking to break their lease. Some members strongly agree with the proposal as worded, others strongly disagree.

The wording of the blight question was, “Work with municipalities to determine the causes of abandoned property, including foreclosures, and keep neighborhoods safe and looking nice.”

Blight is an intensely local issue, and MassLandlords isn’t sure what the likeliest solution should be. So we worded this one as a study, rather than as a bill. Some members strongly support a study, others strongly disagree that resources should be spent on this.

The wording of the student housing question was, “Work with municipalities and the state to permit safe occupancy of four or more unrelated individuals in large units.”
There are many older buildings that have been retrofitted to safely house more than four unrelated individuals. A Massachusetts Supreme Judicial Court case confirms that these buildings are not so-called brothels or illegal lodging houses. But local cities still have power to prevent full occupancy. Many do.

Here it may be possible to reword this question to address the impact of college parties on neighbors. Owners and the general public are likely to feel that the proposal, as worded, does nothing to address the possibility of neighborhood disturbance.

The graph of average vote shows that fifteen policy areas are above the neutral “50” score. There are many policy areas owners in Massachusetts would like to see addressed. Items below the “50” neutral score will be used to set opposition positions, or will be eliminated from future surveys as bad ideas.

The graph of agreement shows that just cause eviction, security deposits, and rent escrow are the current hot-button issues for members. We will continue to prioritize opposition or support, as appropriate, in our policy work.

MassLandlords is a 501(c)6 trade association for owners of rental property and their service providers, like tradespeople, attorneys, accountants, etc. All members in good standing can participate in the survey. 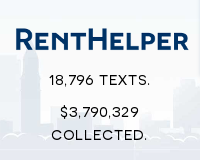 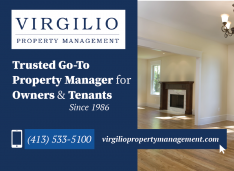