A lawsuit brought by MassLandlords that would force the Department of Housing and Community Development (DHCD) to release data that could shed light on a high percentage of non-approvals and timed-out applications for rental assistance during the Covid pandemic has been dismissed by Suffolk Superior Court Associate Justice Jackie A. Cowin. 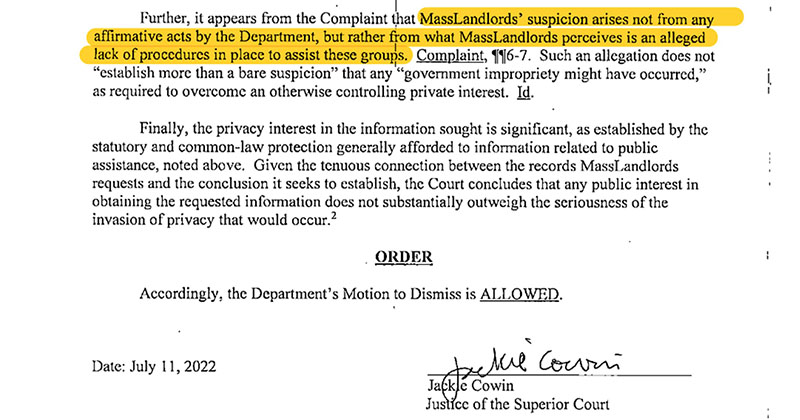 The final page of the MassLandlords lawsuit dismissal by Justice of the Superior Court Jackie Cowin illustrates her mischaracterization of the case. We have outlined a section to show the incongruity of her judgment with what our lawsuit actually intends: to force the release of DHCD data that may determine if rental assistance applications were inadvertently timed out or otherwise errantly not approved. Our suspicion is borne out of tens of thousands of applicants being rejected for rental assistance and, we suspect, many of them subsequently evicted from their homes. We aim to determine if this injustice was the result of DHCD’s “alleged lack of procedures.”

The MassLandlords lawsuit was filed in December 2021. It followed several public information requests to the agency, beginning in June 2021, seeking the release of addresses (but not names) listed by applicants for rental assistance that had been denied due to non-substantive reasons. Those requests were repeatedly denied by the agency, partly on the grounds that the records were not readily available. Further, DHCD estimated that the retrieval of requested records – including a batch of some 47,000 applications that couldn’t be accounted for – would require hiring 39 full-time employees working approximately four weeks at a cost of $200,000.

MassLandlords intended to compare the address records of timed-out rental assistance applicants with publicly available (via trial courts) addresses of tenants in summary process cases. By doing so, we hope to determine if thousands of timed-out and rejected applications led to tenants being wrongly evicted. MassLandlords has reason to believe, and is seeking to verify, that a disproportionate percentage of rejected rental assistance applications were submitted by people of color, immigrants, families with children and people with disabilities. The court petition to force release of data was a step toward determining if that had been the case.

DHCD entered a motion for dismissal of the lawsuit on June 15, 2022, which was heard by Justice Cowin. DHCD attorneys argued in the hearing that the release of the requested addresses would constitute a violation of rental assistance applicants’ privacy rights.

Attorney Pierce Cray, arguing for the state, also emphasized the need to protect the privacy of applicants for rental assistance, particularly when the state fails. “It would make no sense for a person’s privacy protections to vary with organizational performance,” he said. “It would be perverse to waive privacy if the state were doing a bad job.”

Absent from Cray’s argument was a mention of what public recourse should be when the government does not provide adequate service. His argument misses the irony and the conflict of the government disallowing recourse when it does a “bad job”  – for example, when thousands of applicants for rental assistance potentially are evicted from their homes because their applications inexplicably time out or are rejected without explanation.

The motion for dismissal did not refer to earlier claims that such data approval would require untenable staffing requirements and expense.

MassLandlords’ request and court petition argued that the right of the public to know if the state agency is disproportionately rejecting rental assistance applications of people of color, immigrants, families with children and people with disabilities outweighs applicants’ right to privacy.

MassLandlords also contends that the addresses listed on rental assistance applications, by themselves and without tenants’ names, do not identify applicants and should be publicly available information.

Our intention is to conduct a statistical analysis. We want to compile an overview that contrasts the addresses of rejected rental assistance applications with addresses involved in summary process cases that resulted in eviction. Our hope is to discover if demographic trends exist among people who were not approved for rental assistance.

In her dismissal of the petition, Judge Cowin states that MassLandlords did not satisfy its legal burden of demonstrating that the information it seeks justifies divulging what the court calls personal information, i.e., the address of an applicant seeking rental assistance. (Judge Cowin contends that, while the MassLandlords lawsuit only seeks addresses of applicants and not their names, it does not sufficiently guard their privacy because it would be possible to later match names with addresses through housing court records.)

In the dismissal, Judge Cowin also notes that MassLandlords did not satisfactorily argue its need to obtain applicants’ addresses for the purpose of determining if non-approved applications were disproportionately affecting people of color, immigrants, families with children and people with disabilities.

“MassLandlords has not described how, once it matches an address provided by the Department to a name involved in a summary process action, it will be able to determine that the person(s) involved belong to one of the suspected groups, without accessing some other type of private data,” she writes in the judgment. “It is thus doubtful that the information sought will truly advance any public interest.”

MassLandlords’ appeal will point out that we have methodologies available to determine large-scale demographic trends without the need for specific, individual and private demographic information.

Judge Cowin’s dismissal concludes that the protection of the privacy legally assured applicants for rental assistance overrides MassLandlords’ request for the data it seeks in the lawsuit.

“Given the tenuous connection between the records MassLandlords requests and the conclusion it seeks to establish, the Court concludes that any public interest in obtaining the requested information does not substantially outweigh the seriousness of the invasion of privacy that would occur,” concludes the judgment to allow the DHCD motion to dismiss the petition.

We see these statements as egregious legal overreach and a projection by Judge Cowin that mistakenly presupposes MassLandlords’ intent without having fully heard our case, and clearly not understanding it. For a judge to assume and state that MassLandlords is wrong in its contention that there is public interest, without having considered what the public interest might involve, is a legal error and warrants strong reconsideration.

The lawsuit dismissal is not the end of legal action or recourse, and we intend to appeal the judgment and file a motion to reconsider.

In our motion and appeal, we will emphasize what we interpret as gross inattention to our intention and methodology in the judgment to allow dismissal. The associate justice wrote in her judgment that the right of the public to know what has taken place to result in such high percentages of unapproved applications does not justify releasing private data.

MassLandlords would argue, in part: if a potential miscarriage of justice on such a large scale – in which thousands of citizens may have been evicted from their homes to no fault of their own but to the fault of DHCD agencies – does not justify the release of data that would explain why it happened, what would? And if the state were to admit it did a bad job, as Attorney Cray outlined, what level of incompetence would rise to the level of public interest and recourse?

MassLandlords seeks to know why tens of thousands of applications for rental assistance were timed out or rejected with no substantive explanation on the part of DHCD authorizing agencies. Addresses listed on applications would allow us to statistically compare data from housing courts to determine if application rejections have disproportionately and unjustly affected certain groups. Some applicants, for example, may have language or cultural barriers to completing applications, or may be subject to discrimination.

DHCD received nearly $1 billion from federal and state coffers to assist with housing and provide relief for people who were impacted financially by the pandemic that would help them remain in their homes. The agency distributed less than half of those funds for rental assistance. Yet thousands of applications for rental assistance were turned down or unprocessed without explanation, and many of those applicants, we suspect, were subsequently evicted from their homes.

We would like to know why this happened, and if it unfairly affected immigrants, people of color, families with children and people with disabilities. Only by determining if that was the case can we begin to repair the damage.

Because we view this as an essential investigation, we will continue to pursue the data that we believe will shed light on what exactly took place, despite the recent allowance of dismissal.

We will continue to keep our members updated on this case.

Follow the Appeal at MassCases
The latest case status can be viewed publicly online. "Access SJC and Appeals Court dockets" and enter our docket number: 2022-P-1211 (note, previously we were docket 2022-P-0946, as well).