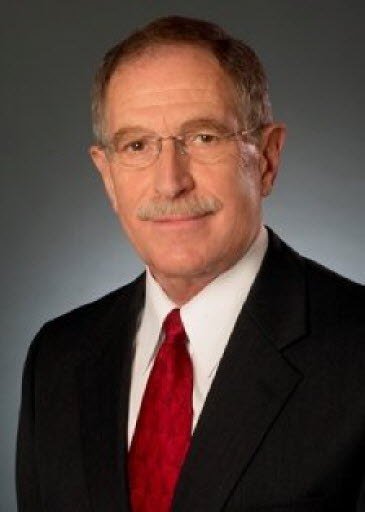 Judge Abrashkin's portrait from when he was named Purpose Prize Fellow by Encore.

MassLandlords marketing for the event had called him a celebrity, in reference to his decision as Executive Director of the Springfield Housing Authority (SHA) not to file certain eviction cases in the Housing Court at which he had previously presided.  Judge Abrashkin spoke on the condition that, out of respect for his colleagues, this not be addressed during the event.

To diffuse any notion of celebrity, Judge Abrashkin quoted the musical Evita: “As for fortune, and as for fame, they are illusions, they are not the solution they promise to be.”

Judge Abrashkin was invited to share his personal thoughts and perspective on public service.

He started his talk by introducing his wife, Maria Acosta-Cruz, and said the secret to happiness in life was your relationships, doing things that you perceived to be useful, and helping other people.

Knowing his audience, Judge Abrashkin added that there was nothing wrong with making money along the way.

Judge Abrashkin took the bench in 1986. Speaking of his court time, Judge Abrashkin shared his insight that it’s a human system. He said whenever one party said “A”, and another party said “B”, he would try to find the truth “C” that lied between them.

He presided over cases for 22 years, hearing literally thousands of cases covering all aspects of housing, including zoning, code enforcement, and eviction.

During the Judge’s time on the bench, the largest landlord in Greater Springfield, the Springfield Housing Authority (SHA), a public agency with 5,500 units under management, was being rocked by a corruption scandal that would result in millions of public dollars stolen, and ultimately send two of its public servants to jail.

One day in 2008, the indictments of SHA staff still a recent memory, Judge Abrashkin had an eviction case that made him see his future differently.

Before him was a woman and her young family with all the problems you could have in life. Judge Abrashkin realized he had been in his job since before she was even born. He wondered whether he couldn’t have done something more to help this woman, to get ahead of the curve before the problems developed. So he applied to fix the Springfield Housing Authority as its new Executive Director.

Judge Abrashkin not only fixed SHA, he went above and beyond. He restored the public trust and confidence by directing a complete overhaul for financial transparency and accountability. And he was an expert administrator to boot, with a long list of accomplishments as a public landlord: he enforced leases and debts owed to the public; made over $20 million in facility upgrades; and, with the City of Springfield, revitalized an entire neighborhood, the South End.

Judge Abrashkin said the cycle of poverty is very real: “they’re stuck.” And he empathized with the people caught in it. His story was very typical, he said. All four of his grandparents were from Europe. They would have thought the SHA was the Taj Mahal. Low-income communities end up in a cycle of disadvantage, isolation, and self-reference.

Young people in bad economic situations often grow up without a vision of a future. Whereas middle class people perceive there is something good out there for them. This hope drives all human progress, he said.

And from this, the Judge derived the basic rule he has followed as Executive Director of SHA: “get’em while they’re young.” SHA emphasizes involving kids in wholesome activities and treating them kindly. And he gives parents the skills to deal with their kids when they’re having fits.

Judge Abrashkin described how SHA brings in services including behavioral counseling. He said these programs do work if you keep at them. Their program “Talk Read Succeed,” a name borrowed from the Davis Foundation, has been going on for eight years.

The teenage years are also a critical time. At SHA, one key staff person, Jimmie Mitchell, “leads kids hungry for constructive relationships.” In his group he has had no teen pregnancy, no severe violence, and no drop-outs.

Judge Abrashkin brought his remarks to a close by saying, “It’s easy to say things are going down the tube, but progress is possible.” He quoted the musical Evita to emphasize this point and tie back to the beginning of his presentation. “All you have to do is look at me to know that every word is true.”

In 2008, the Western Division Court put up Judge Abrashkin’s portrait. In 2014, Judge Abrashkin was named Purpose Prize Fellow for the national organization Encore, which honors innovators over the age of 60 working on social problems. In 2015, the Springfield Education Association honored him with the “Friend of Education Award” for commitment to children’s literacy and family independence. And in 2017 the Federal Department of Housing and Urban Development awarded SHA “High Performer” status for its financial health and the physical condition of its facilities.