In September we asked Massachusetts to pilot a new program based on the success of similar programs in Seattle and elsewhere. We asked that any landlord who takes a homeless family out of shelter should receive the following guarantee:

This insurance program would stack with existing subsidies. For instance, HomeBASE, MRVP or Section 8 would still be used to help the tenant afford the apartment.

We asked for this on the basis of your survey results and the deep statistical data from programs like the Seattle Landlord Liaison Project.

After much discussion, this is the compromise we got:

Do our readers like these changes? In a word, no. As of October 21, we had received feedback from over 155 landlords. 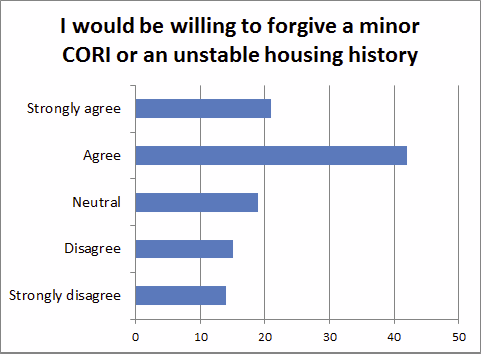 That's a very positive result! It means that a program like the Seattle Landlord Liaison Project should be equally effective in Massachusetts at helping homeless families. By definition, they have unstable housing histories, and they tend to have minor CORI's as well.

Here's where the compromise starts to fall apart. When asked whether the compromise program reduced their risk, respondents tended to feel less agreement with the $5,000 cap, half of what we recommended. Responses to the program we asked for are at left, and to the compromise at right: 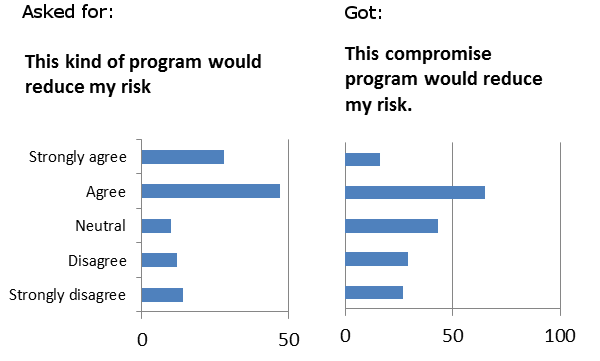 Here are representative statements from respondents:

Large caps are a critical enticement to getting landlord participation.

The Seattle Landlord Liaison Project has data from the last five years of operating a program like this. They average $80,000 per year paid to an average of 12 landlords per year. That's $6,667 per claim. How can they operate such a program?

The key is that they make use of a landlord-focused advisor who can intervene before problems get to the point of costing money. They have housed over 1,500 families and 96% of them have not caused any losses whatsoever. Overall, the few large claims have been far cheaper than housing all these families in shelter.

Landlords understand the need to get good advice when facing the rare disaster. We asked survey respondents about the ability to call a landlord advisor. We saw a very clear signal in the proposed program. The compromise, however, moves the advisor into one of the regional administrators. Results became mixed: 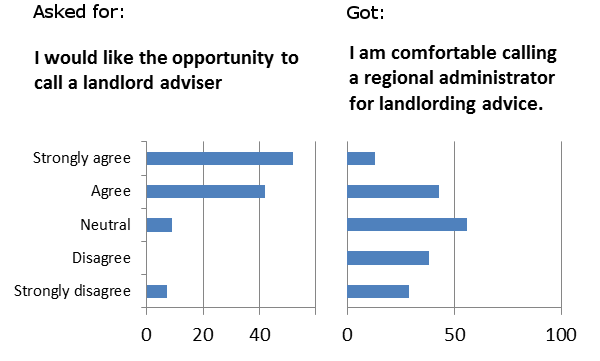 Here are some representative comments, which as the graph shows range from positive to negative:

Having a landlord-focused advisor in a new office is essential to the success of any landlord-tenant guarantee program.

What about the suggestion by MBHP that tenants should receive $2,500 as an incentive for good behavior? This was not part of what we asked for, since Seattle demonstrates that 96% of tenants behave well without such an incentive. Our reader data: 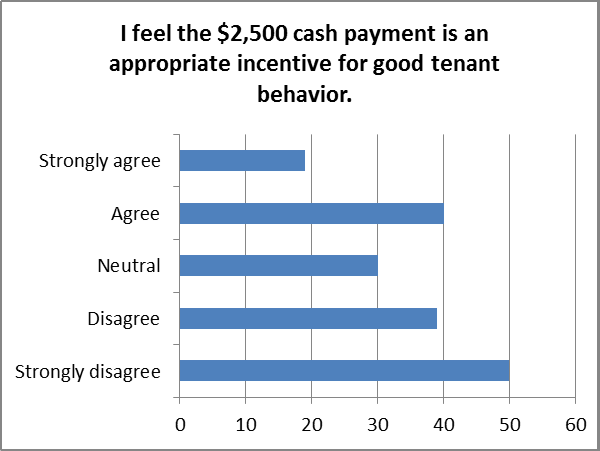 Here there is no clear signal, overall, but some landlords are deeply resentful:

A few are open to the idea:

Our recommendation would be to do what Seattle already does, and to offer a security deposit for the next apartment if there are no claims. That avoids a "bright finish line" at the twelve month mark. The tenant may wish to remain in the rented premises, but the landlord would feel exposed with the reward having already been paid out.

For the homeless, this compromise would be better than nothing. But we need three changes before we can support the program wholeheartedly: