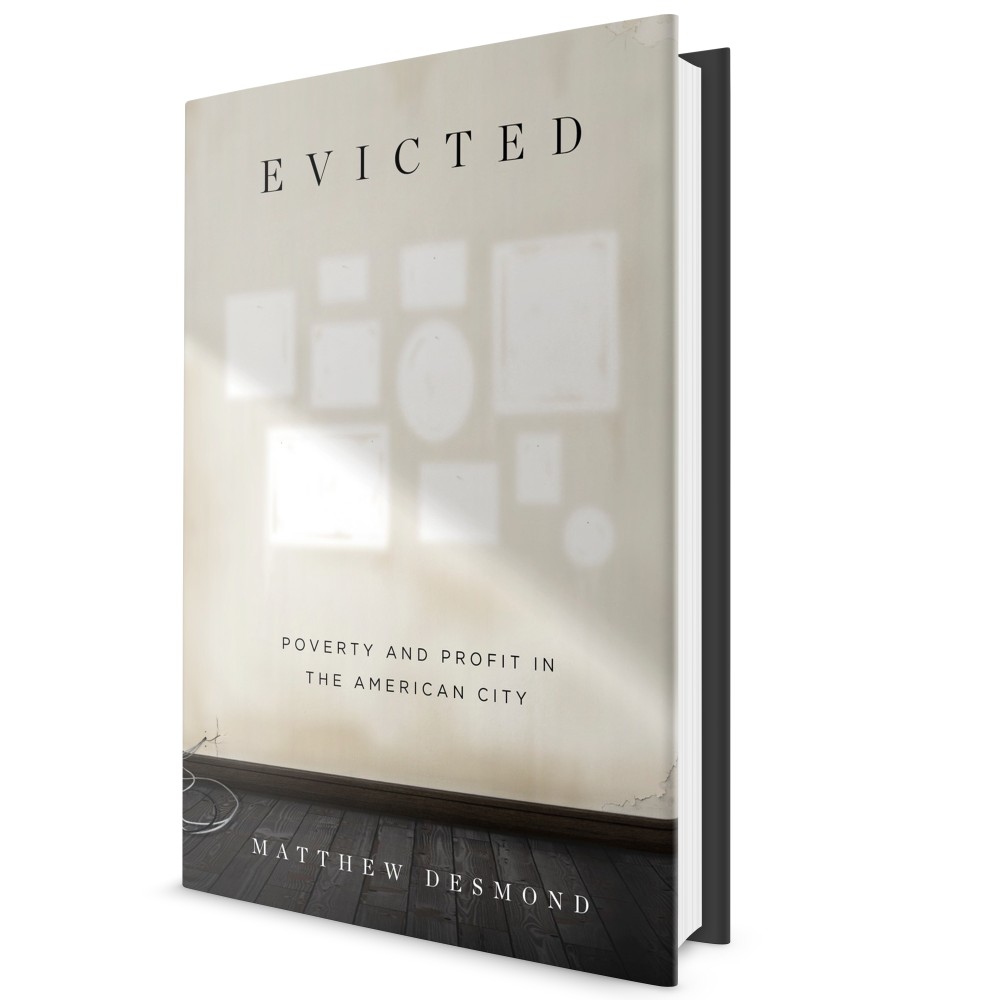 Evicted by Matthew Desmond rates 4.4/5 on Goodreads and 4.5 stars on Amazon

When a new book comes out on the topic of evictions and becomes a best seller, SPOA needs to pay attention to it, all the more so after the recent debate in Boston on just-cause eviction.

Written by Harvard sociology professor Matthew Desmond, “Evicted: Poverty and Profit in the American city” reads like a novel. It tells the stories of landlords and tenants in very-low-income neighborhoods of Milwaukee, Wisconsin.
The book’s narrative reflects the author’s many months living in a house trailer and a rooming house, following in person what happens in the lives of very poor Milwaukee tenants who spend up to 80% or more of their income on rent, and of landlords who make enough money off their low-income tenants to vacation regularly in the Caribbean.

The book is exhaustively researched, and there is no reason to doubt the accuracy of its descriptions. Events like these probably happen in every major inner city in America.

A picture of poor single mothers moving from eviction to eviction

Most of the households are headed by African-American or Hispanic single mothers. Life for these individuals often bounces back and forth between miserable and joyous, but much more often, just plain miserable. Tenancies are short, often lasting from a day or two to several months and occasionally longer. Evictions are frequent, for nonpayment of rent primarily, but also for more than one or two phone calls to the police in a month, for foreclosure of the owner or condemnation by city officials. Landlords decided many evictions on the spur of the moment.

Here is a taste of their poverty-stricken lives:

The foregoing is just a taste. The book consists of many, many more events of a similar character, with the stories and conversations around each one.

This article contributed by the Small Property Owners Association.

The bulk of the book stays very much at the level of events and face-to-face interactions, with little or no commentary or analysis, except in the last chapter. But we readers are free to generalize. The problems of these individuals are the same problems of many very-low-income people and some higher-income people as well.

A major problem is the inability to delay gratification. These tenants cannot organize their lives around a goal. They live very much in the present, but with the pain and trauma of chronic, involuntary relocations. Repeated failures to avoid eviction or get a new apartment sap energy and bring depression, resulting in more failures. How to break the cycle of failure and the psychological states that go with it gets very little attention in the book.

Poverty in the home environment

Poor parenting skills are another general problem that ensures that the next generation grows up into another life of poverty: failure to keep up school attendance, to prod homework, to curb vulgar language, to train good manners, to feed nutritionally, to encourage good sleep patterns, to encourage occupational goals, etc. Closely related is the lack of good schools in poor neighborhoods. But good schools will not work if the more powerful impact of parents does not support the schools. This major problem receives no analysis in the book.

Marriage and men, or the lack of them, is another problem without analysis. Single mothers get larger government subsidies if a husband’s income is not counted, so government policy encourages single motherhood. But the impact of men in the home may be critical. An observation once made of elephants – yes, elephants – found very rowdy behavior in a herd of young male elephants. When older male elephants were introduced, the rowdy behavior quickly ended. Single motherhood (among humans) is a set-up for criminal behavior by children, especially males.

We can group these unanalyzed factors – short-sightedness, poor parenting, single motherhood, etc. – as the culture of poverty. Can we change this culture?

In 1890, Jacob Riis published a landmark book entitled “How the Other Half Lives: Studies among the Tenements of New York,” which at the time – 1890 – captured the attention of civic leaders in New York City and inspired a reform movement. Riis claimed a correlation between the high crime rate, drunkenness, and reckless behavior of the poor and their “lack of a proper home.” Physical determines cultural.

Tenement housing in 1890 was rows of five- and six-story-tall, narrow townhouses packed together, with long, slender floorplans and no light or ventilation except in the front and back rooms. Outhouses stood in what little was left of the backyards. Small industries, like sewing clothes or making cigars, were carried on in the unit. Reform introduced vertical light shafts in the middle of the long, slender apartments, bringing light and ventilation to the middle rooms. Running water and a toilet were required on every level, serving two to four apartments.

Did these improvements help? Not really. “With their attendant problems of crowding, disrepair, lack of sanitation, and crime, tenements have continued to exist,” according to the online Dictionary of American History. Physical may not determine cultural.

One of the world’s largest slums in Mumbai, India

On the other hand, a slum called Dharavi that sits in the middle of the Indian city of Mumbai has survived and even thrived since its founding in 1882. It is a multi-religious, multi-ethnic, diverse settlement of about 1 million people, composed of those who have been pushed out of the city of Mumbai and others migrating from the rural countryside to the city. The houses are one-story shacks of any available material, built smack next to each other. Many include one-room businesses: leather, textiles, and pottery products, often exported around the world, and a burgeoning new industry: recyclables.

Open sewer trenches and human waste thrown into rivers brings disease, but the residents have protested against urban renewal by “experts.” They complained that the redeveloped plans would give them only 236 square feet per household, less than they presently have.

The slum of Mumbai has an entrepreneurial spirit and a $1 billion economy. Together with New York City tenement housing, these examples suggest that the physical environment in and of itself does not determine culture or morality. Efforts to improve sanitation may help on health, but not change much else.

In the last chapter of “Evicted,” Desmond recommends universal vouchers for all people under a certain income level. It imposes rent caps, which is rent control targeted to a specific subgroup in a city. It would still have the effects of rent control: poorly maintained properties that decline to the rent level established, and only the best tenants being accepted. The poorest still might not find housing. And, of course, it would cost a mighty bunch of money the federal government does not have.

Some of the author’s language throws around the usual epithets against landlords: “exploitation,” “overcharging,” “just cash out,” “basic right to housing,” “freedom to profit from rents versus freedom to live in a safe and affordable home.” But at other times, he recognizes that landlords are the most economic providers of housing, landlording is a business that needs to be respected, and to aim for modest housing, not perfection, to make a voucher program feasible financially.

Would universal rental vouchers below a certain income level work? One important clue is a large study by the U.S. Housing and Urban Development Department (HUD) called “Moving to Opportunity,” done in the mid-1990s. The research followed 4,600 low-income households over 10 to 15 years as they used vouchers to move from high-poverty public housing projects to private housing in somewhat better neighborhoods. Most of the households were headed by African-American or Hispanic single mothers, identical to the kind of households in the book “Evicted.”

The results of the study, examined by many researchers, are mixed, as described in the study’s final analysis. Families who moved into better neighborhoods felt safer, and women had less obesity. Both women and female children had less psychological stress and depression. That means that men and boys experienced just as much stress and depression as they did in public housing, and their health did not improve – a zero impact.

Families who moved into better neighborhoods did not get better jobs or achieve higher incomes, and boys and girls were only very slightly less likely to engage in risky or criminal behavior, such as drug use or drug dealing. African-American slang, which affects job opportunities, showed hardly any improvement. Very little or zero impact again.

The idea that rubbing up against people with better cultural habits will improve bad habits is tenuous at best. Moreover, neighbors often object to these newcomers from the projects. They are struggling to get ahead, and the newcomers just make it harder. Is funding a huge housing subsidy program really worth these very modest gains and otherwise zero impact? Or ought we to consider other possible kinds of intervention? Or none at all?

Arguably, what poverty-level tenants need is marriage, with men in the home to supply more income, to help with parenting, and to moderate the behavior of adolescent and juvenile males in particular. We can change government regulation that reduces subsidies when males are in the household. But how else do we encourage marriage? No easy solution comes to mind.

SPOA’s recommendations: Reduce the pain, but no cure is likely

During the Boston debate on just-cause eviction, SPOA opposed it. It is a form of rent control. Instead, we suggested three approaches to the problem of evictions: (1) give help negotiating with the evicting landlord, if only for more time to make a more sensible move, (2) provide relocation assistance, to find suitable neighborhoods in which to search for new housing, and (3) offer psychological counseling, to help the tenant through the ordeal and establish new relationships. These approaches would not necessarily stop evictions, but help alleviate the strain and stress.