RAFT: How many public employees does it take to answer a simple question about case load? - MassLandlords.net

Blog » RAFT: How many public employees does it take to answer a simple question about case load? 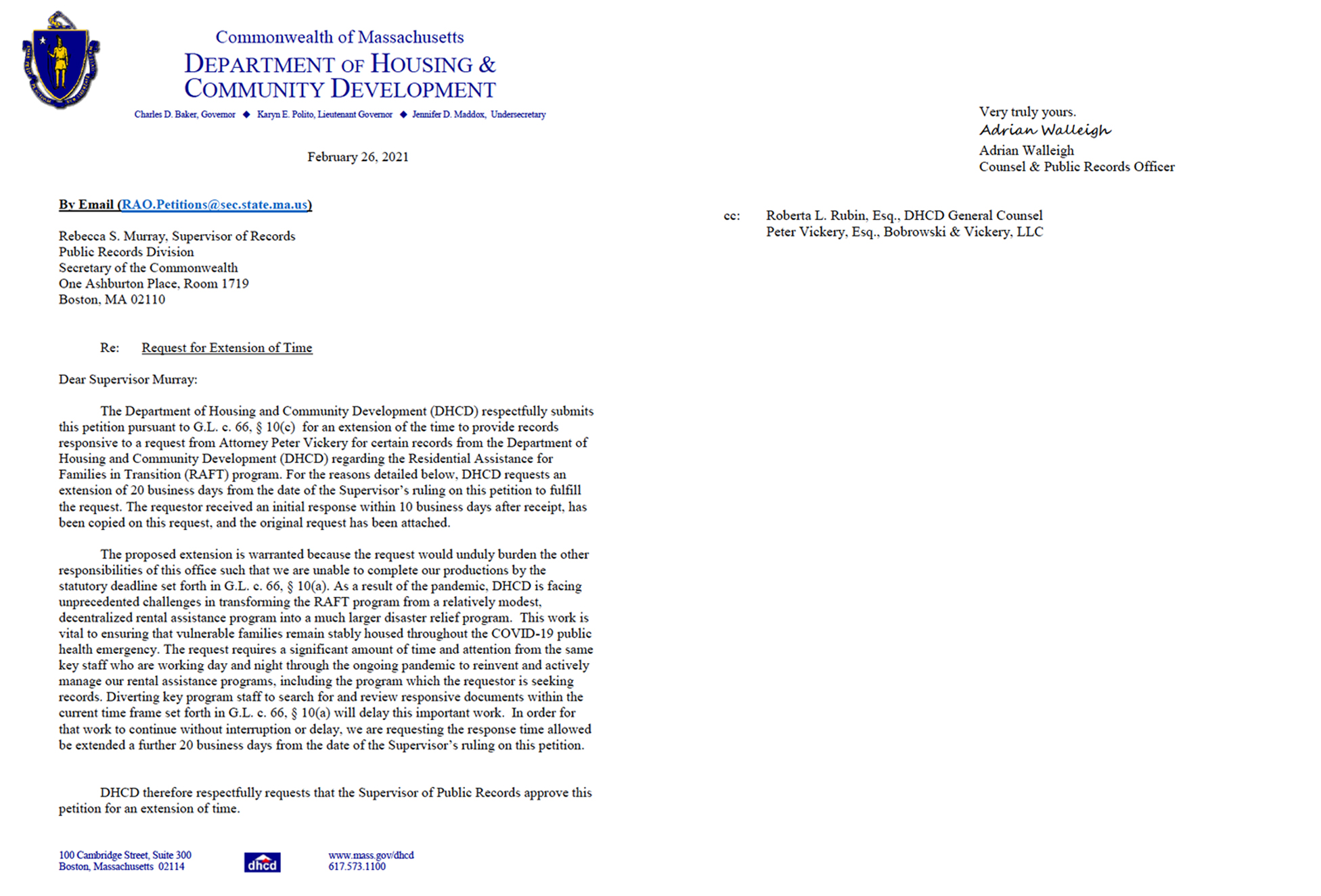 Then, in October, in the aftermath of shut-down and the unfunded eviction moratorium, the Commonwealth provided extra funding for Residential Assistance Families in Transition (RAFT). That was a very welcome step, albeit belated and inadequate. Here at MassLandlords we hear about the long processing times and backlogs. CommonWealth magazine published an article about the problem earlier this year.

Our members care about this bread-and-butter issue a great deal, especially given Chapter 257 of the Acts of 2020, which prevents judicial remedy for nonpayment so long as a RAFT application is pending. So, in order to serve the membership by advocating for a solution, we decided to try to first find out the scale of the problem. For that, we need some basic metrics. Armed with the facts, we can determine whether the performance of State government is: (a) as good as we can reasonably expect in the circumstances or (b) sub-par and in need of improvement. And to get our hands on the facts we turned to Massachusetts General Laws chapter 66, the Public Records Law.

This law provides that when a government agency receives a public records request, it shall “identify a reasonable timeframe in which the agency... shall produce the public records sought; provided, that for an agency, the timeframe shall not exceed 15 business days following the initial receipt of the request for public records.” Fifteen days. That seems like a reasonable amount of time. Not too demanding.

On February 5, 2021, I submitted a public records request asking for some raw numbers:

This did not strike me as a particularly onerous request because these are the sort of numbers any organization needs in order to stay on top of things.

To analogize to rental housing, if somebody were to ask you how many rental applications you had received in the preceding 12 months you would probably be able to answer within a few hours (minutes, possibly) no matter how large your business. If you were in charge of a huge operation (a public housing agency, for example) you might need longer, perhaps even 15 days.

So, I honestly thought that a department with more than a handful of employees (DHCD payroll spends about $13 million on wages and salaries annually), that can rely on 11 outside organizations called “RAFT Agencies” to do the work of administering the program, would have these basic RAFT-application figures ready to hand.

After all, the article in CommonWealth magazine states that “There are over 5,600 RAFT applications under some form of review or processing in Hampden and Hampshire counties alone, as of January 9.” If the figures are available for two counties, they should be readily available for the other 12.

Initially, DHCD said that they would provide the records on February 26. Instead, on February 26, the department requested a 20-day extension, which the Secretary of the Commonwealth granted on March 5. Why the need for so much more time? Well, according to DHCD:

“The request requires a significant amount of time and attention from the same key staff who are working day and night through the ongoing pandemic to reinvent and actively manage our rental assistance programs, including the program which the requestor is seeking records. Diverting key program staff to search for and review responsive documents within the current time frame set forth in G.L. c. 66, § 10(a) will delay this important work.”

Certainly, we at MassLandlords have no wish to “divert key program staff to search for and review responsive documents” when they could be actually processing RAFT applications.

But wait: Remember, all we asked was how many applications they had received, how many they had accepted, and how many they had rejected. Why would DHCD need to pull away front-line employees to answer this simple question, when DHCD employees are not the ones who administer the program (caseworkers, supervisors, and managers in the 11 external RAFT agencies do that)? Why do they not have this information readily available in a spreadsheet?

RAFT is the first of the “funding highlights” mentioned on Governor Baker’s Eviction Diversion Initiative. On the initiative’s webpage, the Baker administration points to “$100 million in emergency rental assistance through RAFT.” In addition, it promises to “streamline the application process.”

But when asked how many RAFT applications it had received and how many it had processed, it did not know. That fact alone deserves to be – and now is – a matter of public record.

At a Housing Stakeholders Meeting convened by Chief Justice Paula Carey on Thursday, March 25, the Department of Housing and Community Development presented the following statistics:

“From that time through Saturday, March 20, 2021, RAAs received about 30,000 new applications for RAFT-ERMA assistance, of which 43% were approved for assistance.

“As of March 20, 2021, based on RAA- and RAP Center-reported data, there were 10,813 applications for RAFT or ERMA currently in process. Of that total: 968 (9%) are awaiting final decision, as all documents have been received and application is in the last stage of review before payment or denial. 6,633 (61%) are in review with a case manager who is in active communication with the household and may be missing information or documentation from either the application, the landlord, or both parties. 3,212 (30%) are not yet reviewed.”

After this meeting, DHCD still had not complied with our public records request.