Blog » Why Smoke Detectors are More Critical Than Ever 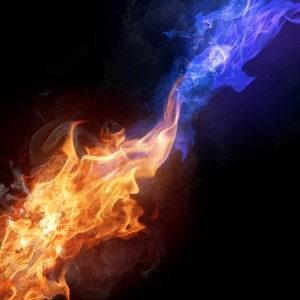 When a piece of fabric burns, what actually happens is a little piece of that fabric gets hot enough to evaporate. This is called pyrolosis. The fabric gas then undergoes an oxidation reaction in the air and releases enough energy to gasify more fabric. This is combustion. If there were heat but no oxygen, the fabric would char. Charring requires constant heat input and is not self-sustaining. Combustion makes enough heat to sustain more combustion.

So when a fire starts, it's not the solid that's burning, it's the gas that came from the solid.

This, by the way, is how candles work. They melt and then evaporate wax. The wick holds the combustion reaction in a single place while the fuel melts, travels up the wick, and turns into a gas.

At flashover, the room is too hot for a firefighter. Why does all this matter to us? Because flashover is happening faster than at any time in history. Look at this video showing two different rooms.

It used to be that homes were furnished with natural fibers, like wood and cotton, as in the room on the left. These require a long time at a high temperature to start outgasing. A room purchased entirely at a lower end store, however, will be mainly synthetic fibers and materials like the room on the right. These are basically forms of plastic. They will all outgas much more quickly.

Here are some amazing statistics from  Underwriter Laboratories.   They tested six rooms, three with "legacy" cotton, three with "modern" plastic:

The Worcester Fire Department put this into sobering perspective when they shared this video with us. The average response time for a truck in Worcester is four minutes from the time 911 is dialed to the time the truck stops outside the building. If the fire is in a modern room, this leaves one minute for the firefighters to act. If the people inside haven't already escaped, the odds are not good.

This is why smoke detectors are now more critical than ever. A building occupant may have as little as five minutes to wake up and clear their apartment, almost all of that time without help from the fire department.

As landlord, you can help your tenants who don't know this new information. You can:
Install tamper-proof detectors (either hard-wired or with a ten year permanent battery)
Check all ordinary detectors at least annually
Most tenants do not realize the life-saving urgency of having a working smoke detector. When the detectors start beeping, some tenants even remove the batteries and pile the dead detectors in a closet. For safety's sake, they should instead get new batteries before they return home that day.