Blog » Why Conservatives and Libertarians Should Support Ranked Choice Voting

This year, you have an opportunity to change Massachusetts politics for good. If you’re fed up with living in a one-and-a-half-party state in which Democrats and Republicans alike trample on your property rights, and if you want give Beacon Hill a genuine shake-up, now’s your chance. 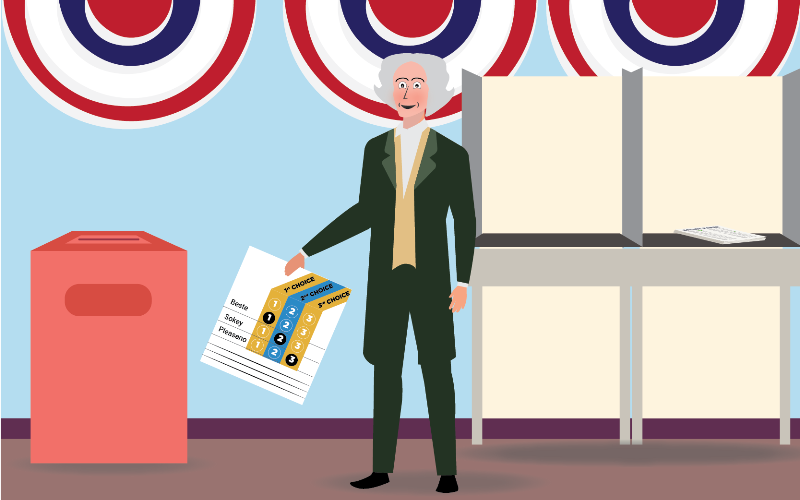 John Adams would be thrilled to cast his vote on a ranked choice ballot in any election.
Image Credit: CC BY-SA 4.0 MassLandlords, Inc.

Question 2 on the ballot offers ranked choice voting (RCV). If it passes, you will finally be able to vote for the candidate you like most without accidentally helping the candidate you like least. Under the current plurality system, small parties that manage to marshal the resources to field candidates risk the spoiler effect: that is, drawing votes away from their ideological allies and unintentionally helping their opponents. Because of this spoiler effect, the plurality system has a chilling effect on multi-party democracy, which is the problem that RCV would solve.

With RCV you will be able to rank candidates in order of preference (1 for the favorite, 2 for second best, etc.). If no candidate wins a majority, the candidate with the fewest votes is knocked out. Their votes are then distributed to whoever their supporters ranked second. This gets rid of the so-called spoiler effect. You can vote for your dream candidate, safe in the knowledge that you won’t be letting in the nightmare candidate by doing so.

There is nothing inherently liberal or conservative about RCV. This year, for example, Democrats used it in five states, and Republicans used it in three (Indiana, Utah and Virginia). In fact, the late Senator John McCain expressed his support for RCV (then more commonly known as instant runoff voting, or IRV) back in 2002.

From the other side of the aisle, there’s this:
“Every leftist in this country should join in the fight for this critical electoral reform,” Linda Thompson and Steve Bloom stated in the January‑February edition of Against the Current: A Socialist Journal.

Socialists for and against RCV

It is easy to see why some people towards the collectivist end of the political spectrum would find RCV appealing. Using RCV in primaries could help the Democratic Socialists of America (DSA) consolidate and expand its influence within the Democratic party. For example, State Representative Mike Connolly of Cambridge (Twitter handle: “proud progressive Democrat and DSA member”) supports the measure. Similarly, the socialist group Our Revolution Massachusetts (whose members and endorsed candidates include Representative Connolly) is for it.

But just as RCV has supporters on both sides, it also has detractors. As one contributor to the New York City Democratic Socialists blog explained, “[with RCV] establishment candidates may be able to consolidate votes among themselves while more radical candidates who are less likely to ‘play nice’ remain more isolated.”

By encouraging candidates and parties to reach out beyond their base for second-preference votes, RCV tends to reward compromise and moderation in some circumstances. It can foster the politics of the mushy middle, rather than heightening Identitarian differences and hastening the revolution. For some socialists, this supposed tendency of RCV to promote positive campaigning and bridge-building is a problem rather than a solution.

Why do some libertarians and conservatives oppose RCV?

But RCV has vocal opponents on the non-collectivist side too. Some conservatives in Massachusetts are dead set against Question 2, including Jim Lyons, chair of the Massachusetts GOP. He is quoted in the New Boston Post as saying that RCV would “delegitimize our elections.”

That same article quotes Paul Craney of the pro-market Mass Fiscal Alliance as stating that RCV would “lead to more partisanship and extreme positions as elections become dominated by straw candidates and politicians focus more on rallying their base and less on representing their constituents.”

No conservative or libertarian should dismiss the opinions of these respected stalwarts lightly. But as a previous article of mine on ranked choice voting states, because RCV requires a majority of votes and replicates a series of run-offs, it harkens back to the voting system established in the Massachusetts Constitution. That Constitution was ratified in 1783, and only jettisoned in 1855. It’s hard to see how going back to the model that was designed by none other than John Adams and in use between the end of Revolutionary War and the eve of the Civil War could make our elections less legitimate.

As for extremism, it is true that in some races RCV could encourage polarization within both major parties. After all, the niche candidate whose goal in the party primary is to maximize the alt-Left/alt-Right vote would be able to run without fear of letting in the centrist candidate. But to win more than protest votes, a candidate needs to appeal to a wider and less doctrinaire audience.

Another criticism from the non-collectivist end of the spectrum comes from Jason Sorens, writing for the free-market Cato Institute. Sorens argues that plurality voting endows small parties with “blackmail power” and pushes the two big parties to cater to them on pain of facing spoiler candidates. RCV, according to Sorens, deprives small parties of this “blackmail power.”

That claim did not age well. Surely the experience of the past six months has put rest to the notion that the Democrats and Republicans are “decent” on either civil liberties or economic freedom. As voters nationwide will attest, but perhaps particularly those in Massachusetts, both major parties are trampling on basic rights. Whether it’s the right to assemble to petition or to worship, the right to pursue a livelihood, or—as MassLandlords members are painfully aware—the right of access to the courts in order to try to make manifest the right to repossess your own property, Republicans and Democrats do not care.

Almost overnight, a public-health emergency became a pretext for a power grab, with politicians deciding which businesses could stay open (Walmart), which had to close (the corner store); where we could gamble (MGM casino) and where we couldn’t (Bit Bar arcade); where we could assemble (protests, so long as they were not of the anti-lockdown variety), and where we could not (churches/temples/mosques). For those of us who value liberty, these have been the times that try our souls.

But expressing our frustration at the polls is not an option. If liberty-minded candidates jumped into any Democrat-versus-Republican legislative races—a rarity in Massachusetts in the best of times—the split in the right-of-center vote would likely hand victory to the Democrat. So, contrary to Sorens’ argument, libertarian-inclined voters wield no blackmail power, or any other kind of power for that matter.

Libertarians and conservatives for RCV

The 2020 platform of the Libertarian party declares: “We support election systems that are more representative of the electorate at the federal, state and local levels...we oppose laws that effectively exclude alternative candidates and parties, deny ballot access, gerrymander districts, or deny the voters their right to consider all legitimate alternatives.”

The party employed RCV to nominate its 2020 presidential candidate. In fact, the Libertarian party’s support dates back to at least 2002 when the party endorsed the system, though, as stated earlier, it was more commonly known as instant runoff voting (IRV) at that time.

Despite its unpopularity among the Republicans of Maine, support for RCV in no sense represents a break from conservative principles. As mentioned above, one famous Republican supporter of RCV was the late Senator John McCain. Among those using RCV this year was the Utah GOP, hardly a nest of Marxists. And in response to a question from a libertarian caller, conservative writer and commentator Ben Shapiro voiced his support for RCV.

Attitudes toward RCV cut across, not between, political parties. Whereas plurality voting favors a two-party system, RCV does not tilt in favor of any particular faction or ideology. But it is fair to say that the system does weigh in favor of one group: It has a pronounced bias in favor of those voters who want to exercise freedom of choice.