Blog » The Upside to Landlord’s House Burning Down

April 5, 2013 is the night David and Dawna Foote became temporarily homeless. The cause of the fire remains unknown. At 6:15pm, according to MassLive, they noticed their barn was on fire. Five communities responded, but the house could not be saved. 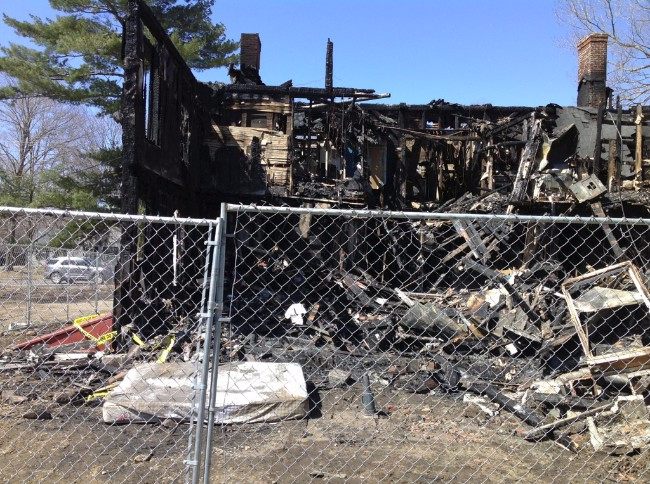 The cause of the fire was believed to be squirrels chewing on an electrical wire. High winds spelled doom for the barn and home.

“I was in a total tail spin,” David told MassLandlords.

With strong support from the community, the Footes soon decided to rebuild. “In retrospect it was a cool year. We rebuilt our four-family from the ground up.” Here is what David learned that other owners can benefit from.

In most towns, you would need an architect. Small towns work very differently. The Footes drew up their own plan and had their local building inspector approve it.

“That saved us $2,500 on the plans. It was money we didn’t need to spend, because I was a pretty good drawer,” David said.

The Footes rented a trailer on-site and lived there during the spring and summer while they drafted their plans.

By the time the plans were finished, it was well past the warm summer months. Framing was a quick process. But one thing the Footes didn’t consider was how interior sheetrock mudding requires warm interior temperatures.

“We did have to cut some holes in the subfloors,” David said. This was to help their portable gas heaters heat the interior. “If we had done this any other time of year we would not have.”

MassLandlords asked David if the building code he had to follow seemed to be good policy. (The international building codes are the starting point for any structure, and Massachusetts adds requirements. The IBC in combination with MA amendments govern what your house has to look like or do in certain respects.)

“Nothing was out of the realm of good ideas,” he said. David added, “The sprinkler thing is really bad for existing buildings.”

Sprinklers are Expensive Even for New Construction

For new construction with access to the studs, it cost the Footes $22,000 for their residential sprinkler system (2013). This was not required under MGL, so they tried to avoid it, but they were required by their building inspector to have sprinklers.

“This is literally keeping people from buying and rehabbing buildings. You’d never get your money back,” David said.
In the Foote’s case, there were things beyond the cost that didn’t make total sense to them. They were on a well, so the code required them to have a 400 gallon water tank with a circulator pump to pressurize the sprinklers.

“There’s one wire into the house. The first thing they do with a fire is cut the electric so the pump won’t work,” David said.
MassLandlords asked David, do you wish you had a sprinkler system in your old building?

David said, “It would have done its job. They don’t all go off. One goes off only.” Residential sprinklers are designed to let occupants escape, which the Footes thankfully were able to do.

David added, “In Southbridge, there’s a vacant building and a hair salon business in need of space. But she could never move in there, because with change of use, the whole building must be brought up to code.” The building would be too expensive to modernize, and so remains vacant.

You Can Act as your own General Contractor

To save money, the Footes decided to act as their own general contractor. This put a lot of responsibility on them to plan and coordinate measurements, purchasing, and schedules. 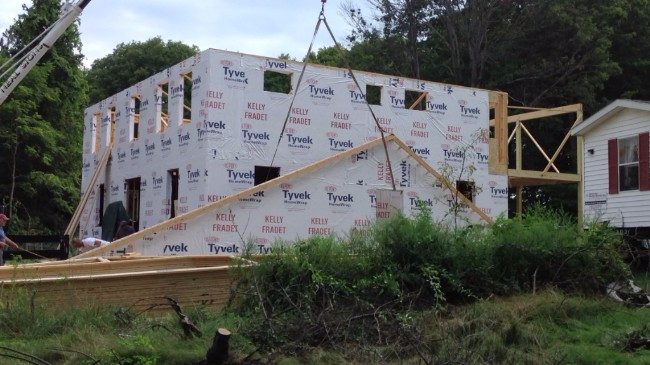 “A builder would have done stock everything,” he said. David described how they were able to select AZEK PVC wood for their trim and mouldings, even on the interior.

“If you scuff it with a boot it’ll clean off,” he said.

AZEK PVC mouldings come white and you don’t need to paint much of anything.

“When you router it you do need to paint the routered edge. The porous edge catches and shows more than the face.”

The Footes were able to find low-cost suppliers with trailers of it. “They didn’t have everything” but the Footes found enough to make their designs work. 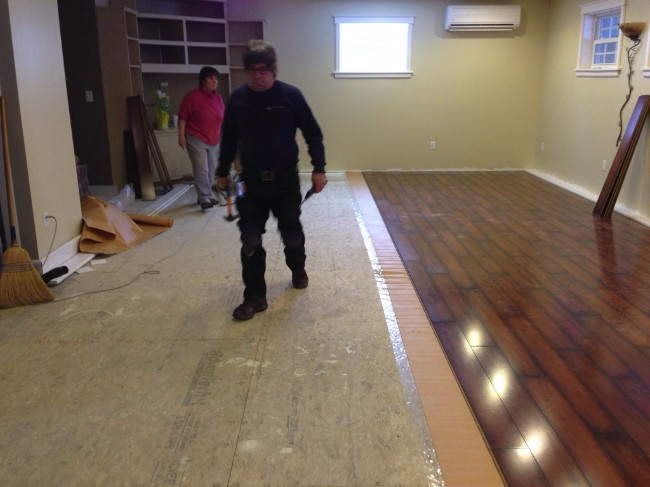 For a large modern building, sometimes the electrical service is not adequate. The Footes discovered this, and had new lines run to the property to serve their five meters (four apartments and a master). But more than just “modern” service, the Footes’ house plans were to have no natural gas or oil. They made their house 100% electric. They heat and cool with heat pumps.

When the Footes were reimagining how they wanted to heat their building, they asked about ductless mini-splits (or heat pumps).

“‘You’re rolling dice’,” David remembers one person saying. “Others said, ‘Don’t do it’.”

Heat pumps produce heat and air conditioning by using electrical power to circulate a working fluid between the interior and exterior. They can be extremely efficient. They can also be underpowered in old, leaky homes.

David’s plumber said, “You’ll be fine” and encouraged them to adopt this new technology with their new construction.

The Footes put a lot of time into finding the right brand and had them installed as their only heat source, along with plenty of insulation and caulking.

“It was -14 degrees last winter,” David said, “and we had no problem keeping the house warm.”

“We saved a ton of money. For two floors our highest bill was $240, heat and hot water,” he said.

“I wouldn’t put this in an old house,” David said. For electric heat to pay off, the house must be tight and sealed of air leaks and drafts. 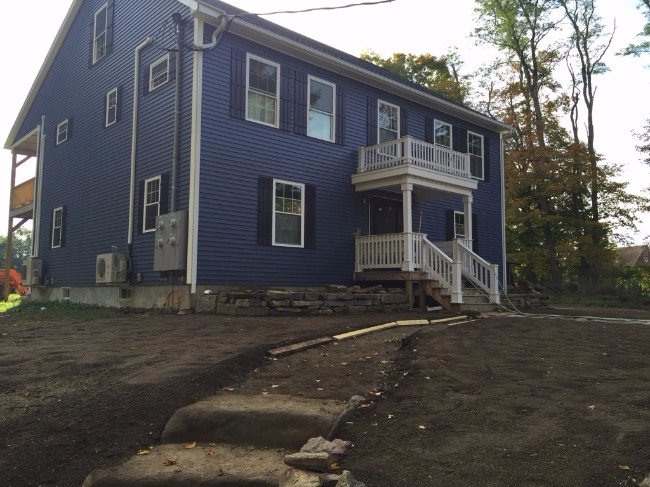 When we asked David if they had gone solar, he said, “We looked into it.” Their new roof pitch was 8/12 and David said, “one of the sides is a massive roof.”

But surprisingly, Solar City told the Footes that they didn’t use enough electricity! Under the Solar City leasing agreement at the time (MassLandlords has not verified if this is still true) only one meter was allowed per panel. In a four-unit with five meters, they would have to choose just one.

“We could buy but the payback was maybe 22 years. Panels don’t last that long,” David said.

David is now a wealth of knowledge about building houses, and shared much more with MassLandlords than we were able to fit into this article. Find him at MassLandlords.net/SWCLA in Sturbridge on the first Monday of every month.

And in Case you have a Fire Yourself

Share the FEMA fire recover pamphlet with your tenants. It gives some concrete “next steps” to help them recover after a fire disaster, something we never think will happen to us, but in fact is all too common.