LED bulbs save energy, but they're expensive right? Well, hold that thought. 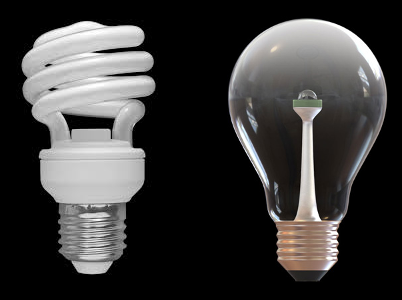 Through MassSave, the public (including landlords) can obtain Cree brand LED light bulbs, shower heads, and power strips at discounts to list prices. Their bulbs are rated to 25,000 hours, which means roughly three years of continuous operation.

The key factor with LED's is wattage. LED's use so little energy (8.5 to 11 W) that they outperform even CFL's over a three year period. This is true even though you have to buy more expensive bulbs. (A spreadsheet showing the math is linked at the end of this article.)

Switching from CFL's to LED's

According to energy.gov and our analysis, those of us currently using CFL's should expect to save a third of our lighting costs by switching to LED's. Just be sure to pay attention to the purchase price, wattage, and rated life. The bulbs linked here will save you money, but some LED's will not. We are in a transition period with LED technology.

Suppose you're lighting a common area with 6 CFL's day and night. Replacing them all with the Cree LED's will save you $72 over the next three years. Replacing them with the Philips LED's will save you and $276. These savings are big enough that you can afford a special trip just to change the bulbs. Or you can have a handyman change them as they visit your properties for other reasons.

LED's have many other advantages. They start immediately without warm-up time, so they can be used with motion sensors. They are more durable to cold and impact damage. They are less toxic. Unlike CFL's, they don't contain mercury. (You always carry your used CFL's to the dump, right? They can't be thrown in the trash.)

Shocking! The LED bulbs mentioned above are so much better, it's cheaper to throw away your brand new CFL's and install LED's instead. Don't even use your existing inventory. Just send it all to the dump.

One final thought: please don't be that landlord who has all their LED's stolen by a classless tenant. If you are concerned that these expensive bulbs will be taken, install them only in hard-to-access fixtures.

Switching from Incandescents to LED's

Incandescent bulbs have legitimate uses for aesthetic reasons, including the warmth of the light or the appearance of the bulb. But the best LED bulbs now have warmer light than the best CFL's (according to wikipedia), so if you purchase wisely you won't be bathed in cold bluish light.

Wikipedia seems to advise caution around red surfaces, where lighting effects could make your property look bad, and also out-of-doors, where insects could be attracted in droves. You might consider buying a single bulb for testing purposes, or opening only one package and being prepared to return the rest. Pay attention to the color spectrum. If you want an incandescent look, you want a "soft white" LED, or "0 - 2,700K" spectrum.

If you aren't using incandescents for aesthetic reasons, run -- don't walk -- to the nearest LED bulb seller. Each incandescent bulb you replace will turn into a crisp $20 bill. (Metaphorically speaking.)

You can see the actual products we compared and the math behind our ROI calculations in this Excel spreadsheet:

To access this benefit, you must be logged-in and a member in good standing