Found Among the Papers of the Late Sandra Katz, a tale of triple damages from good faith errors with a Massachusetts security deposit.

In the bosom of downtown, just off Main Street, a dead-end road leads to a vacant lot, encircled by chain link, and known to locals as SECURITY DEPOSIT HOLLOW. A forlorn, wind-whipped accumulation of weeds is the only life in the place. The neighbors say the lot was the site of multiple legal disasters in decades past, the litigation from which remains ongoing. Some say there is a defect in the title. Others say there once was lead paint. It matters little; no one visits the property for any reason other than to stare. They leave with nothing, for nothing is all the lot has to offer.

The visitors come because by far, the most common curse ascribed to the place is the ghost known to the neighbors as the Headless Landlord of Security Deposit Hollow.

We have it on good authority that the lot once held a house, a house like many other houses, that many felt they would be proud to call home, if only for a short time.

The House at the End of the Lane

In this place lived and worked an on-site manager by the name of Endicott Pane, who took pride in his ability to keep a property ship-shape and in compliance with the spirit of laws federal, state and local. His buoyant spirit in a job well done was tempered only by an occasional uneasiness that swirled around his property, like the autumn leaves the old-growth trees divested in heaps onto the cobbled lanes.

Endicott Pane’s job was a simple one, the house being tidy and modest, the lot being small and without much defect. Still, he stayed busy, dutifully keeping the lot free of debris, collecting the old branches and blown-in trash, and keeping the wooden porch in good repair, the trim in fresh paint and the small gardens seasonally bountiful.

When the Smith family passed Pane’s screen and took up residence in the home, Endicott was thrilled to have new tenants to please. He collected their security deposit and promptly placed it in an account at the First Bank of New Hampshire, as the state line stood very near the neighborhood and offered the convenience of avoiding a trip across town to the Massachusetts Bank and Trust branch.

All was well for 30 days, until one crisp evening in early October. Endicott was raking the leaves, their hues of red, golden yellow and brown mixing into an autumnal mosaic. The cool air was redolent with wood smoke, and on the porch, four rotund pumpkins sat, awaiting a carving party the Smiths were to host the next week.

At first he thought it was the wind.

“Endicott...!” This time it came clearly across the dry lawn. A squirrel stopped in its tracks, then darted beneath the porch. Endicott froze, letting the rake fall to the ground as the visage of a man in a tattered suit materialized before him. He hovered above the ground and moved swiftly towards Endicott Pane. Endicott could barely breathe. To his horror, he saw that above the man’s starched, discolored collar, there was nothing but black mist. No hat was worn, as no head existed to bear it.

“You have befouled the laws governing security deposits!” the specter moaned, the sound materializing despite the lack of vocal chords to form it, as if from the mist itself. Endicott Pane regained his senses and began to step backwards, towards the house. The ghost advanced quickly, skimming above the leaves. Not a single one so much as rustled in his ghastly wake.

Endicott changed direction. He turned and ran through the break in the stone gate, the moan of the Headless Landlord following close behind. He leapt over the curb and sprinted across the street, dashing through the neighbor’s yards so quickly he thought his heart would burst. He whirled left and right looking for shelter and finding space behind a neighbor’s shed, quickly ducked behind it and waited. He heard nothing. A minute passed, then five, and finally Endicott peered around the back wall. He saw no ghost. The sun was setting and a pale golden glow lit the yard and the street beyond. He could see the front door of his own residence, welcoming beyond the pumpkins.

“Perhaps I am imagining things,” he said to himself, carefully making his way back home. And in time, he managed to convince himself that was true.

A year passed and Endicott had well forgotten all about his troubles. The garden bloomed with success; the rain flowed down clean gutters. And the next September, the Smiths announced their intention to remain in the home another year. Endicott was once again thrilled, as they were good tenants who kept to themselves and were always on time with the rent. He oversaw the lease renewal with a practiced eye and conducted a thorough inspection of the property, writing a new conditions statement. There were no surprises; the property was well-maintained and the Smiths were careful renters.

That night, as Endicott pulled up his blankets and prepared to go to sleep, he was startled by the sound of a cat screeching beneath his window. He sat up and gasped audibly: the Headless Landlord once again appeared. The same ghastly void remained above his neck. The same tattered suit hung from his shoulders. The scuffed shoes hovered just above the floorboards.

“En-di-cott!” he wailed, the sound filling the room, chilling the frightened landlord to the bone. “Endicott, where is my statement?”

“St-statement?” Endicott stammered, a cold dread filling him as he realized the error of his ways. He suddenly remembered an interest statement must be provided annually for the security deposit. He had overlooked it as the banks paid so little these days, no one was looking for their nickel of interest. But the Headless Landlord had not. He had lost his shirt once in a tenant dispute that resulted in triple damages and, shortly after, lost his head when it all became too much. Some say he lost his head by his own hand. Others maintain it was due to a rotted beam on another property. The truth was lost over the years, but the result was here, before Endicott, making his sin known.

“Endicott, may triple damages be the WORST you know!” the ghoul screamed, before whipping through the room so violently that a heavy portrait fell from the wall, bashing Endicott in the head, cutting him and creating quite a bruise. The Headless Landlord hovered above his head, reaching down for him, and all Endicott could do was wait, wincing for what was certain to be a terrible end. He fainted.

When he woke up the next morning, sunlight filling the room, the only evidence Endicott had of the prior night’s terror was the broken picture frame, blood on the pillowcase and a monstrous headache. The grim specter was gone.

For the next year, all was well. Endicott had nearly forgotten he had ever taken a security deposit. The yard was spotless, the porch lattice pristine. Then, the next summer, Mrs. Smith was offered a professorship at Wesleyan in Connecticut, and the family announced they would not be renewing the lease. When the end of September came, Endicott conducted his inspection (flawless), and returned the security deposit. He gave the Smiths a glowing recommendation and began to prepare the property for the next tenants. No one mentioned the interest.

On Halloween night, after the last trick or treater had disappeared down the road and the jack o’lanterns had been blown out, Endicott turned the lock in the door and prepared to sit down and read a book.

Just as he was about to enter the den, the door blew open, dead leaves scuttling across the floor. The jack o’lanterns burned brightly again. The street lamps went out. Then the house lights went out. Fire burst out from the pumpkins on the porch. The radio began playing static.

“No!” Endicott screamed when he saw the arm of the suit reaching out through the darkness. “No!”

“Thirteen cents you owe!” came the disembodied voice, and that was the last Endicott knew.

The neighbors noticed the open door the next day and the charred pumpkins on the burnt porch and grew worried. They came to investigate, but found in the foyer only a pile of clothes, the flannel shirt dropped atop the faded jeans, and a new tenancy agreement crumpled beside them.

And no one could find Endicott. Eventually, the city absorbed the property for owed back taxes, and, following a severe hurricane, had the place razed. There were whispers, of course, but no one could prove anything...and the lot never sold. It stands today, a shell of its former quaintness, for the want of 13 cents.

Found in the handwriting of Ms. Katz:

The preceding tale is given almost in the precise words in which I heard it related at City Hall. S.K. 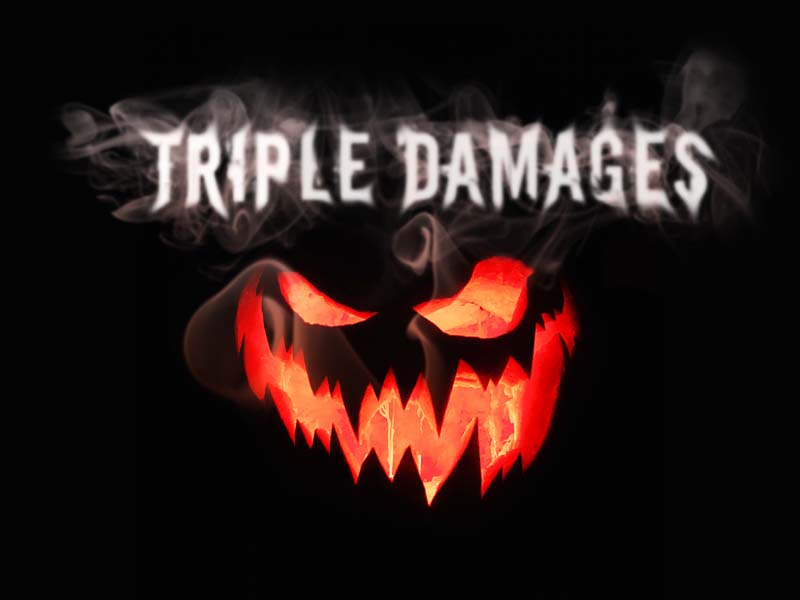 Think this story is scary? Forgetting any of the rules surrounding your tenant’s security deposit could cost you dearly. Image License: Unsplash

Our complete guide will keep you safely away from triple damages.

One Response to The Legend of Security Deposit Hollow