The Horror of Curbside Evictions? Not in Massachusetts - MassLandlords.net

Blog » The Horror of Curbside Evictions? Not in Massachusetts

Any landlord in Massachusetts is probably somewhat familiar with its eviction laws. The state is clear about what’s considered lawful when it comes to handling an evicted tenant’s belongings: Even if they leave things behind, you may not simply put their possessions on the sidewalk (or throw them away, or donate them to a thrift store). 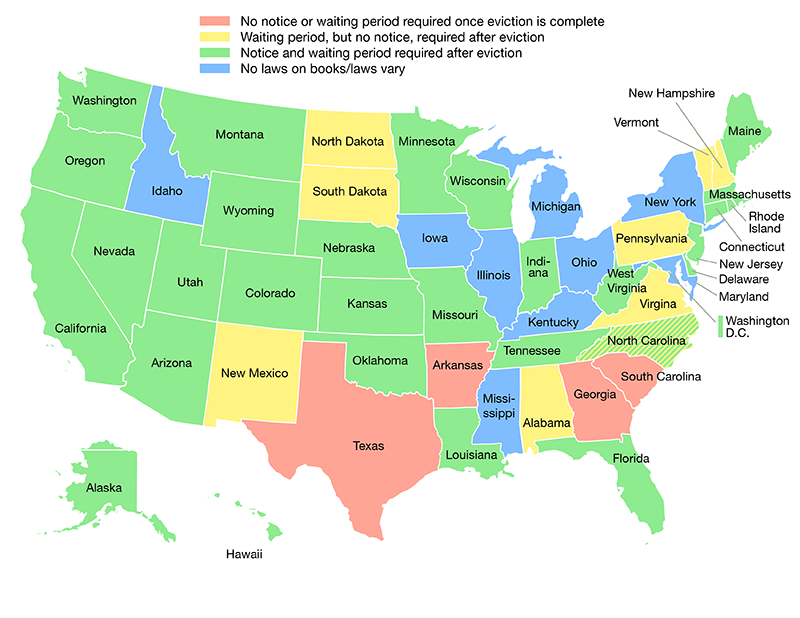 Tenants concerned about losing their possessions after an eviction should know that most states, including Massachusetts, do not allow for “curbside evictions.”

Known as the “move and store” law, Massachusetts requires landlords to transport and safely store a former tenant’s belongings for up to six months.

With that in mind, this article, from apartments.com, came as a surprise to MassLandlords staff. The article that took for granted that a landlord could, in fact, simply jettison their former tenants’ belongings after an eviction.

So we did a little digging. Is Massachusetts alone with its laws about tenant belongings? Is it commonly allowed for landlords to throw abandoned possessions onto the sidewalk?

The answer is no…but sometimes yes.

States where immediate disposal of property is allowed after an eviction

Five states allow some form of immediate disposal of tenant belongings after an eviction, though in these states, the laws may vary from county to county.

For instance, in Arkansas, a landlord is able to immediately dispose of any belongings that are left behind after a tenant moves out, with no waiting period.

In Georgia, if a landlord wins an eviction case against their tenant, any possessions left behind are considered abandoned and the landlord is not required to store them.

Maryland’s laws appear to vary depending on where you live: Baltimore allows for immediate removal of belongings. The attorney general’s site seems to back this up, stating that, “On the date of an eviction, the sheriff will come to the rental unit to order the tenant and everyone inside to leave. The landlord or the landlord’s employees can then remove all property from the unit and put it on the public right-of-way while the sheriff supervises. Once the property is moved from the unit, it is the tenant’s responsibility.” However, other sites advise tenants to refer to their local rules and regulations for eviction matters.

In Texas, it gets a bit murky because the sheriff typically takes over the responsibility of removing possessions. The sheriff isn’t allowed to block the sidewalk or leave items out in the rain, but otherwise, not much seems to be stipulated.

“Before the constable comes to remove you and your belongings, they must give at least 24 hours’ notice and post the notice on your front door. Your property can be placed outside of the unit. Your landlord is not required to store it,” states an article on Texas Law Help.

In South Carolina, immediate disposal is allowed, as long as the eviction notice states it can be done. After 48 hours outside, the municipality reserves the right to remove it.

Other states: property must be held, but no notice is necessary

Some states require landlords to hold onto former tenants’ property for a certain length of time, but don’t require further notice. These times vary from three days (New Mexico) to 28 (North Dakota, if items are worth less than $2,500).

North Carolina does not appear to require that landlords give notice when the items left behind are worth less than $500. If the abandoned items are worth more than that, landlords must give notice and wait 7 days.

Some states’ laws unclear when it comes to abandoned belongings

Ten states have laws that are either unclear or vary by region within the state. For example:

New York seems to allow the landlord to remove abandoned property under the supervision of a marshal. The law, at least for New York City, states that the landlord may store belongings in a warehouse, but also says that under certain circumstances, the warehouse may sell the belongings if the storage fees are not paid. A length of time is not specified. Other cities and towns may have different laws.

Illinois appears to defer to local regulations. For example, in Chicago, the waiting period is seven days.

In Idaho, the sheriff removes anything that isn’t trash and tries to contact the tenant.

Most states: notice and storage both required

Thirty states require a landlord to give some kind of notice to their tenant before disposing of or selling off abandoned property belonging to their former tenants. Some states, like Massachusetts, spell out exactly what is required.

Other states have laws that are a bit harder to parse. For instance, Rhode Island law says landlords must store abandoned property for a “reasonable length” of time, but does not appear to define that time period.

To see all the states that require some form of notice and waiting period from the landlord, please refer to the map image in this article.

There are times when Massachusetts seems to have very strict rules for landlords. And it’s true that six months to store property is longer than anything we were able to find on the books in other states. However, contrary to popular belief, when it comes to dumping tenants’ possessions on the curb to be picked over by dumpster divers, the few states that allow that are in the definite minority. Even in the states that have unclear rules, the majority seem to have local ordinances that prevent landlords from creating a free-for-all on the sidewalk with tenants’ possessions.