Blog » Should I Use Rock Salt or Calcium Chloride? An Overview of Ice Removal

Winter is coming and landlords of the north should be thinking about stocking up on salt before prices rise. But should we buy rock salt or calcium chloride? Are there other ways to prevent ice build-up? 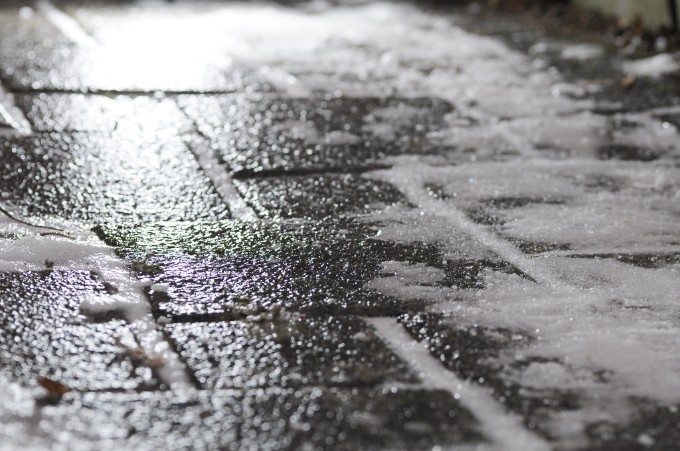 Why Do We Need to Remove Snow and Ice?

In some parts of the world, like certain Swiss villages, streets are allowed to pile up with white snow, sometimes four feet thick. It’s compacted hard so you can walk or ski over it. Anyone with a vehicle uses chains on their tires. Wheelchairs can be equipped with wide tires (not ideal, but it works). The ground is always clean looking and passable.

Unfortunately for us in New England, snow and freezing temperatures are not consistent enough to allow a uniform layer of snow pack to develop. We get a series of freeze-thaw cycles that eventually result in a crust of lethal ice on every surface. Our climate requires more or less constant attention.

What is Rock Salt?

Rock Salt is known to chemists as sodium chloride. Sodium and chlorine are both elements in the periodic table, and they can stick together. Ordinary people call this stuff “table salt” and eat at least a little every day. Some people call it “halite” or “common salt”.

Rock salt is produced by either digging in mines or evaporating sea water. In 2010 the world produced 270 million tons of it.

When combined with water, rock salt solution has a freezing point of 14 °F, much lower than water without salt. Roads can be sprayed with a briny salt solution before snowfall to keep the snow from sticking, or they can be salted after snow removal to keep ice from forming in the next freeze-thaw cycle.

What are the Pros and Cons of Rock Salt?

Pros: Rock salt is cheap. You can buy just a little 25 lb bag of it for 28 cents a pound, and larger quantities for even less.

Cons: Rock salt doesn’t work when temperatures drop below 14 °F. Rock salt also eats away at surfaces like wood and concrete. The way it does this is different for each surface. It pulls moisture out of the wood and facilitates cracking. It reacts chemically with Portland cement to leach out certain compounds needed for strength.

According to legend, rock salt was the way Rome finally destroyed Carthage. They sprinkled enough rock salt on the ground to make sure Carthage would never have agriculture again. (Note that there is no archaeological evidence for this.) But mind your lawns and landscaping! Don’t shovel salted snow on places you want plants to grow. You may not destroy Carthage, but if you concentrate an entire driveway’s worth, you can injure or kill a bush or a tree.

What is Calcium Chloride?

Calcium chloride has no common name other than what the chemists call it: calcium chloride. Sometimes it’s sold as “ice melt” (always read the label). It does not occur in large quantities on its own, but can be produced from a chemistry process combining brine water and limestone.

Worldwide production is under 5 million tons.

When combined with water, calcium chloride can keep solutions from freezing as low as -62 °F. Also, when solid “prills” or pellets come in contact with water, they release heat.

If you have a dirt road or driveway, spraying it with a solution of calcium chloride can keep it from eroding.

What are the Pros and Cons of Calcium Chloride?

Pros: Calcium chloride works down to extremely low temperatures and isn’t nearly as bad for plants as rock salt.

Cons: In 25 lb quantities, calcium chloride is more than twice as expensive as rock salt. It still eats away at wood and concrete by leaching out moisture and certain necessary chemicals.

What about Magnesium Chloride?

Magnesium chloride is another derivative of sea water, but like calcium chloride, does not exist on its own without chemical processing.

Magnesium chloride works down to -15 F.

What are the Pros and Cons of Magnesium Chloride?

Pros: In the lab, magnesium chloride leaches concrete at half the rate of calcium chloride. Be careful! Lab tests are only models of the real world, and Peters Chemical has a great article debunking Magnesium Chloride in every possible way compared to Calcium Chloride, including concrete leaching in cold temperatures.

Why Can’t I Spray My Properties with De-Icing Fluid from the Airport?

Airplane de-icing fluid is known to chemists as either propylene glycol or ethylene glycol. It works immediately and, in large quantities, completely removes ice down to temperatures below -67 °F.

Unfortunately, glycol solutions can be eaten by bacteria and algae, leading to intense blooms of microorganisms that use up all the oxygen and kill all other aquatic life. Use of de-icing fluids is therefore heavily regulated and requires permits. Also, ethylene glycol in particular is both sweet-tasting and fatally toxic. This makes it very dangerous to have puddles of it anywhere small people or any animal will be playing.

So that’s why we don’t de-ice our houses like jets.

When it comes to Ice Removal, an Ounce of Prevention is Worth a Pound of Cure

These salt products can be used on top of existing ice. Combined with chippers and scrapers, you can soon have your sidewalks and walkways passable. But did you know you can lay down salt before a storm? This can prevent ice from adhering to rough surfaces and greatly reduce the work needed later.

The best approach is to remember that melting snow leads to ice build-up. Try to prevent snow melting onto walkways! Be mindful of where you throw snow into piles, as these areas will be constant sources of new ice. Install gutters, or if you have persistent drips, place a wide-mouth trash barrel under the drip to catch water and redirect it away from walkways. (If you set out a trash barrel, make sure it’s high enough and weighted down to prevent children from getting into it, and empty it regularly).

So those are the reasons why rock salt is common and calcium chloride is the premium alternative. Did you like this article? Email feedback to info@masslandlords.net.

Don't Be Left Out in the Cold

Members can ask experienced landlords for advice about snow and ice removal, bulk purchases of salt and sand, and anything else on your mind using our email and Facebook message boards.

10 Responses to Should I Use Rock Salt or Calcium Chloride? An Overview of Ice Removal