On March 3 WBUR reported on the final report issued by the Senate Special Commission on Housing, and failed to identify the one bipartisan idea in the report: Insurance Against Homelessness, or the Landlord-Tenant Guarantee. 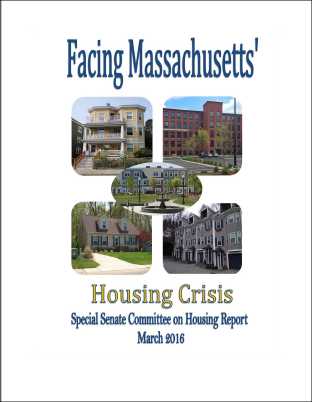 Instead, emphasis was placed on gentrification and millennial villages. Gentrification is viewed as a problem primarily by the political left, and millennial villages were the pet project of Barry Bluestone, of the Northeastern University’s Dukakis Center. Neither idea was a priority to the larger commission. In fact, Professor Bluestone delayed the closure of one commission meeting by soapboxing.

The outweighted impact of the left was discerned by WBUR’s Simón Rios, who referred to the Commission’s “housing crisis” in quotes, provoking the wrath of at least one left-wing commentator.

RetroPam wrote, “Why is the word 'crisis' being used in delegitimizing 'scare quotes?' We have allowed housing to become one of the purest laissez-faire markets that exist in this country and a market in which buyers and owners feel that they are truly entitled to a profit after the asset is sold.”

Although the report wording and attributions page implies that consensus was reached among all commission members, each recommendation reflects the work of a very narrow subgroup. Only the non-profits with the most grant money to spend on advocacy were able to participate in more than one subgroup. For instance, Rachel Heller at CHAPA sat on several as part of her job.  MassLandlords on the other hand has never paid anyone to work policy; we’ve been all-volunteer to date.

Some subgroups had no contrary opinion. One of them, for instance, advocates expanding the use of eminent domain to seize multifamilies and place them under nonprofit management. Clearly MassLandlords does not endorse this idea.

The commission process was so flawed MassLandlords can’t even endorse the wording of the one proposal we helped to write, Insurance Against Homelessness. The final wording reflects the way established nonprofits ran roughshod over valid landlord input. They even wrote themselves into the budget language:

“In coordination with other services being provided by current administering agencies in the regions, including Central Massachusetts Housing Alliance, HAPHousing, RCAP Solutions, and Metropolitan Boston Housing Partnership” [October 2015 draft].

What would they have said if we had written in “MassLandlords?” They would have laughed in our faces.

Unfortunately, self-aggrandizement was not their only sin. One commission member let it be known that they would prefer homelessness get worse under a Baker administration so that when the eventual Democrat governor was elected, their agency would receive more funding. This was truly evil.

These same advocates also failed to provide justification for their changes to the Seattle program, which we were seeking to copy wholesale. The only changes we want would be to address the fact of Massachusetts’ “right to shelter,” or other legitimate peculiarities of our state. Otherwise, we’d think it arrogant to tweak a working program before we’ve tried it.

The co-chairs of the commission surely recognized the outweighted impact of the left. Otherwise why were no labor unions involved? Broad reform will require consensus from the unions as well as the association of zoning boards of appeal. This will be no easy matter.

The best thing to come of the Commission is that MassLandlords is now acquainted with key players in the non-profit space, as well as key staff at the Department of Housing and Community Development. The more we learn about DHCD’s work, in particular, about Associate Director of Housing and Stabilization Rose Evans, the more impressed we are. We hope to conduct a pilot of meaning to landlords, tenants, and the commonwealth.

To learn more about Insurance Against Homelessness and the path the idea has taken, read about it here.