Blog » Will Ben Carson Slash Section 8? Can we Replace it with the Mincome or the EITC?

Much of the money spent by the federal and state government goes to social welfare, in particular, housing. HUD’s new Chief, Ben Carson, has stated his intent to slash Section 8. Have we won the war on poverty? Not really. But there may be an improvement the new administration can make. 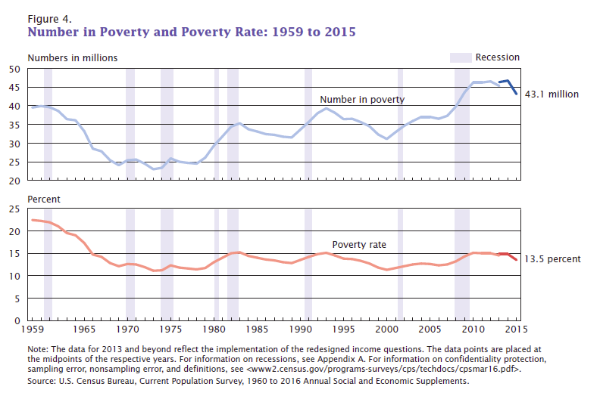 As the US Census graph shows, the only time we made a dent in poverty rates in the last 50 years was when we introduced Medicaid, Medicare, and more money for Section 8. The poverty rate hasn’t declined at all since then.
The Washington Post gives an excellent history, and shows the tremendous increase in welfare spending since the War on Poverty began. Unfortunately, spending has grown out of proportion to the benefit it has generated. Let’s ignore the other waste and focus just on Section 8.

Section 8, for all its detractors, produces net economic benefit for society, according to a May 2010 report by the Institute for Research on Poverty (University of Wisconsin, Madison).

The University of Wisconsin estimated that for every Section 8 dollar spent, society benefited between $1.09 and $1.42. This counts increased rent paid to landlords; increased eligibility for other public benefits with a net positive impact, like food stamps; increased scholastic performance of children; improved health; and reduced crime and substance abuse.

In fiscal 2014, the US allocated $18 billion of rent money to roughly 2 million households, or roughly $9,000 per household per year. Household benefits can vary widely based on their location.  Overall, Section 8 spending represented just 0.5% of total federal spending ($3.6 trillion) in 2014.

The list of subsidies and bureaucracies is absolutely staggering: Section 8, food stamps, social security, Medicare, Medicaid, WIC, supplemental security income, social security disability income, VASH, and MRVP are just some of the subsidies landlords will know about. We counted 90 separate programs totaling $2.3 trillion welfare dollars in 2013 spending. And that’s just federal.
Is this really the best we can do? 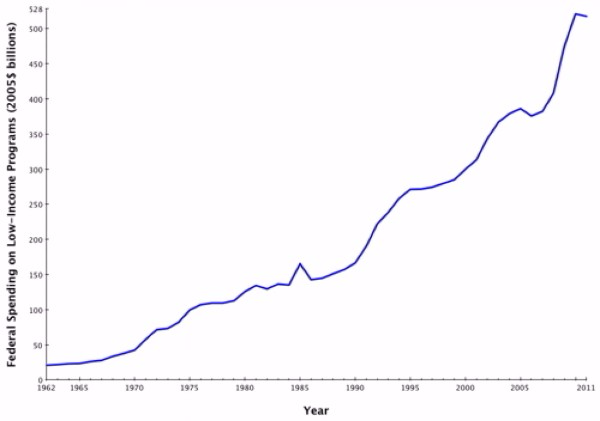 Washington Post - Federal Poverty Spending has increased 10x since the War on Poverty Began, while poverty rates have remained flat.

Last month, Finland started an experiment. They asked the question, “What if we took all the bureaucracy, shut it down, and just wrote everyone a check?” Two thousand Finns are now receiving $587 per month, tax-free, no strings attached. No apartment inspections. No means testing. No 90+ welfare programs.

Is the mincome a social paradise? If we adopted the mincome in the US, we could take our $2.3 trillion in federal welfare spending and write a check for every American for ~$600/mo.

MIT Technology Review warns that this would be a terrible idea. Remember that figure above, that the average Section 8 Household receives $10,000 per year in benefit? Altogether those families receive far more than $638 per month in benefit, and some of them are still poor. To switch to a mincome would be vastly more expensive and much less targeted.

Although mincome programs have been experimented with since the 1960’s, only one has permanent status today: Alaska’s Permanent Fund. The highest dividend payout was $2,072 in 2015, not enough to live on. It’s more a result of Alaska’s oil wealth than anything else.

The largest study ever done of an adequate mincome was in Canada, but sadly, program funding was cut before the final report could be written. The data lives in 1,800 unsorted record boxes in Manitoba. The only conclusive result is that hospitalization rates fell by 8.5% for mincome recipients. This is known because of separate tracking done by Canada’s health system.

So we know that the mincome would be much more expensive than our current targeted system, and that it reduces hospitalization rates, but we don’t know much else about it. Finland will tell us, if their mincome is enough to live on (it may be only 70% what is needed). It’s the kind of program a bureaucracy slasher could really get to like.

A competing idea that economists say is better than the mincome is the “Earned Income Tax Credit,” or EITC. This is already one of the 90 federal social welfare programs. In fact, it is the third largest, after Medicaid and Food Stamps.

In 2000, three-quarters of US economics agreed that the EITC should be expanded. The EITC lacks what are called “bright finish lines,” meaning it phases in and out smoothly.

This smoothness makes it much more likely that a recipient will want to work. They are better off working a little, because the EITC won’t fade fast enough to negate their effort. This is very different from Section 8, where if you make too much, suddenly you have to pay all your rent. This is the opposite of smooth, and creates a disincentive to work a little more. 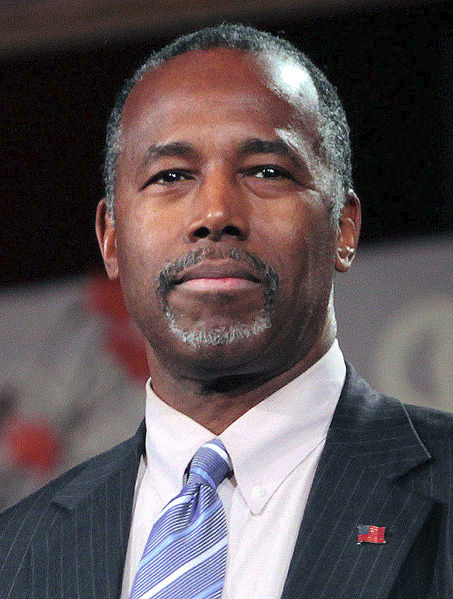 President Trump has appointed a declared budget-slasher, Ben Carson, to head HUD. Will he cut Section 8? Will Trump replace it or augment it with an expanded EITC? Or will Finland light the way forward to social paradise? Time will tell what happens. We’ll keep you posted.

One Response to Will Ben Carson Slash Section 8? Can we Replace it with the Mincome or the EITC?