“What would we do with a trillion dollars?” recalled MassLandlords Executive Director Doug Quattrochi. “It was just a dream. I had doodled in my notebook a Housing Bucket List: Gentle density allowing more people to live in affordable housing, transit options that made sense for everyone and were good for the environment, and actual change that kept landlords and tenants from getting caught up in eviction.

“But that was just a pipe dream,” Quattrochi said. “Where would we get a trillion dollars?”

Readers will recall the answer came in the form of a surprise grant to MassLandlords one year ago today, April 1, 2021, when the United Nations redirected $6 trillion in annual fossil fuel subsidies. Massachusetts was one of six jurisdictions selected for renovation. The changes have been nothing short of a dream come true.

Gentle Density = Green Space, Bodegas and T Stops for All

With enough money to both lobby for and fund major zoning changes, Boston has now found itself awash in high quality, affordable housing, along with more green space, public amenities and less stress for all.

Constructing safe triple-deckers and removing extraneous parking requirements has allowed more people to populate these beautiful neighborhoods. Extra T stops have let these residents commute to work without worrying about parking or car maintenance. And large bodegas, libraries and doggie daycares have meant that each neighborhood is now developing its own character and community…no food deserts here! 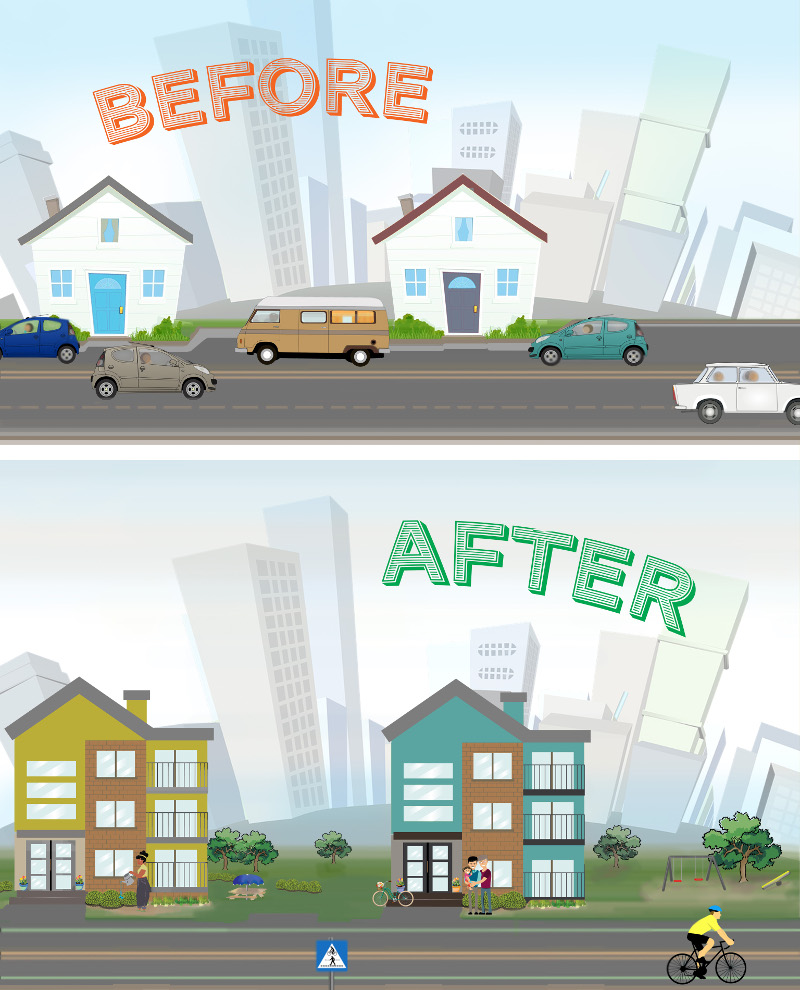 Before and after: A single-family zoned street with lots of wasted space drives up real estate prices and makes the neighborhood less walkable and useful, but creative zoning will allow for more public access and services. Derived 123rf Pixabay and CC by SA 4.0_MassLandlords Inc

Say Bye-way to the Highway, and Get on the Monorail!

It’s not just a Simpsons joke anymore! A new high-speed monorail gets you around cities like Boston and Worcester in a blink, freeing up the roads for first responders and helping the environment, all while shortening everyone’s commute.

And let’s not forget about those fabulous electric car charging stations (freely available in each neighborhood for those who still want to keep a car), bike lanes for recreation and commuting, and pedestrian lanes for residents to get around those highly walkable neighborhoods.

“It’s like a dream come true,” said local resident Anita Change. “Before, I was constantly worrying about my car passing emissions, where I was going to park it, and how I was ever going to afford my rent. Now, I sold my car, my landlord constructed more units on half the parking lot, and my rent went down. What’s not to love?”

The new I-128 monorail local stops at every highway exit for electric rideshare service to local neighborhoods and businesses. The express connects each commuter rail spoke for access in and out of the Hub.

The influx of funding for expanded housing, combined with zoning reform, has resulted in a substantial increase in entrepreneurship – some unforeseen.

Independent contractors are thriving. They’re being flooded with requests to build accessory dwelling units, duplexes and larger multi-family homes. The independent caregiving industry has also skyrocketed as more seniors are able to keep living in their own homes.

Other industries benefiting from the increase in affordable housing include tutors and language instructors, dog walkers, gardeners and landscape designers.

And with expansions of pedestrian byways and green innovations, several new jobs have emerged, such as Segway and e-bike taxis to help residents navigate car-restricted walkways; personal garden sitters to tend rooftop gardens while condo owners are away; algae pickers who cultivate and harvest the greenery growing on the walls and roofs of buildings; and urban farmers planting crops on the thousands of acres of formerly unused rooftops throughout the city.

Unfortunately, as with all commercial change, these new industrial shifts have created some losers. Nursing homes are experiencing an 80% decline in residents due to a sizable increase in smart, accessible and affordable housing. Some facilities may be forced to close, and their personnel transferred to home health aide companies.

Also taking a hit: housing court mediators, clerks and magistrates, who have suffered a precipitous decline in eviction filings, case dockets and clients. The situation looked so dire that one popular housing court judge was once spotted behind the counter of a local Starbucks struggling to illustrate a perfect heart shape with cappuccino foam.

“I knew I had to make a change when I was spending hours alone every afternoon in my courtroom watching Law and Order reruns on Netflix,” lamented Judge Nomar Dockette. “Evictions were steady for decades so I put in an infinity pool that my wife had her eye on. As the courts started closing, I had to do something to pay for it. Did you order the double latte?”

The legislature has since recalled all Housing Court staff for the newly created Housing Port, a welcoming committee speaking 7,151 languages. The Housing Port is expected to accommodate all 2 million war and climate refugees arriving in Massachusetts this year with capacity and housing to spare. 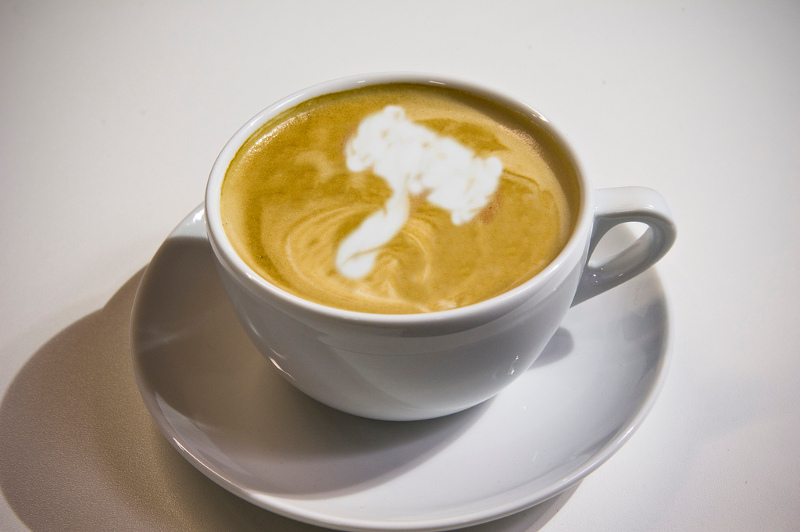 With the city’s eviction rate drastically reduced and rental housing offering high returns on investment, the landlord industry has exploded. Anyone owning even a small parcel of land is a potential landlord with new zoning allowing creative land use.

One woman who inherited her uncle’s commercial property, a long-time auto repair shop, converted it into a residential property with four 250-square-foot apartments. Each unit comes complete with bed platforms built on car lifts, which she kept in place to help keep construction costs down. Stacked tires serve as fashionable chairs while recalibrated air hoses keep the rentals cool in summer. The savings fueled her voluntary remediation of past oil spills.

Even the kids are getting involved. Twelve-year-old Shirley Kidding applied for and received a permit to rent out a one-room treehouse that she and her mother built in the backyard.

“My mom needed some help paying the bills,” said Kidding, “and we just did civics in school, so I was like, ‘Mom, I can be a landlord and help you out with money.’” The treehouse spent less than one day on the market before finding an occupant. Both sinks have three taps: hot, cold and maple syrup.

Putting the “You” in Utopia

And then Doug woke up. It was April Fool’s Day, and the entire thing had been a beautiful dream.

“We could still eliminate fossil fuel subsidies,” one of his staff offered. “Or, well…how else could we help landlords?”

Quattrochi set down his pencil and shoved aside his notebook. “Let’s start with pushing for zoning reform, even if we never see that trillion dollars. That’s so crazy it just might work.” 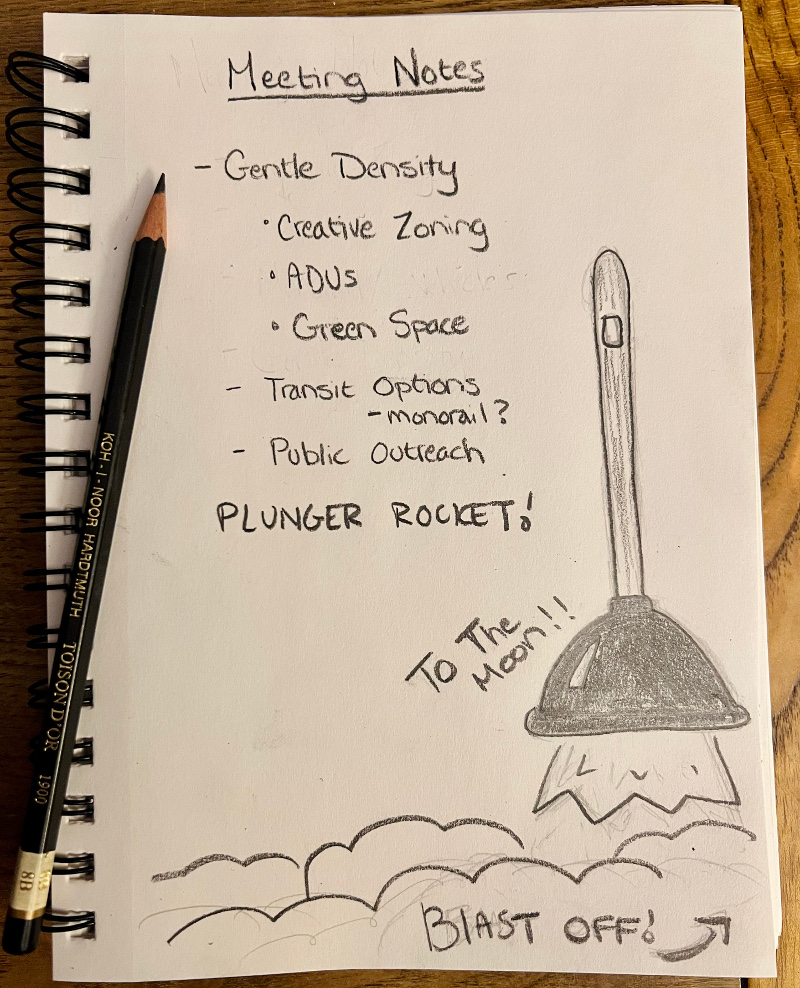 When all else fails, consider building a plunger rocket. Or just embrace creative zoning. License: Cc by SA 4.0_MassLandlords Inc

Read Past MassLandlords April Fools and Other Humorous Articles.

We Couldn't Have Done it Without You!

Thanks to all the members who have made our dream come true.