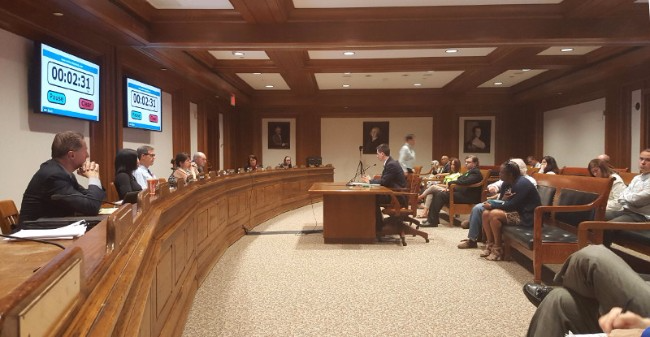 Doug Quattrochi testified at the State House hearing on Rent Escrow. Committee members Paul Tucker, William Brownsberger, Claire Cronin and others are visible at left, as well as audience members at right.

Rent escrow reform may be approaching after decades of advocacy. The September hearing made the case.

On Tuesday September 26, H.980 “An act relative to rent escrow” was heard in room B-2 of the State House on Beacon Hill. MassLandlords organized a cogent set of testimony in support.

The first testimony at the outset was from Representative Chris Walsh. Walsh described the bill’s origins and his recommendation that it ought to pass. Much testimony was then heard on other matters.

When escrow testimony was heard from the public, the first testimony was from a surprise landlord witness, Loquisa Burk (phonetic spelling). She testified to how she watched her mother deal with dishonest tenants. She asked that rent escrow be passed out of fairness to both sides.

Next, Skip Schloming, speaking on his own behalf as a landlord, provided his estimate of the loss to the Commonwealth due to lack of rent escrow. He estimated $500 million annually.

Doug Quattrochi, MassLandlords Executive Director, gave an overview of why the bill matters. He said, “For 20 years, landlords have been asking to fix Mass General Laws Chapter 239 Section 8A. The law is fundamentally good, but it has a loophole.”

The law rightly protects tenants who withhold rent to force repairs. The loophole results in some good tenants being evicted anyway. It also enables some dishonest tenants to play the “free rent trick.” Rent escrow would address both problems.

Peter Vickery, MassLandlords Legislative Affairs Counsel, gave the legal background on the bill. He addressed a potential objection to the bill by explaining the legal framework under which a jury trial can be denied if a renter fails to escrow.

MassLandlords member Tom Guertin spoke next. He had won a $25,000 judgment during an eviction in which habitability claims were raised. He was never paid.

A second MassLandlords member, An Dinh, described how her tenants played the free rent trick. With the money they saved on rent, they purchased a house. They went from An’s apartment, owing her money, to their brand-new home. They had the boldness to email An about it.

Ellen Schachter at the Massachusetts Law Reform Institute (MLRI) spoke next. “We have no problem with rent escrow,” she said. MLRI’s specific concerns were maintaining judicial discretion, making sure rent is escrowed prospectively only (not retroactively), and making sure that public housing could continue to operate under its special rules and restrictions.

Next a landlord panel from the Small Property Owners Association spoke. The panel consisted of Suzanne Bloore, Attorney Emil Ward, and Dawna Provost-Carrette.

Bloore, President of SPOA, said, “We are very encouraged by the bill that has been filed [H.980], but we think it could be better.” SPOA was there to support their bill, SB778, which had been filed by request, without negotiation with the tenants, and had less chance of passing.

Each testifier received three minutes to speak. Bloore did not use all her time, so Ward used the remainder of Bloore’s time to testify that he had studied 51 jurisdictions (50 states and Washington DC). He found only one case suggesting that rent escrow violated a constitution. It was a Maryland case that does not bear on Massachusetts.

Next Attorney Stuart Farkas was called and the timer was set to three minutes. Farkas quipped, “If I had known, I would have brought a panel." He got a good laugh.

Attorney Farkas took pride in his work, describing himself as a “substantial contributor” to H.980. This is true. He described how the bill meets essential legal requirements, including not obstructing access to justice, in no way preventing answer or counterclaim, and enshrining judicial discretion.

Farkas said, “Judicial discretion is necessary for a statute to live on.” H.980 was designed to permit full discretion on the amounts, purpose, and timing of rent escrow.

Attorney Patti Whiting, Harvard Legal Aid Bureau, argued that rent escrow is unnecessary. She said that many cases were settled on day one, and that half of all cases settled in the first ten. If allowed to speak after Whiting, MassLandlords would have offered contrary statistics. Whiting was the only clear opposition to H.980.

MassLandlords Member Sheryl Chase spoke. She concluded her testimony by saying that a judge in Western MA 18 months ago told her, in front of a room full of witnesses, that he would never order rent escrow.

Annette Duke at MLRI described Chase’s testimony as “hearsay.” Interestingly, she stopped short of saying H.980 ought not to pass. Duke’s input was instrumental in the creation of H.980, and ultimately with Schloming, Farkas, and Walsh made it the good bill it is.

Ester Wong, a landlord, was the final surprise witness. She said she lost $55K in her eviction and that it had been extended for 10 months due to lack of escrow.

Wong countered earlier testimony on other bills. Several tenant advocates had quoted a statistic that roughly 97% landlords have attorneys, but only 10% of tenants do, and that this was unfair. Wong rightly pointed out that landlords are required to have an attorney if they are a corporation. This makes the statistic misleading.

The room was uncomfortably warm with inadequate ventilation. Some had been told no water was allowed and so had brought none. Standing room was the only option for many. The rent escrow portion didn’t start until 3.5 hours into the hearing.

The commitment of landlords to drive in from all corners of the state, endure the hearing, and offer strong and compelling testimony speaks to the need for rent escrow. The relative lack of strong opposition offers further proof that H.980 ought to pass.