On September 8 and September 13, the public will hear proposed tougher lead paint regulations for the Commonwealth. The proposed regulations are well intentioned but fall short of good public policy. 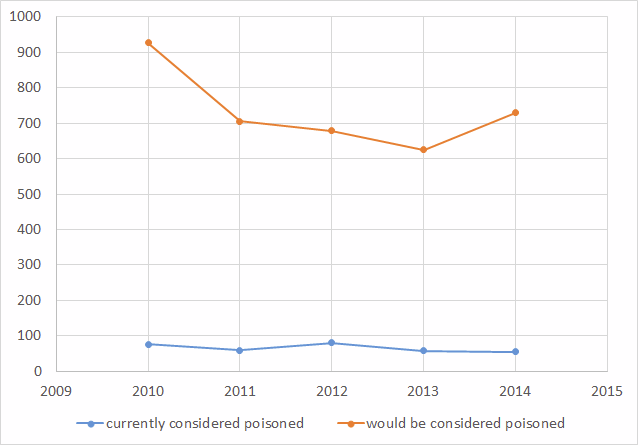 CDC data show that the average increase for Massachusetts children to be considered "poisoned" would be over 10x.

Before we criticize, let’s acknowledge what the proposed regulations do well. They rewrite some byzantine passages. They reduce regulation of encapsulants and certain surfaces. They focus the cleaning process on results over process. And they incorporate feedback from medical professionals, the CDC, and other states.

But overall, the new regulations reflect a major flaw, a lack of input prior to this point from the people who actually provide and maintain housing. The value of the deregulation is uncertain, but has been estimated at 40%. The cost of the tighter blood lead level, on the other hand, is quite certain, and increases caseload by an order of magnitude (over 10x). Under the proposed regulations, landlords and the Commonwealth more broadly will pay this increased cost, and there is not a whiff of legislation or budget to support the changes.

The Value of the Deregulation is Uncertain, but Estimated at 40%

The proposed regulations remove wall corners, exterior lattice, door and window casings (front-facing trim), staircase balusters (spindles), and chair rails from the list of surfaces that must be replaced or encapsulated. Now these can be “made intact.”

Keep in mind that the biggest cost of deleading still comes from the movable parts of windows and doors, which must be replaced. The bulk of deleading cost remains. Deleading jobs routinely fall between $1,000 and $10,000 per apartment, so there is tremendous variability and uncertainty in whether a landlord will see 40% savings.

The CDC publishes data on the number of children in Massachusetts and nationwide who fall into the various categories of “elevated blood lead levels.” In 2014 under current Massachusetts regulation, 55 children were deemed “poisoned” with blood lead levels above 25 µg/dL. If the proposed regulations were then in effect, a staggering 729 individuals would have been deemed “poisoned”. In that year, the increase would have been 13x.

The new regulations provide for an average 10x increase in the caseload for medical monitoring and intervention. The CDC has not changed its guideline that chelation therapy is only required for children with blood lead levels over 45 µg/dL. This creates a wide range of “lightly poisoned” cases that will all be treated the same. There is no indication that the proposed regulations have considered their budgetary or economic impact.

The Proposed Regulations Fail to Treat this as Society’s Problem

The owners who will pay for lead abatement are not responsible for painting with lead, cannot receive adequate tax credits to pay for the work, and yet face strict liability should a child become poisoned regardless of how it happened.

Consider a typical new owner who bought their first rental in 1977, the year before lead paint was banned, at age 27. They would now be age 65, retired, and unlikely to own that same building. Over two-thirds of Massachusetts housing stock was built before 1978, and based on the above retirement calculation and real estate markets, almost none of it is still owned by the person who painted with lead. Lead is a societal problem, and the cost must be spread around.

An average deleading quote for an apartment is $5,000. The Schedule LP deleading credit, which has not been increased since 1994, is only $1,500. If the lead credit had been indexed to the CPI, then by inflation alone it would now be worth $2,435, 60% higher. If it had kept pace with market forces, it would now be over three times what it once was. After accounting for the 40% reduction in deleading costs under the propose regulations, the Schedule LP credit will still be only half of what it should be.

Owners are responsible for the medical costs of lead poisoning regardless of whether the child was poisoned at their home. CLPPP reasons that “guilty until proven innocent” is their only tool for enforcement. What they fail to see is that the combination of harsh penalties with inadequate tax credits creates a dangerous incentive to delead illegally. An illegal deleading job creates more dust than a safe deleading job, and if the property is then sold, may be entirely untraceable.

Yes, let’s continue to drive blood lead down. But let’s understand the true costs, spread the cost fairly across society, and budget for it. We oppose the new regulations until the legislature can allocate funding for a substantially increased Schedule LP tax credit and/or a reworking of strict liability to draw in daycares, schools, and water authorities, all sources of lead poisoning. We’re standing by to provide more detailed feedback.

How to Weigh in on the New Regulations

Two hearings will be held.  The first hearing will be on Thursday September 8, 2016, at 10:00 a.m. at the Pioneer Valley Planning Council, 60 Congress Street, Springfield, MA. The second hearing will be on Tuesday September 13, 2016, at 9:30 a.m. in the Public Health Council Room, Second Floor, Department of Public Health, 250 Washington Street, Boston, MA.  Bring a written copy of your oral testimony, and/or email it to Reg.Testimony@state.ma.us.