As of August 15, 2018, an even 200 MassLandlords members had participated in our ongoing Policy Priorities Survey (14% of active members). The survey results now show a new highest priority. 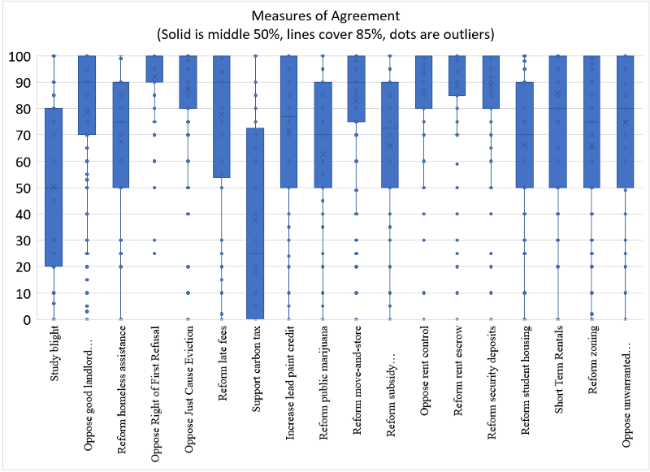 Members in good standing can log in to score specifically worded proposals on a scale of “0” (please don’t do this, it’s a terrible idea) to “100” (please do this immediately, don’t even grab your coat just go!). “50” is a score of complete indifference. Score voting provides a measure of “average importance” as well as a measure of consensus. Proposals with high average scores and narrow bands are revealed to be both important and widely agreed-upon.

In our last update, 85% of members had rated the rent escrow proposal a 70 or higher, making it the issue of greatest interest. Enacting mandatory rent escrow remains a high priority, high consensus item. Rent escrow has now been eclipsed by opposition to the so-called “Tenant Right of First Refusal.”

A tenant's right of first refusal would give renters first chance to purchase the property in which they reside, should it come up for sale. The right would be intended to prevent displacement by helping renters purchase buildings that would otherwise be sold for a non-rental use.

For instance, if a new owner wants to convert the building to condos or renovate it, they might want to empty the building. In the absence of a functioning housing market, elderly and low-income families could then be displaced far from that apartment. A right of first refusal is currently being proposed by Somerville and other advocates. Under their wording, the law would all but ensure that either the renter or a non-profit became the new owner of each rental property.

MassLandlords has written extensively on tenant right of first refusal, calling it “flawed as anti-displacement policy.” That is the mildest thing that can be said about it.  Most owners would probably agree that a tenant right of first refusal would be an abrogation of the right to dispose of property. The opposition is so strong and shared (85% of respondents rate the issue 75 or higher) that it now ranks first on our list of policy priorities.

This survey result stands in marked contrast to comments made to the Boston Globe by the new president of the Small Property Owners Association, “most landlords are likely to consult their tenants when selling a building.” Given the survey results, this seems unlikely to be true.

The wording of this survey question is, “Oppose state and municipal restrictions on transfer of multifamily deeds (example: the tenants or a nonprofit of their choosing would have right of first refusal on the building they occupy).”

Members remain divided on proposals to deal with blight and climate change.

The wording of the blight question changed in January 2018. It is now, “Craft a plan to tax boarded-up properties at a much higher rate than maintained properties.” This idea has no consensus. The average score is 50 (indifference), with large numbers of members in favor and opposed.

The wording of the climate change question hasn’t been changed since early 2017. An alternate proposal is being prepared. For now the wording is, “Work with the state to implement a carbon tax that would apply to tenants and landlords who use fossil fuels, subsidize zero-carbon energy sources, and invest in zero-carbon transportation infrastructure.” This idea has no consensus. The average score is 37 (opposition), with large numbers of members in favor and opposed. 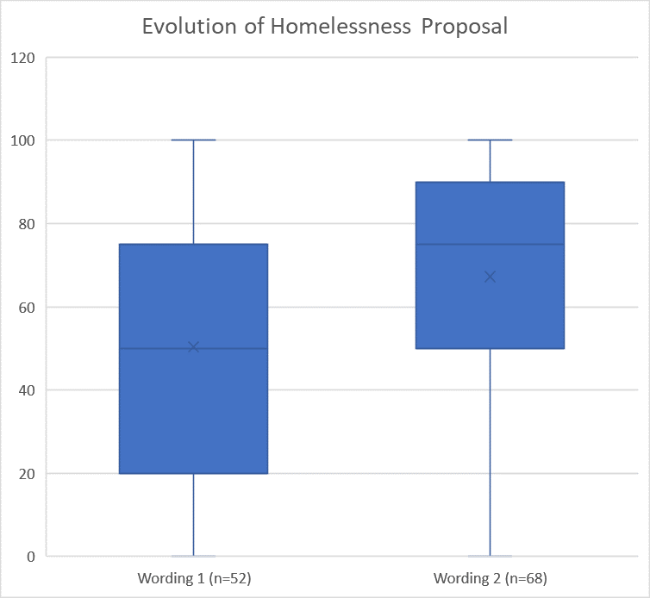 The wording of the homelessness proposal, which previously did not have organizational consensus, was changed in January 2018. The new wording has moved the organization away from indifference on the subject. Two-thirds of members now agree that the proposal should be adopted.

Prior to January 2018, the wording was, “Work with the state to develop Insurance Against Homelessness, where landlords receive a financial guarantee if they rent to someone in shelter” (Wording 1). The indifference registered by the survey contrasted with anecdotal experience, which showed strong support for the program once explained.

After January 2018, details were added to describe the program better. The new wording is, “Work with the state to develop Insurance Against Homelessness, where landlords receive $10,000 insurance if they rent to someone in shelter, a hotline to call for help, and a detailed plan for that tenant’s supportive services” (Wording 2). This now shows net support.

Iteration on wording shows that the same proposal, better explained, can produce better consensus. It is believed that iterations on core concepts (not just wording) will also lead to consensus on tougher problems like climate change. MassLandlords calls this “iterative direct democracy” and intends to iterate on all policy wording where consensus has not been reached.

Members can participate online at masslandlords.net/surveys/public-policy-priorities/