Tax credits for landlords. That is the latest proposal to make whole housing providers who have lost rental income from tenants who stopped paying rent this year, in part or full due to COVID-19 and the economic response. 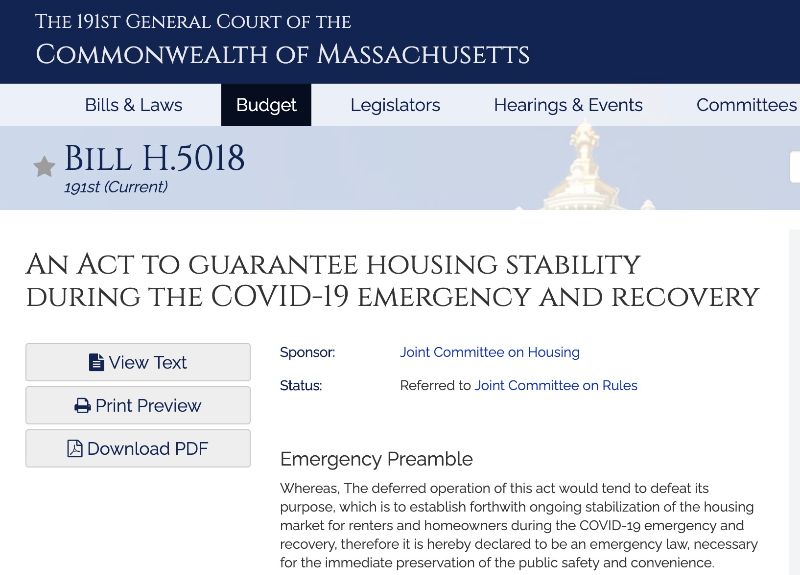 Bill 191 H.5018, pending in the state legislature, proposes tax credits to compensate landlords who have lost rental income due to COVID-19 and the response.

Under the provisions of bill 191 H.5018 S.2918, “An Act to guarantee housing stability during the COVID-19 emergency and recovery,” landlords who are owed back rent due to COVID-19 may opt to claim the income loss as part of their future tax returns and receive a credit, every year if necessary, until the owed amount has been paid.

MassLandlords has prepared talking points for landlords’ use in contacting their representatives and senators, and urging them to oppose this bill.

Since the state’s eviction moratorium went into effect as part of the State of Emergency last March, thousands of renters across the state have stopped paying, or have paid only partial, rent. Many of those rent stoppages and reductions – but not all – have been the result of tenants losing their jobs or being partially or fully furloughed. Others, such as gig workers and self-employed proprietors, have stopped or suspended business and have lost most or all of their income. Still other renters, to be sure, have not lost their jobs or income, but rather have decided to stop paying rent because their landlords have no recourse to evict them.

The state’s eviction moratorium expired at midnight on October 17. The federal Centers for Disease Control and Prevention’s eviction moratorium remains in place until the new year, but does allow some summary process cases to move forward. Courts will be significantly backlogged with eviction cases with the lifting of these moratoriums. A process is in place for hearing tens of thousands of cases, but summary process cases will inevitably be delayed.

H.5018 is the latest proposed solution for keeping as many renters as possible in their homes after the moratoriums have ended. Its structure – mainly of delayed and piecemeal payments of money owed to landlords through tax breaks – will undoubtedly be inadequate for many landlords. For many mom-and-pop and owner-occupied housing providers, who spend much of their income on rental upkeep, taxes, insurance and utilities, the law will not be workable at all. We review a couple of scenarios below.

Meanwhile, MassLandlords, since May, has proposed and promoted a Fair and Equal Housing Guarantee via Surety Bonds that would ensure that renters may retain their housing and that landlords would receive rent payments. This proposal would be funded through a nominal 1% tax on new single-family-zoned homes, which would help to increase much-needed multifamily housing in the state. The proposed plan has not gained traction with legislators in leadership.

It’s impossible to tally exactly how much rent is and will be owed collectively to Massachusetts housing providers. MassLandlords estimates 20.8% of all rental housing in the state is in arrears, with an average owed payment of $3,300. Some landlords are owed less than $100, while others are well into five figures owed in back rent.

According to H.5018, landlords who opt for the tax break payback over time may not initiate or pursue eviction for those tenants for whom they are claiming rental loss.

Meanwhile, the tenants will be forgiven for the rent owed if their lack of payment was the result of COVID-19 and the response. Presumably, this would refer to a loss of income due to a job layoff or furlough or other type of direct reduction in income because of the stalled economy. However, the language in the proposed law is broad.

The rental forgiveness provision of H.5018 would last for one year beyond the end of the State of Emergency.

The effect of 191 H.5018 would be like an extension of the eviction moratorium, almost indefinitely. In essence, under this bill, landlords would be required to support housing for their tenants without any compensation for at least one year after the lifting of the State of Emergency. And even when compensation does begin, as a tax credit, it would only be a fraction at a time of what is owed.

Let’s look at the reality of how this bill would work.

Consider a landlord who pays 5% of their net income to taxes (Mass. tax rate was lowered from 5.05% to 5% for the tax year beginning January 1, 2020). Let’s say this landlord has a unit that is pure profit under normal circumstances. In that situation, they would pay a full 5% of the gross rent proceeds to taxes. Therefore, at tax time, this landlord will receive a 5% credit. Meanwhile, this landlord has absorbed 100% of the costs for providing rental housing.

Paying 100% for housing now, and being reimbursed at a rate of 5% per year would mean a 20-year full reimbursement schedule. That’s the best-case scenario, because the State of Emergency may continue for months, or possibly another year. Under 191 H.5018, the “infinite moratorium” would continue for another year after that is lifted, potentially requiring landlords to fund 100% of housing without compensation for two years. At 5% reimbursement annually, that’s a 40-year payback schedule.

Now consider all the landlord situations in the state in which the rental unit is not 100% profit – cases in which gross rent proceeds are used to pay for mortgage, insurance, taxes, repairs, etc. In this case, rental taxes may be well below 5%. For some – especially new landlords who have invested in properties that will yield larger profits down the road – their rent taxes may be as little as 0.05%. Their full payback period according to the 191 H.5018 schedule? 200 years.

How many landlords can wait 200 years to receive rent payments?

As payback timelines stretch out for some housing providers, unlawful takings and other legal challenges will further complicate the issue. When the eviction moratorium has been litigated against, a primary defense has been that the regulation has not been so onerous as to constitute a total diminution of property value. Some owners, who have been deeply impacted by the pandemic response, could literally be receiving compensation beyond their natural lives under H.5018. This would likely precipitate new takings arguments in state and federal courts.

A similar bill has been hovering in the California legislature for several months. Unlike the Massachusetts bill, California’s SB 1410 does not include any form of rent forgiveness, except in specially granted circumstances. The state would pay back landlords’ owed rent via income tax credits, but not beginning until 2024, and would be  allowable for 10 years, through 2034. California renters would be expected to pay their arrears to the state over the same timeframe, according to a schedule preset by the state, unless they apply and are approved for rent reduction or forgiveness. (No language is included in the bill regarding enforcement if a tenant moves out of California while under the agreement.)

The California law is encountering predictable pushback from housing providers (and others) in the state, who have been and would continue to be saddled with mortgage payments, taxes, insurance and repair costs without receiving offsetting rental income.

If H.5018 becomes law, it’s not difficult to see that a lot of landlords will be forced to leave the market, some claiming bankruptcy. Others might find alternatives to eviction that could help them vacate their rentals or repair tenancies.

Many landlords have already run out or are running out of cash reserves and are deferring maintenance on their rentals as a result of the eviction moratorium. Some have walked away from their rental properties altogether, unable to sustain the costs without income.

Among MassLandlords’ membership, the rate of sell-outs has more than doubled this year, from 14% in February to 30% in August, even as membership reaches an all-time high of 2,000.

Meanwhile, property tax bills have come due consistently on schedule each quarter since the pandemic swept the country last spring and the governor declared a State of Emergency.

On paper, H.5018 might make sense to a state government facing intractable budget shortfalls and interminably backlogged courts. But this bill would do very little to help most landlords who have sustained the brunt of the COVID-19-related rental housing crisis. 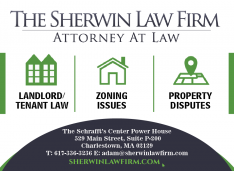