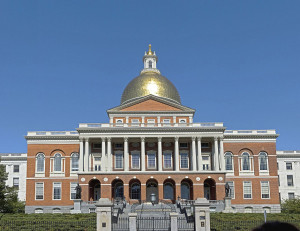 This morning we attended the first meeting of the Massachusetts Senate's Special Commission on Housing. The mission of this commission is broad: "To bring together housing professionals, academics, and advocates from diverse and differing viewpoints who will work together to forge a path towards a 21st century housing policy for Massachusetts." The commission is chaired by Senator Linda Dorcena Forry of 1st Suffolk and vice-chaired by Senator Harriette Chandler of 1st Worcester.

We counted 26 attendees, most of whose names were recorded (omissions or errors entirely our own). Starting at the head table and working clockwise:

During the introductions everyone said a bit about what their organizations cared about. We mentioned that the one thing uniting all MassLandlords.net members was a conviction that the landlord tenant laws here are not in alignment with best practices in use in other states. The tenant advocates in the room shook their heads and stated that it was a matter of perspective. We offered that we were here to work together. This short little exchange was the only controversy in the room during introductions.

After the introductions, it was clear that there were two major themes:

Two people separately contributed an inkling of the problem: apparently Massachusetts should have produced 17,000 new units of housing last year if we were to maintain the work force. We did in fact create only 3,000? These figures will be checked and reported on for the next meeting.

Senator Chandler had remarked at the outset that "nothing has been done in housing for a decade." It seemed to be true that everyone in the room had failed to reach their own public policy goals over the last many years.

A recurring theme among the builders and construction-minded was that there isn't enough new construction. They call this "production." Among the reasons proposed were:

Ray Mariano of the Worcester Housing Authority disagreed that new construction would eliminate the demand for housing. In cities like Worcester, far too much money would have to be spent to build the required number of low- or no-income units. The waitlist in Worcester for public housing was 15,000 people long. At a cost of $50,000 per unit, almost a billion dollars would have to be spent for construction alone (never mind ongoing operation of the facilities). (Mariano did not state that units would cost $50,000 each, but he did say that a billion dollars would be required.)

According to one attendee, there are only 80,000 public housing units in the entire state.

Mariano advocated for training programs like A Better Life as a way to increase self-sufficiency and reduce demand at the public end of the spectrum.

Can we Using Existing Housing?

By our best estimate, there are 70,000 small landlords in Massachusetts. It seems to us that maybe some of their spaces could be repurposed. One of the most surprising statistics shared by an attendee was this:

Is this true? If so, where will they live? How can they afford (why would they want) a large apartment? Much of the housing available today was constructed 100 years ago for larger families. If it's true that most new households are small, then some kind of massive subdivision of existing units might create a lot more housing a lot better than new construction. We will investigate this and report back.

The Goal for Next Time

Each attendee has been tasked to dust off past reports and make data-based recommendations. The first goal seems to be creating additional housing units.

When you live with others who also work, even the minimum wage can be enough to get a nice apartment.

Will any of these ideas gain traction? We'll prepare some data, present it at the next commission meeting, and let you know.

One Response to Massachusetts Senate Special Commission on Housing