Blog » What are the Massachusetts Heat Laws?

Massachusetts apartment heating laws are specified in the State Sanitary Code, officially 105 CMR 410 The Minimum Standards of Fitness for Human Habitation. This regulation has the force of law and governs all things apartment, including winter heating requirements. This article was current as of January 1, 2018 (see below on “Future Changes”). 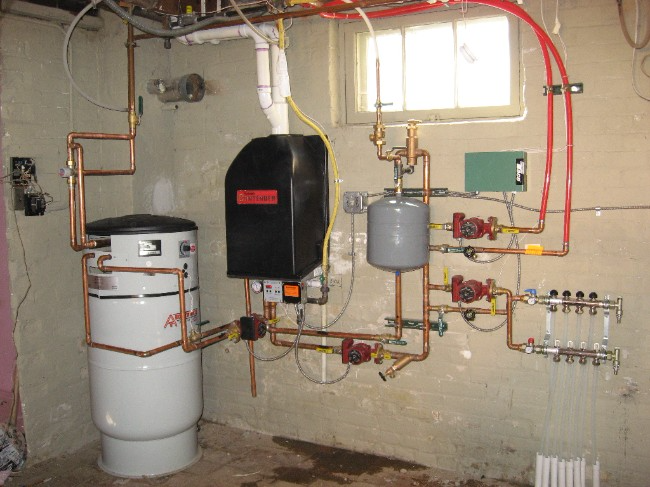 In layman’s terms, Massachusetts landlords must provide heat for every habitable room and room with a toilet, shower, or bathtub. Let’s parse this.

Note that temperature measurements (see below) are taken on an interior wall, five feet above the floor, five feet from an exterior wall.

What to Heat With

The sanitary code specifies heat sources that are not allowable. These are pressure-fed space heaters, parlor heaters, cabinet heaters, and room heaters that have a supply tank less than 42 inches from the center of the burner. They also exclude kerosene, range oil, number one fuel oil, and portable wick heaters.

Other than that, there are no specifications for what is allowed. You can have steam heat, wood pellets, natural gas, oil, geothermal, electric, coal, or anything else you invent, as far as the state sanitary code is concerned. (Note that if you wanted to go nuclear, you would have to get permission from the United States Department of Energy and/or Nuclear Regulatory Commission. Let us know if you try it.)

The Massachusetts heating season runs from September 15 through June 15, inclusive. That means officially we have three months of spring, summer, and fall in Massachusetts. The rest is legally considered the dead of winter!

What if the tenant pays for heat?

Tenants can pay for heat if it’s written into a rental agreement. No verbal agreements allowed!

If the written agreement says the tenant needs to provide fuel, but the tenant doesn’t provide fuel, and the temperature falls below the requirements, the landlord is not responsible. But even without fuel, the equipment must be in working order.

What if the Heat Suddenly Breaks?

Heating systems preferentially choose to fail on New Year’s Eve, Valentine’s Day, and the evening of your kid’s recital. They like the attention. If the heat breaks, you have an immediate violation of the state sanitary code. Rent might be withheld. You also have a risk of frozen pipes, hotel bills, and inspector fines. So there are real good reasons why you need to drop everything and investigate right away.

Sometimes you get lucky and the pilot light just went out. These can be relighted if you follow the manufacturer’s instructions. If the pilot won’t light, or if there are signs of a leak or explosion, call a licensed tradesperson immediately. It’s possible to get an older boiler or furnace repaired or replaced within 24 hours or before any serious heat is lost from the building. Keep calling plumbers until you find one who can be there right away.

If you haven’t yet invested in good communication with your tenants, now is the time. Text or call each tenant to let them know your plan. If the heating system has failed entirely, and if there will be several days’ delay in replacement, get spare electric space heaters and distribute these to affected tenants. You may need to buy them or you may be able to ask your local message board to borrow some. Also place temporary heaters in the basement to delay or prevent frozen pipes. Offer to pay the electric bill in exchange for the tenant using the heaters. Tell them you want to prevent frozen pipes.  Make sure your heaters are rated for your electrical system or vice versa. Do not use very old heaters, which may pose a fire hazard.

In the basement, if you have poor lighting, set up spot lights or other temporary lighting so that your plumber can work quickly and accurately. Expect a large bill.

An ounce of prevention is worth a pound of cure. Inspect your heating systems late in the summer. Know the age of your furnaces or boilers and have a savings goal to replace them preventatively at a time convenient for all concerned.

Members can talk to experienced landlords about heating issues and more.

36 Responses to What are the Massachusetts Heat Laws?