Blog » Lead Paint and Politics: How MassLandlords Hopes to Make a Difference by Being not Radical but Centrist

American politics is characterized by apathy, in which the majority of voters leave it up to only two parties to play to the fringes of the political spectrum. During primary season, the Democrats swing wide left, and the Republicans swing wide right. By the time elections happen, the sober-minded middle are so tired of the spectacle they’re ready to disenfranchise themselves. Voter turnout in the 20th century has averaged under 60% for the presidential election (Wikipedia), and just 40% for mid-term elections (FairVote.org). Meanwhile the fringe supporters spit increasing quantities of bile and vitriol. 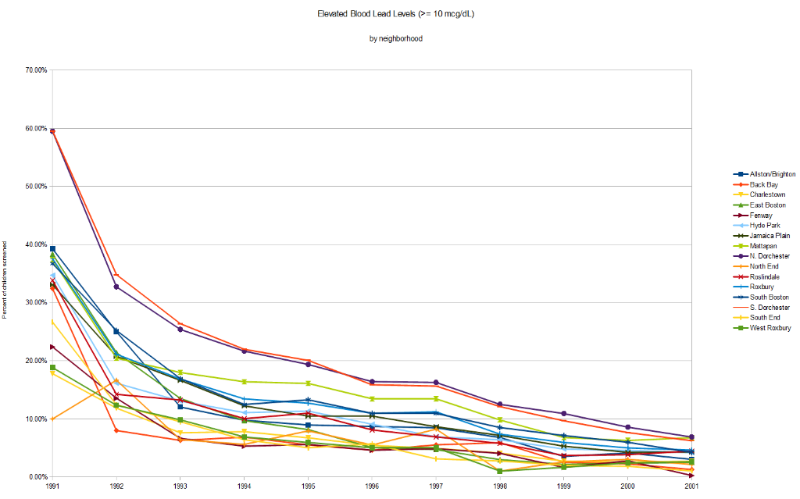 From the Walking Bostonian, an example of how elevated blood lead levels have been found less and less frequently over time. The graph runs from 1991 to 2001 and looks at various Boston neighborhoods. In 2001, no neighborhood had a greater than 10% incidence, and one neighborhood had zero incidence. Our lead policy has been successful by this metric.

The same phenomenon occurs in landlord-tenant law in Massachusetts. Far-left tenant advocates like City Life/Vida Urbana claim greed is the sole motivator of all landlords. And members of right-ish organizations like the Small Property Owners Association oppose even talking with the left.

In our view, the key difference between "radical" and "centrist" politics is one’s willingness to work with "the enemy," and the extent to which one uses hyperbole vs reasoned thinking.

Take Lead Paint as an Example

New regulations have been proposed that would lower the blood lead level at which landlords are liable for poisoning, among other things. See our other article, “Proposed Lead Paint Regulations are Flaky”.

A "radical landlord" view might be that these new regulations are scientifically dubious, self-serving, and ill conceived. No amount of new regulation in this space will be acceptable. On the contrary, we need to loosen the regulations because the problem is largely solved. Today's owners didn't create the lead paint problem. Blame the self-sustaining bureaucracy run amok.

A "radical tenant" view might be that all lead must be eliminated no matter the cost to society, no matter which landlords we purge or jail or fine in order to do it. Any child who gets poisoned should receive reparations from their landlord, who shall be presumed guilty until proved innocent in all matters of lead. Blame the greedy, heartless landlords.

Advantages of a radical view:

A "centrist" view would shelve the hyperbole and try to find the reasoned truth:
Lead has no biological function, and some quantity of it really does make kids intellectually impaired and less productive for the rest of their lives. Many homes, daycares, aviation fuels, and water systems still have lead hazards, so let's find a way to keep it from getting into kids.

Disadvantages of a centrist approach:

Some landlords within our ranks have radical views, one way or another. That’s welcome, and it serves a purpose. But MassLandlords is playing the role of centrist, trying to find the reasoned middle ground between any two diametrically opposed views. We may fall more to the side of property rights than a strict “averaging” would predict. The ideology of the left tugs heavily at Massachusetts. But we are, after all, people who make a living through our assets.

MassLandlords aspires to be centrist. Landlords have a valid, overlooked viewpoint, and we want it represented in comprehensive, sensible public policy. Let’s hope our feedback gets incorporated into the upcoming lead regulations. We might not be able to influence national politics, but we at least can make a difference in Massachusetts.