Blog » Is it Legal to Have Blocked Dates for Move-Outs in a Month-to-month Tenancy?

Some Massachusetts landlords are reportedly turning the idea of a tenancy at will on its head by attempting to block their renters from giving notice or moving out during certain colder months. 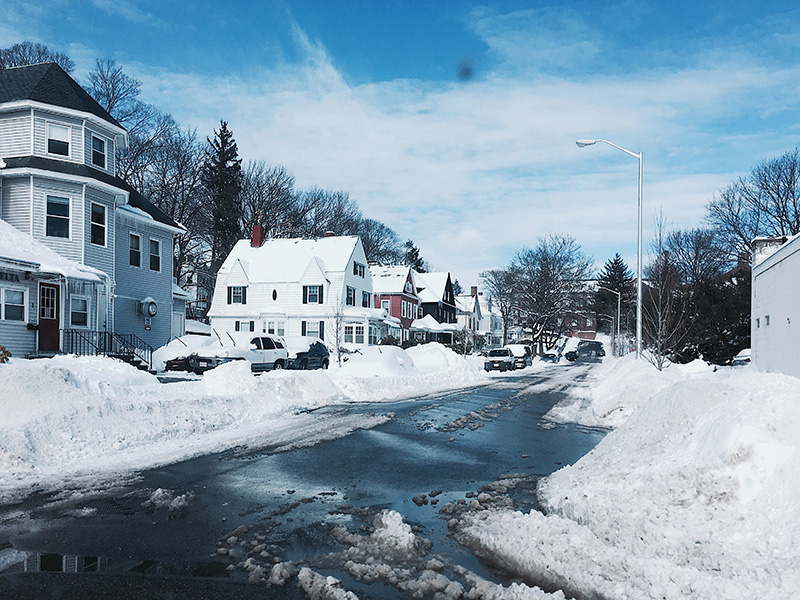 You may not relish the thought of coordinating tenant turnover in the snow, but prohibiting month-to-month renters from giving notice during the winter is not lawful.
Lic: Cloris Ying for Unsplash

Sound strange? Posts on Reddit revealed more than one Massachusetts renter confused by verbiage in their tenancy agreement that seemed to have “blackout dates” for giving notice. Showing an apartment or dealing with a move-in may be more difficult when the weather is cold and the streets are icy. But is this legal?

One renter on Reddit said they had signed a 12-month lease that required a 60-day notice to end the tenancy early and did not allow notice to be given from October to February. The renter went month-to-month after the lease expired, and was informed that the new blocked dates were from November to February. The tenant gave a 60-day notice in October.

“However, they are now saying that they won’t accept my notice to vacate and that I’m responsible for rent through several months of next year, citing the original lease terms,” the poster stated. And they were not alone.

“I am an at-will tenant. As long as I give a 30-day notice to vacate, I’m good to go,” another tenant wrote. “I [gave a] 30-day notice recently and asked my landlord if I’m all set to vacate on that date. They told me that they do not allow anyone to vacate in December and January and if I do, I need to pay rent for those months. I’m just wondering if there’s anything I can do?”

The Rental Agreement Says No Move-outs in Winter; Is That Legal?

A tenancy at will is different from a standard lease. When you are “at will,” or month-to-month, you should be able to give your notice whenever you want or need to.

In the first scenario, it’s problematic that the landlord was insisting that their tenant at will give a 60-day notice to move out. The law states that tenants at will (and their landlords) need only give a 30-day notice that they will not be staying. But to be sure, we checked with multiple lawyers familiar with housing law.

The answer from the lawyers we spoke to was a resounding “no.”

“I’ve never heard of such a clause,” said Katherine Higgins-Shea, an attorney from Holyoke, who went on to say that it would appear such a thing would be illegal. Attorney Adam Sherwin expounded:

A Lack of Reciprocity Makes Blocking Out Dates Unfair

Even if such blocked-out dates were legal in a month-to-month tenancy, one thing that makes such a clause unfair is that it doesn’t appear the rule goes both ways. The tenant cannot give notice in November or December. However, nothing in the Reddit posts describing these restricted tenancies suggests that the landlord could not give notice that they were ending the tenancy during that timeframe if they needed use of the property.

If your tenant can’t leave during certain months, but you can still give them notice during that time, that’s not fair to your renters, that’s an uneven balance of power, and not good landlording practice. And it could potentially be a legal problem for you as well. Chapter 93A gives consumers recourse against unfair or deceptive business practices. In other words, “unfair is unlawful in Massachusetts.”

I Really Don’t Want People Moving Out in the Winter. Do I Have Any Options?

If you absolutely do not want to deal with showing an apartment in winter or handling a move-out during those months, you have a couple of options. You can employ a property manager who may be able to handle the logistics in your stead. Or, you can stick to fixed-term leases, which require renters to give longer notice if they want to leave, and offer you some protections if you are not able to immediately rent the unit.

There’s a third option that’s legal, but rarely used, and that’s the quarterly rental. MGL Ch. 186, Section 12 permits landlords to rent properties “at will” in three-month intervals. Your tenant pays for a quarter’s worth of rent at a time, and remains on the property during those three months, at which point another payment is due.

The law states, “Estates at will may be determined by either party by three months' notice in writing for that purpose given to the other party; and, if the rent reserved is payable at periods of less than three months, the time of such notice shall be sufficient if it is equal to the interval between the days of payment or thirty days, whichever is longer.”

If you legitimately wanted to stop people from moving out during the winter months, you could in theory employ quarterly rental plans. The problem is, those are more likely to fail, because most people find it hard to save up that kind of money and pay it in one lump sum. If you want to give it a try, we recommend using a rent collection service like RentHelper, which encourages tenants to make more frequent payments for cash flow management.

Tenants and landlords who choose to have a tenancy-at-will agreement are often doing so because they appreciate the flexibility such a situation offers. Locking your tenants into staying during certain months for convenience or other reasons violates the spirit of such an agreement and sets up both parties for frustration. Set yourself (and your renters) up for success by making sure the only stipulations in your rental agreement are ones that are legally enforceable.

One Response to Is it Legal to Have Blocked Dates for Move-Outs in a Month-to-month Tenancy?