In June, the Department of Housing and Urban Development (HUD) announced that they were changing the formula for rent reasonableness in urban cores. We didn’t hear about it until just recently. The program is called “Small Area Fair Market Rents” or “Small Area FMR’s”. 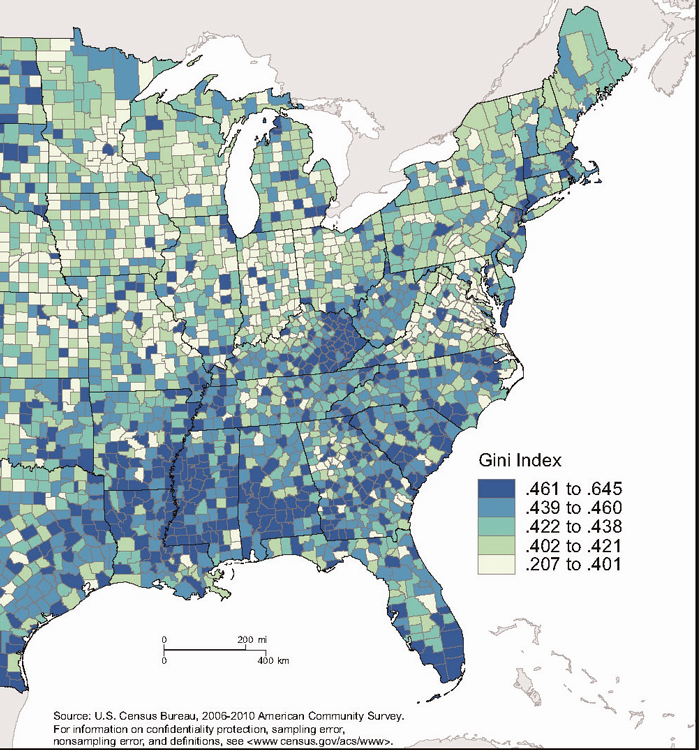 The 2010 Gini Index by the US Census shows Massachusetts ranks high for income inequality.

The federal “Housing Choice Voucher Program,” aka Section 8, pays rent for low-income tenants provided the rent is “reasonable.” The formula to determine reasonableness is based 1.) on an inspector’s assessment of the unit and 2.) on market rents for other similar apartments. Typically an apartment can rent for as high as the 40th percentile rent and still be “reasonable”.

HUD presently calculates reasonableness for 530 metropolitan areas and 2,045 counties nation-wide. These are large regions. The 40th percentile limit on rent has caused Section 8 tenants to concentrate in the poorest neighborhoods within these large regions. Voucher holders are disproportionately likely to be in poor neighborhoods compared to non-subsidized tenants renting the same types of apartments.

Prior to June, HUD had instituted a “50th percentile” exception to the reasonableness rule. This allowed HUD to pay higher rents in some urban areas. HUD found this made no difference: voucher holders remained disproportionately concentrated in poor neighborhoods.

In a “Notice of Proposed Rulemaking” published June 16, 2016, HUD declared its intention to eliminate the 50th percentile rule and instead evaluate rent reasonableness on zip-code by zip-code basis. Hence the program name, “Small Area Fair Market Rents”. Does this mean that a tenant who had previously been priced out of Brookline, a wealthy part of Boston, will now have access to certain Brookline units if they are reasonable for Brookline? Unclear. If we find out, we’ll let you know.

What Landlords Can Do about Small Area FMR’s

Our advice to landlords comes in four pieces.
First, remember that rejecting an applicant because they have Section 8 is illegal under Massachusetts law (MGL Ch. 151B Section 4).

Second, remember that Section 8 is designed so that a tenant will not pay more than one-third of their income to rent. Income standards on rental applications should therefore be adjusted or eliminated to avoid discrimination complaints. Applicants will still have to pass all the other elements of your rental screen, and should also be prepared to document proof of subsidy, and of its applicability to your unit.

Third, just because a tenant says they have Section 8 doesn’t mean the administrator will find your apartment rent to be reasonable. Subsidy administrators should be able to give you a rough idea whether, assuming your unit is in good condition, your rent will be found reasonable for the area.

Fourth and finally, always engage in dialog. Section 8 regulation places far more burden on a landlord than a market rate tenant would normally require. For instance, inspections are mandatory but slow to schedule, tenancy-at-will is prohibited, and electronic rental agreements may not be used, to name a few challenges. The discrimination law covers all of this, and HUD seems singularly uninterested in what landlords think. Our hands are tied. Treat all applicants in a businesslike manner. Document your interactions. Take the most qualified applicant. This should keep you out of trouble even if new Section 8 applicants start showing up at your previously overpriced door.