Rental Assistance for Families in Transition (RAFT) is a program that gives up to $4,000 to prevent a tenant from being evicted. This money can pay for rent, utility arrearages or other expenses needed to keep a tenant in good standing. It can also pay to help a tenant move out and into a more affordable apartment. 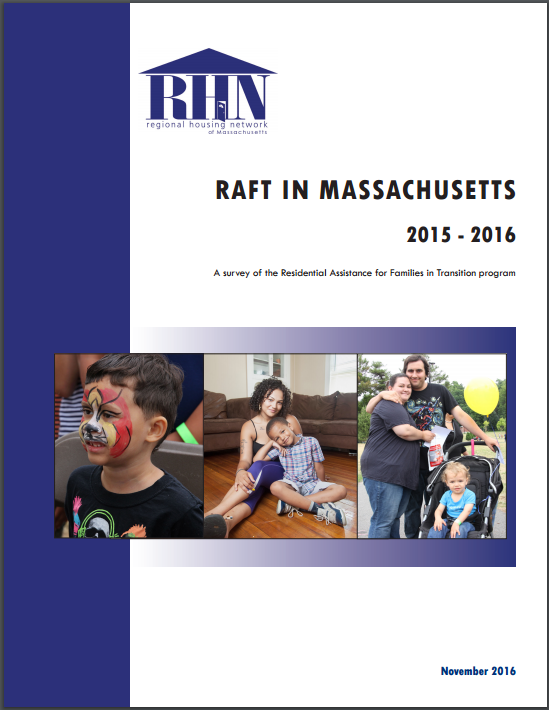 The cover of the November 2016 RAFT year-end report. Since a dependent child is a program requirement, we're assuming that the middle and right images are tenants, and that the far left is the landlord.

According to the year-end RAFT report, the Commonwealth paid $10,413,813 to landlords, utilities, and others in fiscal year 2016.

It is not known to MassLandlords whether RAFT is economically efficient (whether it benefits society more than it costs). The report was written by the Regional Housing Network, which is not a politically independent organization. According to RHN, the program saves society $13.17 in shelter costs alone for every dollar invested. If RAFT is this economically efficient, funding should be expanded until there are no more homeless people. If it isn’t actually efficient at all, we should use RAFT expertise and resources to try something else.

The November 2016 RAFT report manages to span fourteen pages without mentioning landlords more than once, and then in a negative and misleading context.

“My (landlord) took me straight to court after missing only one payment, and I was just about to be thrown to the streets after receiving a 48-hour eviction notice,” the report says. This is misleading.

First, since RAFT is only available when a tenant is taken to court, the landlord did the tenant a service by issuing the notice-to-quit after just one missed payment.
Second, no one is thrown in the streets after just 48 hours. The law requires at least 14 days’ notice before court begins. According to our 2015 eviction study, if this were an average case, the entire process would have taken 55 days. The final 48 hours’ notice is only if the lengthy eviction process will end in a physical move-out.

We cannot verify the particulars of this quote because the report doesn’t give a verifiable source.

Is it any wonder that few landlords have heard of the program? “Tenant advocates” have it wrong; they should be “housing advocates” working with both landlords and tenants equally. As they say on Twitter, #landlordsArePeopleToo.

To qualify for RAFT, you the landlord must issue your tenant a notice to quit. When the notice period finishes, you must then file a summary process summons and complaint. Your tenant cannot access RAFT funds until your eviction is a matter of public record. Your tenant must have a dependent child, make less than 50% of area median income, and be savable with $4,000 or less.

Where to Learn More about RAFT