MassLandlords staff have completed a review of the Early Warning System (EWS) as applied to housing-related bills posted to MALegislature.gov. Since EWS went live September 29, 2019, we have received notice of 76 updates to housing bills. Excluding outliers, the average backdate was 1.7 business days, meaning material is published with a stated publication date earlier than its actual publication date by almost two business days on average. Considering only notices of public hearing, more than half (59%) do not comply with the spirit of the open meeting law, which is two business days’ notice to the public. 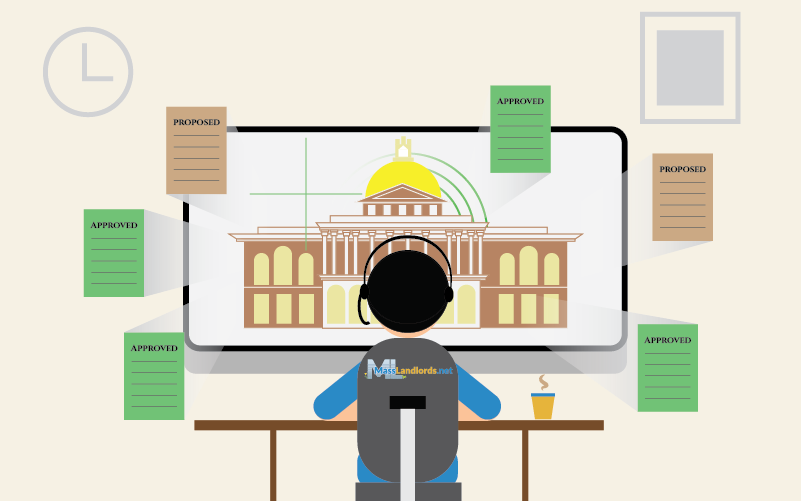 The Early Warning System regularly monitors websites for changes including MALegislature.gov. When a change is detected on a page of significance, the system notifies MassLandlords staff and volunteers. By calculating the time elapsed between the EWS notice and the date officially listed on the bill page, and subtracting the interval frequency at which EWS checks, we can determine whether the legislature has been issuing timely notice of hearings.

For example, a bill history may indicate that on July 7 a hearing was scheduled for July 10. This would appear to be three days’ notice. However, if EWS is monitoring that page daily, and does not detect the change until July 9, then the earliest that page could have been updated was July 8. The July 7 “official date” has been backdated by one day.

The EWS study revealed one good thing: the largest hearing of the last year was announced 26 business days in advance. But EWS also reveals problems.

One problem may be understandable. A public hearing scheduled for January 14, 2020 was scheduled to take place in a basement auditorium. Sewer odor there forced a last-minute relocation upstairs. Eight notices of hearing were updated with 25-business day backdates, making it appear that the upstairs hearing rooms were the intended location from the beginning. It seems likely that technology limitations combined with the desire to notify the public as quickly as possible resulted in a state house staffer choosing to update the old notices with the new hearing location. But it would have been better to issue new notices into the bill history, rather than rewrite history.

Of note remains 191-H1316 “An Act relative to the stabilization of rents in towns and cities facing distress in the housing market” (rent control). This bill was scheduled to be heard on January 14, but unlike others whose notices were updated for the sewer problem, this one was initially missed. The record was altered after-the fact on January 16, notice of which reached EWS on January 17, with the official notice date backdated to December 10, 2019, 28 business days earlier.

Excluding all of those 20+ day backdates as “outliers” justified by extraordinary plumbing problems, we still found 26 of the remaining 67 notices (39%) appeared backdated by at least one business day beyond EWS latency. In other words, the dates in the MALegislature.gov “Bill History” are inaccurately early at least a third of the time.

A benign explanation for some of the backdating could be server delays caused by a nightly publication cycle. This would not be state-of-the-art. MassLandlords.net site content, for comparison, can be published real-time without waiting for a nightly update.

A nightly server update would still not explain all backdated or late notices. For instance, notice of hearing for 191-H4190 “An Act Relative to Affordable Rental Housing” was dated November 12, 2019 for a hearing to be held that same day. This indicates no effort to meet the intent of open meeting law and no effort to hide that fact public participation was neither required nor expected.

MassLandlords staff will continue to monitor EWS output and legislative backdating. We will raise the issue through appropriate channels should it continue. The legislature is not formally subject to the open meeting law; alternative channels exist.

Members can participate in the Early Warning System