Homeless shelters in Massachusetts are concerned about some of the proposed changes to 105 CMR 410: Minimum Standards of Fitness for Human Habitation, otherwise known as the state sanitary code, including additions that would require more space between beds and blankets be laundered between each person. Changes to the code, critics argue, would place additional burdens on an already taxed system. But others say these changes are long overdue. 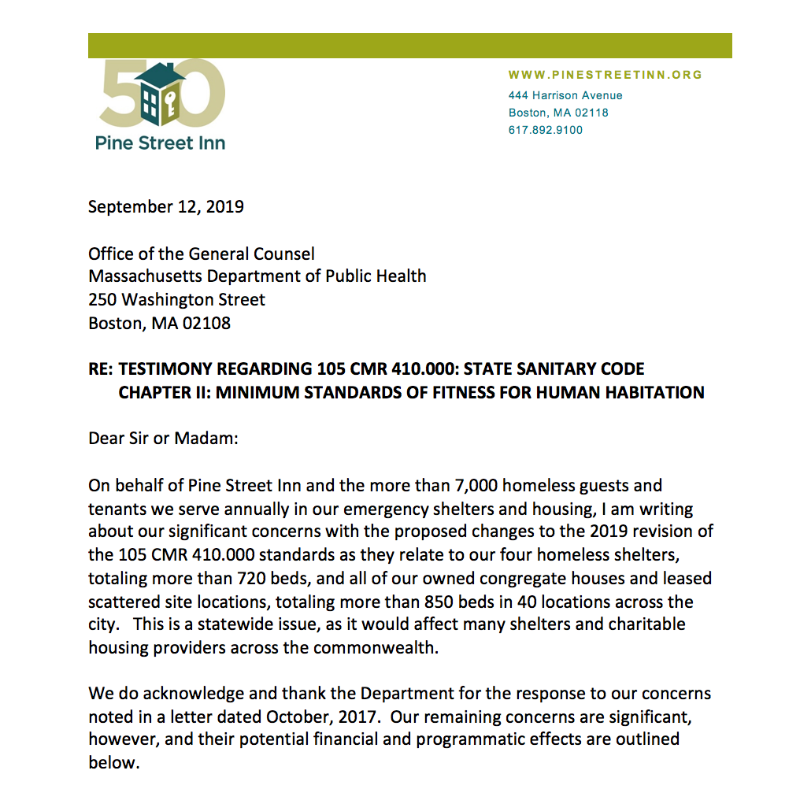 Changes to the state sanitary code could mean fewer beds and more work for Massachusetts shelters.

Homeless shelters are exempt from many of the mandates placed upon landlords of private rental housing, but have other issues to consider. Unlike private rental housing, homeless shelters often rely on dorm-style sleeping areas where unaffiliated individuals occupy the same space. Common bathrooms, cooking areas, and beds that may change occupants on a daily basis are somewhat unique to homeless shelters. And landlords renting private residences are not typically going to be providing or laundering bed linens, something that individuals experiencing homelessness or those of us in other transient housing situations may need help with.

Additional laundry requirements could be costly

With the addition of Section 410.235 (A) and (B) to the state sanitary code, owners of rooming houses or homeless shelters would be required to launder bed linens, towels and blankets between use by different individuals.  While none of the letter-writers questioned the laundering of sheets and towels, the requirement to launder blankets between each person caught the attention of Lyndia Downie, the president and executive director of Boston’s Pine Street Inn.

“This will increase staffing costs to launder each blanket daily,” she wrote in a letter to the Department of Public Health in September. This is the second round of public commentary surrounding proposed changes to the sanitary code, the first having closed in 2017. “There will be additional costs to buy and store an additional day’s worth of blankets in case of machine or staffing issues.”

(MassLandlords attempted on Nov. 15 and December 13, 2019 to reach Downie for additional information. At time of writing, we had not received a response.)

Where space is at a premium, sanitary code changes could mean fewer beds

Though Downie’s letter was the only one that addressed the laundering of blankets specifically, she wasn’t the only shelter representative with concerns. Multiple people wrote letters to the Department of Health to request revisions to the verbiage that requires a certain amount of square footage for each person sleeping in a room. They also expressed concerns surrounding the proposed space requirements between beds in those rooms.

410.420(D)(4) states that “in every residence, each room occupied for sleeping purposes by more than one occupant shall contain at least 50 square feet of floor space for each occupant.” There is no verbiage exempting homeless shelters from this requirement.

“Square footage per bed ratios…would remove 111 beds from our emergency shelters in Quincy and Brockton, a 43% reduction in our bed capacity,” wrote John Yazwinski, president and CEO of Father Bill’s & MainSpring, a homeless shelter based in Brockton. The group’s web site reports that they manage some 500 supportive housing units across the state. “During the cold winter months when temperatures plunge below freezing, this would be a death sentence.”

For the state’s homeless population, cold snaps can turn deadly. In western Massachusetts last January, two people were found dead after staying out in a tent overnight in freezing temperatures.

In an article from November 2019, a representative from the Pine Street Inn discussed the extra steps the group takes to keep as many people out of the cold as possible, including laying out extra cots and mats for people to sleep on, and calling other shelters if their four locations are full. If someone refuses to come to the shelter, they will provide extra blankets and food.

“We’ll check on them frequently, just to ensure they’re ok,” Barbara Trevisan, who works for Pine Street Inn, told boston.com. “Both of those are sort of heightened elements during the cold snap.”

The proposed amendments to 105 CMR 410.420(D)(5) state that homeless shelters must provide “a minimum of 3 feet separation between beds (4 ½ feet for double bunks) and the space should be configured to provide at least 6 feet head-to-head separation.”

Joe Finn, president and executive director of the Massachusetts Housing & Shelter Alliance, urged the Department of Public Health to include homeless shelters in the discussion of proposed changes in order for them to better understand the potential impact of the new requirements.

“A loss in shelter bed capacity without an appropriate increase in resources for permanent housing solutions would be detrimental to the Commonwealth’s efforts to end homelessness,” Finn wrote in a letter that was entered into public commentary in September 2019. Robert Mills, Chief Executive Officer of the Middlesex Human Service Agency, Inc., requested that (D)(5) be removed entirely.

“Many emergency shelters for homeless individuals utilize dormitory style bedrooms,” Mills wrote. “The space requirements…would drastically reduce the number of beds that can be in a dormitory setting, resulting in reduced capacity….This is an especially concerning situation during the extreme hot weather and extreme cold weather that Massachusetts experiences on a regular basis and will place homeless individuals in jeopardy.”

According to a report issued by the CDC, diseases such as tuberculosis and louse-borne diseases occur more frequently among homeless populations than in the general population. The CDC does not suggest a specific distance that should be observed between sleeping spaces. However, an article about administrative controls for tuberculosis in homeless shelters suggests that shelters maintain “as much space as possible between beds and [position] beds head to toe to reduce the possibility of transmission.”

MassLandlords’ input on homelessness and the sanitary code

Testimony written by Peter Vickery, MassLandlords Legislative Affairs Counsel, touched on a few issues relative to the proposed sanitary code changes that view shelters from the perspective of property rights.

“We appreciate the hard work performed by the many providers of assistance and homelessness shelter in our Commonwealth,” wrote Vickery, who went on to say that many residents of shelters (especially those who refuse to enter shelter) are concerned with security for their personal effects, including shoes, jewelry and food.
Vickery suggested that the DPH add language that requires homeless shelters to provide residents with access to secure storage, such as a locker, that could house things such as winter coats or boots. The language Vickery suggested, which can be found in this letter (click here, then scroll down to find the file for MassLandlords, Inc.) included provisions for access, abandoned property, and the nature of day-to-day transience at the shelters.

“We…thank you for this consideration in furtherance of private property rights, especially for those with the least, for whom even a small thing may be of great significance,” Vickery concluded.

As of this article’s publication, there are no amendments to the sanitary code proposed changes that reflect the letter writers’ requests. The DPH is not obligated to make changes based on public commentary, and could enact the changes as they are presently proposed. It also has the option to make additional revisions or allow or a third round of public commentary. MassLandlords will continue to provide updates as the process continues.