Our eyes are on Boston this month, as it makes local and national news for its lack of transparency in government dealings. From a pro-rent-control coalition springing up out of nowhere, to uneven practices when it comes to dealing with private groups, to meetings rescheduled at the last minute, it’s hard to know what’s going on in Boston these days, and not for lack of trying on our parts. And that’s a problem. 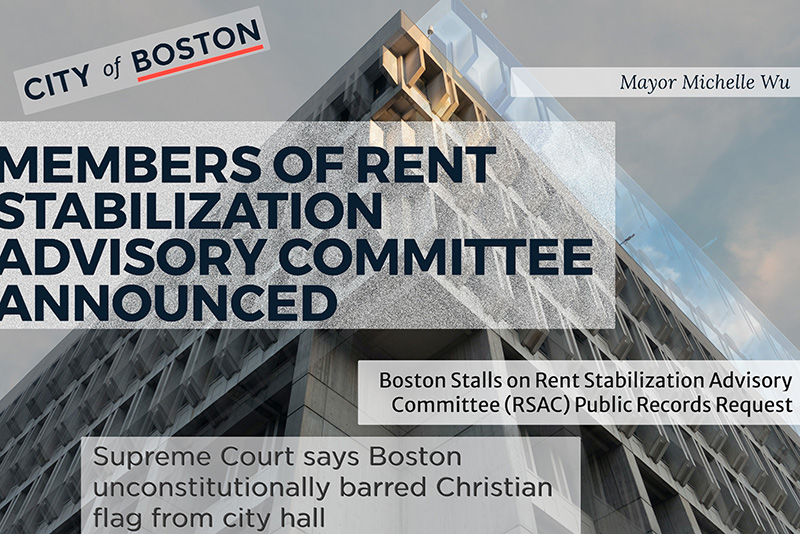 In Boston, a rent-control coalition seems to have formed out of the ether, and despite a recent order from the State Supervisor of Public Records, has produced only incredible, non-compliant responses to our public records request.

Regardless, more than 20 individuals were hand-picked to serve on the Boston’s RSAC. However, the city seemingly cannot produce any documentation about their selection, despite our public records requests. In short, our request for records showing how members were selected was met with a reply from the city that addressed none of our concerns.

After receiving that lack of response, on April 12, we appealed to the state Supervisor of Public Records. On April 27, 2022, the Supervisor’s office ordered the city to respond by May 11. Our attorney handling the public records request heard back from the office of Boston’s director of public records that day. The office stated that they did plan to provide a response to our request, and that the office was working with the city to determine “who may possess any responsive records.”

Then, we received an email with the one record that we had already been given: a welcome e-mail to the committee dated March 11, 2022. We have yet to receive any records about how, when or why these individuals were selected.

On April 28, we wrote again to the Supervisor of Public Records, stating that the city’s reply fell short of what is required for a response to a public records request. For instance, we asked for records relating to the establishment of the RSAC, and received none, as though the committee were simply dreamed into existence. The city had told us that invitations were established via phone call, so there were no email records, but we had asked for any records surrounding selection. Boston is making it seem like someone in the mayor’s office sat down one day in March and started calling people at random (coincidentally, it seems, all people who might support rent control).

On April 29, the Supervisor wrote back to the public records office in Boston, giving them 10 days to respond. To date, we have not received additional correspondence from the city.

The RSAC is a group that is being tasked with drafting legislation that could have a serious impact on housing in our state; it’s imperative that the city is open about its committee selection process. You can’t have a complete lack of transparency and not expect legal backlash. We are prepared to go to court on this matter if need be.

(This lack of transparency or oversight happens on a state level as well. Take the massive number of rejected RAFT applications throughout the state. We ended up suing the Department of Housing and Community Development over its lack of transparency in approving or rejecting applications, as well as communicating rejections or “time outs” with applicants. Our hearing is June 15 at 3 p.m. in Boston.)

But back to Boston. It’s not just rent control that’s drawing attention to the city. On May 2, 2022, the U.S. Supreme Court unanimously ruled that Boston violated a group’s right to free speech when the city refused to fly a flag with a cross at City Hall.

Between 2005 and 2017, the city allowed private groups to raise various flags on one of the three flagpoles in front of City Hall. During that time, Boston approved all the applications it received, some 285, before rejecting Camp Constitution’s request to fly a Christian-themed flag.

Why was the request denied? Boston claims it did so because it was concerned that flying a blatantly religious flag would be viewed as an unconstitutional endorsement of one particular religion. Camp Constitution is an alt-right Christian group that has questioned the validity of Covid-19 vaccines and claimed that the January 2021 attack on the Capitol was a cover-up for voter fraud. It has also claimed that 9/11 and Pearl Harbor were “false flags.” The city of Boston has since ceased allowing private groups to raise flags so that it does not have to “publicize messages antithetical to its own.”

We certainly don’t blame Boston for not wanting to fly a flag representing a group that seems, despite its name, to be wholly un-American. But you can’t approve everyone’s flag for years and then turn down one group’s and not expect to end up in court. The Supreme Court told Boston they were in the wrong for denying Camp Constitution’s request simply because the city did not endorse its religion or viewpoints. (Because this was a private group, and other private groups had been allowed to use the flagpole, this issue did not fall under the guidelines set forth for separation of church and state.)

The RSAC was scheduled to hold a “listening session” on Tuesday, May 10, from 6 to 7:30 p.m. (Note that the terminology chosen, “listening session,” as opposed to “hearing,” continues to excuse the RSAC from the open meeting law.) MassLandlords members in Boston, our Executive Director and at least one journalist attempted to log in, only to find that the webinar had been “updated” exactly at 6 p.m. to a new date, May 24. What did this mean?

An email sent nearly two and a half hours later by Mike Firestone, Chief of Policy for the city, explained it. Firestone asked registrants to “Please accept our apologies for the last minute cancellation of tonight's Rent Stabilization listening session.” The stated reason was failure to obtain “a key translator.” Which language and why we couldn’t at least listen to other languages was not explained.

One member on our Boston message board summed it up best, saying “it is hard to believe that Sheila Dillion [Chief of Housing, City of Boston] was willing inconvenience hundreds people who made time for the ‘listening meeting’ about Boston rent stabilization because one translator was not available. I suspect the real story had more to do with the large number of property owners who registered for the webinar. They cancelled the meeting and then had to scurry around to come up with that lame excuse.”

When you are a public servant, you are tasked with doing what is right for your constituency. This means applying your rules fairly for all. It is unfair to Massachusetts residents to have its leaders making decisions behind closed doors when our Public Records Law calls for transparency in these matters. Transparency helps everyone; restricting it only erodes the public’s trust in a system purportedly set up to serve them.