On October 4, Boston City Council voted 10 to 3 on a reduced form of Just Cause Eviction Rent Control. The Jim Brooks Community Stabilization Act requires owners to copy the City of Boston on notices to quit. The Act also restricts foreclosing owners from evicting without “just cause.” 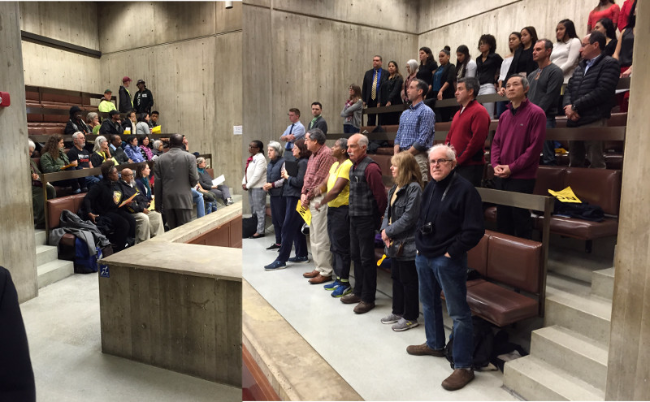 At the November 30, 2016 hearing, tenants (left) and landlords (most of right) appeared at the Boston City Council hearing in roughly equal number.

This article will review what advocates and opponents have said, how the Act has changed over time, and what happens next.

Supporters of the Jim Brooks Community Stabilization Act are worried principally about low income or elderly households being evicted and unable to find comparably priced housing in the same neighborhood.

Supporters do not approve of gentrification, particularly when it is driven by large developers or landlords who evict an entire building to deliver it empty.The act is underscored by mildchrematophobiaandxenophobia. The first sentence on the website supporting the Act is, “Boston was named as the city… 4th highest in foreign speculation in the US.”

Supporters like Sheila Dillon, Director of the Department of Neighborhood Development for theCity of Boston, have testified that the Jim Brooks Community Stabilization Act is not rent control. They argue that theAct does not trigger MGL Chapter 40P, which would require the City of Boston to reimburse owners for losses caused by the Act. They also statethat the Jim Brooks Community Stabilization Act does not recreate the so-called “rent control boards” of yesteryear.

At a debate on WGBH Greater Boston December 7, 2016, Lydia Edwards, then Director of the Office of Housing Stability for the City of Boston, said the Act was primarily about gathering data. Chronic individual and family homelessness remains intractable with existing agencies and funding. It is believed that the Act will shed light on the first step of becoming homeless.

When asked if the same Act could be passed in Cambridge as in Boston, the Solicitor for the City of Cambridge wrote a January 11, 2016 memorandum to the City of Cambridge City Manager. “It is my opinion that enactment of a local ordinance regulating rent increases or evictions would likely be determined… to be an invalid exercise of the City’s municipal power under the Massachusetts Constitution.”

Owners and managers have strongly opposed the “just cause” provisions of the Act as a backdoor form of rent control and a trigger for MGL Chapter 40P. The Act says that certain evictions would not be allowed to proceed unless a cause was specified, and unless the cause was one of the so-called “just causes.” Conspicuously absent from the list of just causes is the tenant’s refusal to sign a rent increase.In practice, this means that tenants can refuse to sign all rent increases,meanwhile the owner is powerless to end the tenancy.

Owners have said that these provisions create “tenants for life” and fundamentally alter the nature of rental agreements, which are intended to be finite. Owners have called for alternative measures to address homelessness, including zoning reform. 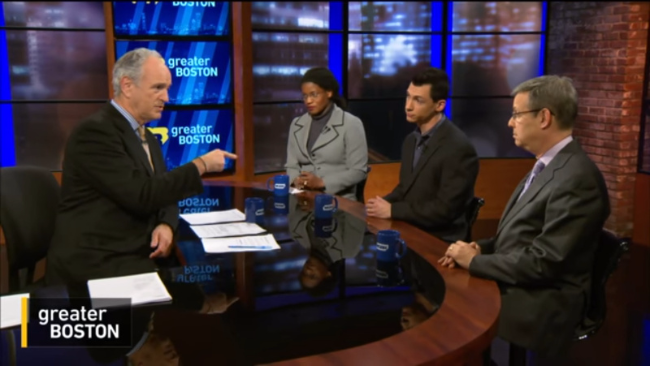 The public discourse around the Jim Brooks Community Stabilization Act has been dysfunctional due to the back-room nature of its text and the broken hearing process used to push it through. If anyone besides landlords cared,some at the city might lose their jobs.

In late 2015, the first version of the Act was circulated. MassLandlords obtained and posted this version.

On November 30, 2016, the idea of the Actwas heard in City Council chambers without the Actactually being filed. Landlords prepared objections by paragraph number, but tenant advocates saidthat landlords were working to an old version, that the latest text didn’t have any of those objectionable provisions. Without a public record of the text, it was a way for tenant organizations to test landlord opposition and back off if necessary without losing face.

Tenants’ Rights Organizations and the City of Boston were both written into the first version. They were the intended recipients of the copies of notices to quit. Ostensibly they wanted to contact tenants to inform them of their rights. Practically speaking, the lists of notices would have ended up in the hands of strike groups like City Life/Vida Urbana, who have been alleged to have used intimidation tactics against owners.

On December 5, 2016, the mayor’s office issued a public statement claiming that landlords had been part of the conversation about the Act and supported it.

On January 31, 2017, MassLandlords filed a public records request asking to see which owners contributed to the Act, when, and what they had said. Although 121 pages of information were returned from the Mayor’s office, none of it supported the mayor’s claim of involving landlords in a conversation. There was substantial evidence of tenant conversations, including one meeting between the Mayor and Darnell Johnson, spokesperson for a coalition of tenant groups including City Life.

On March 6, 2017, the second version of the Act -- the first to be filed publicly –was heard by the City Council. Landlord advocacy from the first hearing and the public records request had evidently been effective. In the second version,references to Tenant Rights Organizations had been effectively removed, and the 5% per year limit on rent increases had also been removed. The just cause eviction prohibitions still applied both to landlords and to foreclosing owners.Owners were still required to copy the city on all notices to quit.

At the hearing, landlords argued that the lack of “refusal to pay a rent increase” as a “just cause” meant that tenants would become “tenants for life,” so long as they followed the other lease rules, at the same fixed rent.

Attorney Stuart Schrier made a compelling argument that the Act violated state and federal fair debt collection practices acts. In our view, his arguments were critical in chipping away at the second version. There was no vote.

On October 4, without a public hearing, a third version of the Act was scheduled for a vote. This time, the just cause eviction prohibitions were removed for landlords but left applied to foreclosing owners. Landlordswere still required to notify the city.This is the version that was voted on and passed. 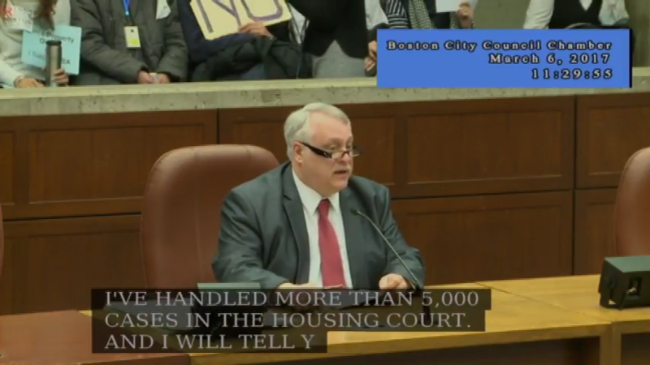 Attorney Stuart Schrier said at the March 6, 2017 hearing that anyone could use the Federal Fair Debt Collection Practices Act to enjoin the City from enforcing the notification requirement of the Jim Brooks Community Stabilization Act.

Now that the City of Boston has endorsed the Act, through their elected Council, the text has been filed with the legislature for approval. As of publication, MassLandlords could not verify a docket or bill number. If the legislature approves, the Act will modify the eviction law within Boston city limits.Precedent will be set for other municipalities to adopt similar Acts.

A website set up by tenant advocates is asking tenants to contact their state rep and senator, as well as the governor, in support of the bill. Their description of the bill does not reflect its current diminished form.

The Department of Neighborhood Stability, the Mayor’s office, and the City Council have not replied to MassLandlords’ requests to collaborate with tenant advocates on alternatives.