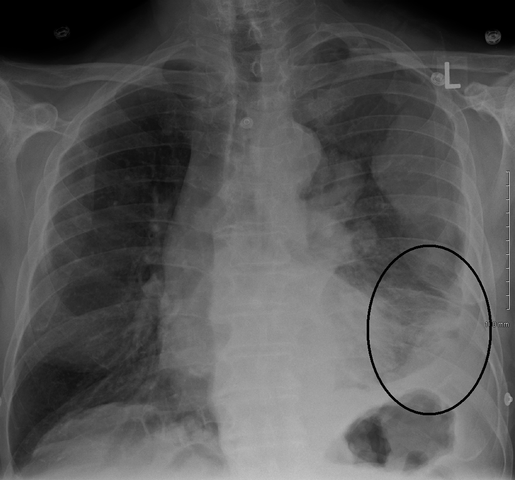 Image of Mesothelioma caused by Asbestos. What you can’t see can hurt you. James Heilman MD

EPA clean-up limits require there not be one asbestos fiber in 100 cubic centimeters of air. Landlord alleged to have made toxic clouds of asbestos dust.

On September 15, 2016, landlord Ronald Oliveira settled allegations about illegal asbestos abatement in Suffolk Superior Court. Oliveira agreed to pay a $65,000 fine and to inspect 20 properties for asbestos risks. If he does not complete the inspection to the court’s satisfaction, he will pay $100,000.

Attorney General Maura Healey detailed Oliveira’s civil violations in a press release. Oliveira’s settlement does not constitute admission of wrongdoing, but the AG alleged serious violations at four of Oliveira’s New Bedford properties:
First, in September 2009, that Oliveira’s contractors pressure-washed shingles while wearing no protective clothing, and got covered in asbestos dust;

Second, in January 2011, that Oliveira’s contractors demolished large sections of an asbestos-covered exterior wall, and left dusty debris by the sidewalk. without informing the contractors that the siding was asbestos, and without taking measures to protect passersby;

Third, in March and April 2011, that Oliveira’s contractors threw dry asbestos debris into the yard of the building they were renovating; and

Fourth, in July 2013, that Oliveira’s contractors broke tiles in the basement and left the debris there for a month.
The press release doesn’t indicate whether it was the same contractors each time, whether they were complicit in violating the law or merely duped, or whether there were other violations.

Why Asbestos is Really Bad

Asbestos is a mineral filler material that was used frequently until 1989, when it was partially banned. Unlike lead paint, asbestos can still be purchased and used today, despite the fact that minute exposure can lead to prolonged illness and death later in life.

OSHA exposure limits state that there can be at most one single asbestos fiber floating in every 10 cubic centimeters of air.  EPA clean-up limits require there not be one fiber in 100 cubic centimeters. If you can see dust, you’re doing it horrendously wrong.

But What is an Environmental Justice Neighborhood?

Asbestos should not be touched or interacted with in any way except by professionals. You cannot put your customers, your contractors, or the public at risk. It’s not your choice to make. And when the attorney general levies six figure fines, you might as well pay to do it right.