Blog » Worcester Breaks Ground on Housing for Those Experiencing Homelessness

On August 29, 2022, the Worcester Housing Authority broke ground on A Place to Live, a housing complex two years in the planning that will provide living space for people experiencing homelessness. 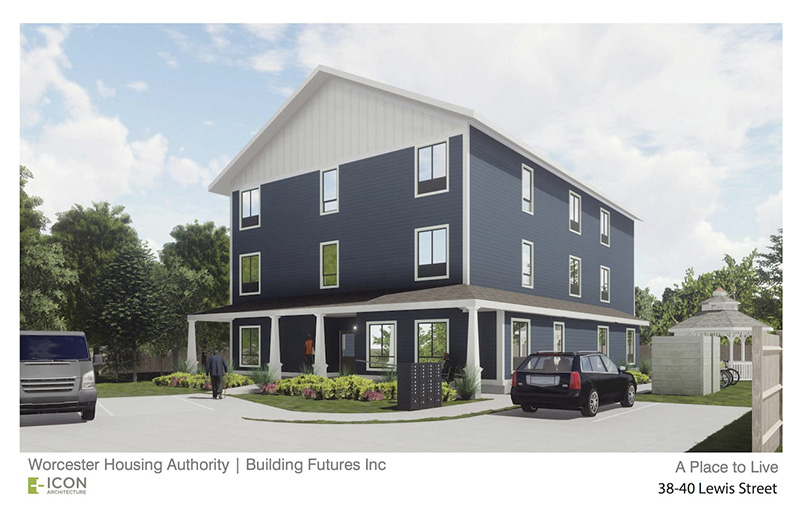 Worcester officially broke ground for the “A Place to Live” housing complex in August 2022. The structure will have 25 units, 24 of which are earmarked for people experiencing homelessness.
Lic: Rendering courtesy of the Worcester Housing Authority

A Place to Live is being constructed on land at 38 Lewis St., already owned by the Worcester Housing Authority. The facility will have 25 studio units, 24 of which will be available to unhoused applicants. The remaining unit is reserved for an onsite manager.

Originally designed as a series of pre-fabricated (modular) micro units that would be assembled offsite, the housing authority announced the project in June 2020, but hit pandemic-related delays and cost inflation.

The project was initially budgeted at $3 million for prefab construction. However, as both costs and demand for prefab housing rose, that became the less economical option, according to Worcester Housing Authority CEO Alex Corrales. A quick look into the rising cost and wait lists surrounding modular housing shows that it is indeed much more expensive to have a prefabricated house built than it was before the pandemic. Traditional housing construction is still more expensive than a modular project, however. The project will now be constructed on-site, meaning less of a delay than waiting on modular housing. But it will still cost approximately $6 million, double the original estimate.

A Brief History of A Place to Live

The concept of A Place to Live – that is, scalable modular micro-housing models that can easily be replicated and tailored to fit cities’ needs – was first introduced by the Massachusetts Housing and Shelter Alliance in 2018.

“Through the expansion of PTL [Place to Live] across Massachusetts, MHSA will be focusing on racial equity and creating ways that housing and services are available to people who need them the most, in order to close the persistent racial gaps in homelessness,” the MSHA wrote in 2018.

The Worcester Housing Authority was the first Bay State housing agency to get permits and approval for the concept in 2020. Though the method of construction has changed, the project will still go forward under its original name.

What Will the Micro Units Look Like, and Who Gets to Live There?

The Lewis Street complex is slated for completion in early summer 2023. Each studio apartment in the three-story complex will have a kitchenette and a bathroom. Twenty-four of these will be allotted to the unhoused. The housing authority will work with other housing agencies to reach out to homeless individuals and help them with the application process. Once the applications are in, residential selection will be done by lottery.

Two of these units will be wheelchair accessible and will meet ADA requirements for accessible housing.

Rent for all units will be on an income-based sliding scale, capped at 30% of the resident’s income. A resident who has no income will pay $0 in rent.

A Place to Live will be considered “low-barrier housing,” in which the primary goal for residents is to remain housed. Some shelters or housing for those experiencing homelessness will insist on sobriety, or staying off recreational drugs, in order to retain tenancy. Those kinds of compliance requirements will not be part of this project.

In other words, a tenant who struggles with mental health and medication compliance will not be evicted if they do not stay on their medication. Those recovering from substance use issues will not lose their tenancy if they use alcohol or other drugs. A case manager will be available to assist tenants in getting any services they may need, including obtaining access to health care and mental health services.

It’s too bad that the initial modular housing plan could not be implemented. Doing so would have saved money (had prices not skyrocketed) and time, as the units could have been constructed off-site at the same time that the foundation for the complex was being poured.

However, any housing at all is a step in the right direction toward ending homelessness. We will continue to update this article as construction progresses, and hope more communities across the state embrace similar projects in the near future.