Blog » Why Weren’t My Membership Dues Grandfathered In?

In the summer of 2021, we announced that our membership prices would be increasing for the first time in 7 years. An article announcing the change appeared online in July and was published in the August 2021 newsletter. Directed emails also went to all of our members notifying them of the coming changes and alerting them to grandfathering deadlines. Additionally, a printed letter was sent to each member’s address on file 60 days before their renewal. 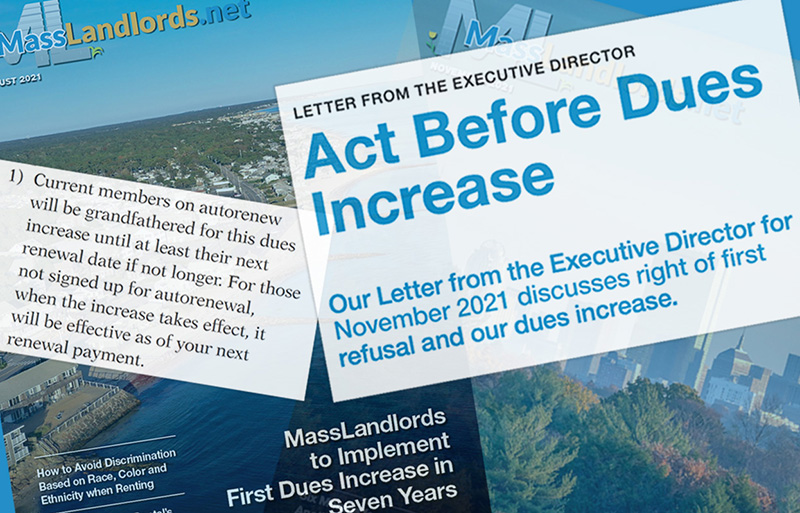 The option to have membership dues grandfathered in expired at the end of December 2021. Though many reminders were sent out, the intention has always been that eventually, everyone would pay dues under the revamped pricing structure.
Lic: CC by SA 4.0 MassLandlords Inc.

Who was eligible to have their dues grandfathered in?

When we announced the upcoming change in pricing, we let current members on the autorenew plan remain at their grandfathered rate until at least their next renewal date, or as long as autorenewal was successful.

Members were eligible to have their rate grandfathered in if they joined MassLandlords prior to Dec. 29, 2021, paid with a credit card prior to that date and had autorenew turned on for their membership. This means members who wanted to lock in their rate had several months to enroll in autorenew if they were not already set up for it.

For members who did not opt for autorenewal, or who paid by check, the increase was effective as of their next renewal payment.

I had autorenew turned on, but I did not receive a grandfathered rate. What happened?

Grandfathered rates were dependent on autorenew payments going through successfully. If you did not keep a valid card on file with us, or did not update your card when it expired, the autorenew payment would have failed, removing the option for grandfathering.

Where were we informed about the dues change, and the grandfathering option?

Both the old pricing structure and grandfathering program ended after Dec. 29, 2021. Notice went out starting in July 2021, and included multiple notifications on both our email and newsletter platforms. A reminder was also published in the November 2021 newsletter.

Finally, we mailed a physical letter detailing all of the upcoming changes to each member 60 days before their renewal date. This letter went to the address on record with MassLandlords.

We encourage all our members to read our newsletter and email communications. If you have not been receiving our emails or newsletters, please make sure your membership reflects the correct email address so you stay up to date on changes with membership, best practices and rental housing law in Massachusetts.

Why were only some people allowed to be grandfathered in?

It has always been our intention that all members would eventually pay dues under the new pricing structure. Grandfathering in members on autorenew was an incentive to use the autorenew program. Autorenew is a cost-saving measure that takes little effort for everyone involved. Members not already enrolled in autorenew had several months to switch to an autorenew plan and benefit from grandfathering before the program expired.

Our new pricing plan has been developed so that you pay based on where you have rental units, and how many housing units you manage. It was important to us that membership remained affordable for landlords, while continuing to provide all the resources that still make membership a fantastic value under the new plan. And, we’re still less expensive than many other business trade associations throughout the state.

One Response to Why Weren’t My Membership Dues Grandfathered In?