Blog » Talk to your Tenants About Spiders

Twice in the past year, California residents have burned down their building trying to kill spiders.

On October 23, a man house-sitting for his parents thought he would eliminate the spider population adorning their Fresno building. He used a handheld propane torch (think plumbing) to burn webs and spiders. The flames went into the building, up the studs, and burned their way through the attic and roof. No one was injured. 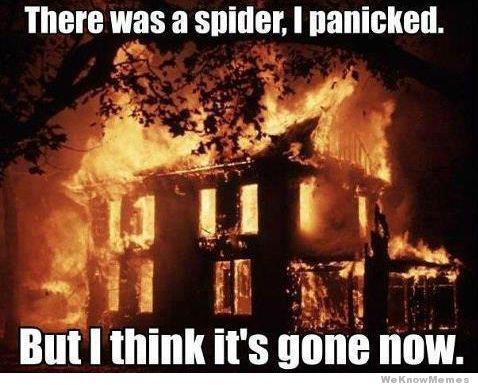 On January 7, 2018 a renter under caregiver supervision in Redding used a handheld torch lighter to kill a spider. The burning spider ran onto the bed, setting in motion a $10,000 loss and rendering the unit uninhabitable.

The two cities are approximately four hours apart. There is no reason to believe the two California fires are related, although renter names have not been released.

On September 27, 2015, a man in Michigan set a gas station ablaze trying to kill a spider near his gas cap with his cigarette lighter.

On July 15, 2014, a renter in Seattle used spray-paint and a lighter to kill a spider in his laundry room.

On June 29, 2014, a homeowner in Hutchinson, KS was charged with arson after she used a cigarette lighter to set fire to some towels and use them as a flaming lasso to catch a spider.

The story has repeated since 2012 with spiders and with bedbugs. The idea “kill it with fire” ought to be considered a minor malignancy. In the style of the bedbug warning sheet, landlords should include a fire safety sheet. It might say, “Don’t kill insects with fire” and give related warnings against leaving stovetops unattended, against disabling smoke detectors, and against using candles.