A Springfield city councilor recently proposed broad-based apartment inspections as a way to clamp down on problem properties.  You can read about it at CBS Springfield. 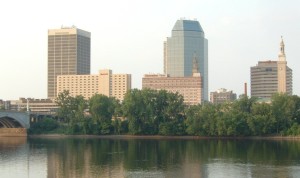 Although we aren't sure how many problem properties there are in Springfield, an inspection ordinance strikes us as bad government for two primary reasons.  First, the economic model does not adequately cover costs.  Second, there are already mechanisms in place to report and correct problem properties.

There are other reasons why inspections are not the answer.

The fees will either not cover city costs or not accomplish objectives.  The proposed ordinance calls for an up-front $25 fee, $15 per unit per year, and $10 per inspection every four years.  In the first four years, that amounts to $95 per inspection.  Compare that with a credit reporting agency conducting an on-site inspection.  The on-site typically looks for four things: a dedicated business space, a locked cabinet, a password protected computer, and a shredder.  Credit Bureau Associates Northeast charge $100 for each inspection.  The cheapest price we've seen in the market for this four-point inspection is $60.  The city of Springfield would have the same budget to work with, but instead of doing a four-point inspection, they would have to report on a large percentage of the 28 page,  270 bullet point State Sanitary Code.  (And for some bullet points, like outlets, lights, and windows, dozens of interior locations must be inspected.) The costs of a thorough check would not be covered by the proposed fees and would therefore amount to a new tax on all city residents.  Either this or else only the most obvious violations would be detected.  Oftentimes these are only cosmetic and unrelated to health and safety, with deeper, unassessed problems lurking elsewhere.

It is already possible to get a problem property inspected.  Just call the Springfield Department of Code Enforcement, Building Division.   We believe this group of trained public employees is currently able to deal with problem properties as they are called in.  There is no need to require them to inspect all properties.  If an apartment does slide into negligent decline, it can easily be called in by residents or neighbors.  If residents are not calling in problem units, city government might direct its effort toward educating renters.  An ordinance requiring that new renters be given a link to the Code Enforcement website would cost essentially nothing and potentially accomplish far more.  A well-crafted ordinance would allow the landlord to state, "Please call me first" and would require the landlord to acknowledge existing laws against retaliation.  This would encourage communication between landlord and tenant and also provide the desired recourse.

On Monday 7/21/14 6:30pm several RHAGS members and Realtors were at Springfield City Hall speaking out against a proposed ordinance that would require all rental units to be registered and inspected.

Our voice was heard and this proposal was sent to study. While I could not be there and speak, two past RHAGS presidents were there (Paul Sears and Attillo Cardoropoli) as well as our current VP Sheryl Chase and board members Kevin Shippee and Peter Houser along with others members showing solidarity.

Our forum system helped get the word out short notice and we look forward to all members future support on other local and state wide issues.

Our elected officials need to continuously hear from us as experts in our industry of rental housing. As we get more engaged with our officials they will hopefully seek us out for advice before proposing ordinances or laws that impact our business.

See the below letter from the Realtors which was submitted that night which summarizes key points made.

And the letter from the realtors:

The Realtor® Association of Pioneer Valley (RAPV) represents over 1,500 REALTOR® members and champions private property rights for the entire Pioneer Valley. RAPV supports the goal of clean, safe, housing in Springfield and shares the Council's frustration with owners who violate existing law. However well intended, we have the following reservations and concerns with the proposed Chapter 12.20, Residential Rental Occupancy Permits, as drafted:

Don't Penalize the Good Owners Who Play By the Rules
It appears that the ordinance primary goal is to identify and provide measures to combat notorious problem properties. However, the proposed ordinance places the burdens on all owners of rental property in Springfield.

Inefficient Use of Limited City Resources
Currently, anyone can file a potential code violation with the Springfield Department of Code Enforcement / Building Division. Upon receipt of such a complaint, an inspection by the Housing Code Enforcement will be performed to insure that violations are corrected. The ordinance, as proposed, will require the inspection of residential apartments in the city of Springfield every two years, regardless of whether the unit has, or ever has had, a complaint or violation. It is hard to believe that the City can accomplish this daunting task each year. As such, it would appear that the current system, where city resources are applied to properties that, in fact, have issues, rather than to properties where no violations or complaints are noted, is a more efficient use of City resources.

RAPV is ready to work with the City of Springfield on alternative solutions that would truly maximize the effectiveness of City resources in rental property code enforcement. Therefore, we urge the Springfield City Council to vote NO on the proposed Residential Rental Occupancy Permits ordinance. Do not create a further decline in the attractiveness of investing in the City of Homes and harm the existing law abiding property owners by damaging the value of their property.

One Response to Springfield Landlords Ward Off Inspections?