Blog » Shoveling out the Past: A Note on Changes to the Snow Laws

Heavy snowfall across Massachusetts these past few months has kept property owners busy shoveling, plowing, and de-icing. Under the State Sanitary Code, owners are responsible for keeping all means of egress, exterior stairways, fire escapes, balconies, and bridges free of snow and ice. 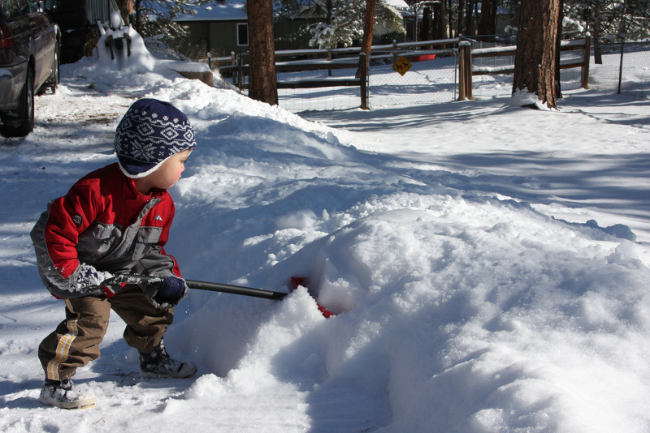 Those of us with very, very much experience should also remember that as of 1938, we may no longer use children as a source of inexpensive labor. Snow shoveling kid CC-BY-SA-2 by oddharmonic.

Landlords should be wary of taking comfort from the unusual (and appealable) recent Northeast Housing Court decision in the case of Goreham v. Martins, where a jury found the injured tenant 53% at fault for using the back stairway. The tenant knew the back stairway led to ice-covered ground that was less safe than the front exit. The judge ruled against the tenant on the warranty-of-habitability claim. The decision said the tenant misused the property by knowingly opting for the icy exit.

For a unit with its own exclusive egress, you can pass responsibility for clearing that particular egress on to the tenant via the lease. But for the common areas, the responsibility is the owner’s alone. How soon do you have to get out there? That depends on local ordinances and bylaws, which may also require you to clear snow from the abutting sidewalk and from around fire hydrants.

Whether you hire somebody or do it yourself, snow-and-ice removal costs time and money. And it seems that just when you’ve got the walkways and parking lots completely clear, along comes another blizzard.

Each new blizzard, you may think to yourself, Groundhog Day or, in the words of Yogi Berra, déjà vu all over again. But you set to work anyway, because you know that you have a legal duty to keep your premises reasonably safe.

Then a little voice inside your head whispers, “Safer to leave it alone.”

You pause. A bell rings faintly in the back of your mind; something about a quirky Massachusetts law that actually punishes property owners for trying to remove snow.

“Really?” you ask. “Safer to not remove the snow?”

“That doesn’t sound good,” you think.

“Not good at all,” says the little voice. “You shovel the snow into a pile. Some of it melts. Then it freezes. Now you got yourself a lumpy pile of snow and a bunch of ice. Somebody slips on it.  Personal injury. Deductibles. Lawyers. Damages. Bankruptcy.”

If you hear this little voice, do not listen to it! Its information is out of date! Massachusetts law has changed. It changed when the Supreme Judicial Court decided the case of Papadopoulos v. Target Corp., 357 Mass. 368 (2010).

Before the Papadopoulos decision, if somebody slipped and fell on snow or ice, a key question for property owners, lawyers, insurers, judges, and juries was this: Was the accumulation natural or unnatural?

In a lawsuit, liability could turn on whether the snow and ice that caused the plaintiff to fall was untouched by human hand or had been interfered with in some way, e.g. by the well-intentioned efforts of the property owner.

If the plaintiff had fallen on a patch of rutted ice left behind by owner’s diligent (but imperfect) snow-shoveling efforts, the owner would be liable. So, as counter-intuitive as this sounds, evidence that the owner had tried to make the premises safe actually made matters worse.

The law sent a message similar to the Miranda warning: “Anything you do can and will be used against you in a court of law.” In a classic perverse incentive, it was better to not try at all, rather than to try and – despite good faith efforts – fall short of perfection.

In the Papadopoulos case the Supreme Judicial Court did away with the unnatural-accumulation rule thereby removing that perverse incentive.

When Papadopoulos was decided, where did that leave the law regarding premises liability? The court said that property owners must use reasonable care to keep their premises reasonably safe for lawful visitors “in view of all the circumstances.” And what does that mean? It depends.

According to the court, what is reasonable in view of all the circumstances depends on the amount of foot traffic at the place in question, the seriousness of the likely injury to visitors, and the cost of snow-and-ice removal. Even with those factors in mind, it can be difficult to determine in advance what a judge or jury would deem reasonable. As answers to legal questions go, “it depends” must be one of the most annoying.

So as a practical matter, here is a question to ask yourself when deciding how much time, money, and other resources to expend on the task: What would you do if you were expecting a visit from somebody you really wanted to impress?

Despite the jury in Goreham v. Martins finding the tenant 3% more negligent than the landlord, the decision affirmed this interpretation in that the judge found that the warranty of habitability extended to the parking area adjacent to the leased premises.

To summarize, landlords have a duty to keep their premises free of snow and ice. The unnatural-accumulation rule is a thing of the past and no longer good law. Remove that snow like you were preparing for a celebrity visit, and like you wanted your property to be the first to arrive at spring.

6 Responses to Shoveling out the Past: A Note on Changes to the Snow Laws