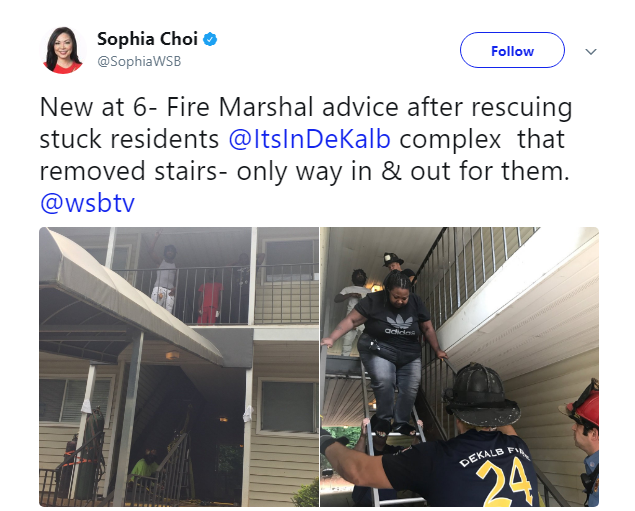 “Landlord” in newspaper headlines is usually a dirty word. Subscriptions to the print edition of our newsletter support even-handed housing journalism.

One landlord in Georgia recently made international headlines when the fire department evacuated tenants from their second-floor apartments. If the reporter had done their job, the story might have gone much differently.

The story implies that the landlord taped notice to each door about removing the stairs, and then while he still had the scotch tape in his hands, swung a sledge to take down the stairs.

Buried in the article is a fact that, if investigated, likely would have unraveled the entire story: residents did receive a letter the week prior about the staircase needing emergency repairs. The owner had offered to pay for hotel rooms. It would seem that some tenants didn’t check their mail.

There were two ways this story could go. One way we would have a news story about a brutal landlord and his innocent tenants being trapped upstairs. Another way we would have a non-story about incompetent tenants and an owner quickly satisfying an order from the code department. Which story would get more views and more ad money? Hint: Are there more tenants or landlords in the world?

Another landlord in New York is now facing jail time for creating bad conditions in a rent-stabilized complex. As above, we cannot tell from the reports what really happened. Real Estate Weekly says in their headline that he bulldozed his tenants out of their home. But read the article, and lower down it says, “virtually bulldozed.” This makes their headline clickbait at best, libel at worst.

The NY Daily News lists other infractions of this owner, including destroying interior spaces and purposefully deactivating the heat in the winter. Because the reporting is biased, it might be that the landlord merely started a long interior renovation project and shut off the heat to put in a new furnace.

Given the level of city involvement in this case, it seems likely that the landlord was fighting rent control by making renovations deliberately unpleasant. If the tenants moved out, rent control for those units would end. This is called vacancy de-control.

Public officials asked about the story correctly conclude that the New York rent control laws need to be changed. But they said that the vacancy decontrol loophole needs to be closed. That is the wrong conclusion. If the rent control law is so bad that an owner would rather risk jail than operate his building under rent control, then the rent control law must be completely overhauled. The law shouldn’t create situations where one person is an economic slave to another, where incarceration would be a relative freedom.

Remember that as landlords, we have targets on our backs. It is important that we go above and beyond to be civil, respectful, and businesslike. When we mess up, there will be no recognition of how the laws or regulations may have led us to our plight. If the laws lead us to commit inhuman acts, we are no better than the tenant advocates make us out to be. The value of a trade association like MassLandlords is in having a place to turn for support, help, and eventually, better laws, before we end up in the paper.

Subscriptions to the print edition of our newsletter support even-handed housing journalism.