As my tenant and I sat in the waiting area at RCAP Solutions, she confided in me.

"I went to the ER," she said. "This whole situation, I was so stressed. I had chest pain."

Surprised, but then, not really surprised, I said, "I'm so sorry. I've found this stressful, too."

This was my first time renting to anyone with a Section 8 voucher. As we sat I noted the waiting area. It was very modern and well-appointed. The walls were freshly painted royal purple. We were seated in chairs along one wall. To my right was the reception desk, looking somewhat oversized for the one person working there. Beyond that was the entrance, beside which there was a rack of glossy brochures. A digital screen opposite me displayed today's date. The American flag stood proudly beneath it. Ahead and to my left were three meeting rooms with slate doors and hand drawn chalk signs, identifying each room by number.  Directly left was a glass window into someone's tidy office. The lights were on but no one was apparently there. It was all glossy and new, reminiscent of a funky startup space in Cambridge. It looked as if someone had expended a great deal of time and money to create this space.

It was ten past eleven in the morning, and we had been waiting already 40 minutes for our 10:30 appointment. Our case worker had not yet graced us with his presence.

The trouble actually began six weeks earlier. On April 17, I notified my new tenant that her application was likely to pass. My new tenant -- let's call her Grace -- provided the rest of her documentation on April 27. Her limited income was augmented by her voucher, such that her income to rent ratio was actually very good. The best part of her application was her tenancy history, which was long and glowing. It wasn't just the current landlord, whose truthfulness is always somewhat under suspicion. (The current landlord might lie to get a bad tenant out.) But she also had good references from the previous landlord, and from the landlord before that. Grace got her passing score that day and on May 2, beating another non-section 8 applicant, presented me with a complete payment for her security deposit. I took the apartment off of the market.  We planned for a June 1 start.

With Section 8, the administrator requires certain paperwork to be filled out. We did this and both signed it, except for the part where the landlord may choose to designate an agent. I operate as myself without any agent, so we left it blank. My tenant hand delivered the paperwork along with all supporting materials required (for instance, proof that I was really the landlord). Disappointingly, our paperwork was rejected by the caseworker. Let's call him Steve. Apparently Steve wanted me to write something in the "agent" section. The following day Grace delivered the application back to me. I wrote "n/a" in the agent section, and Grace picked it up the next day for a second delivery to Steve. This was May 5.

Grace was told the inspection of my apartment would be scheduled within three days. Grace was eager that this should happen, since she wanted to get in to clean. I was eager, too, since I had been researching online and learned that I might easily fail my inspection. I would need time to make repairs.

Two weeks went by and there was still no word about any inspection. On May 19th I texted Grace to enlist her help. I had tried calling Steve for interim updates, but he did not pick up either of my two calls. And this is what his voicemail said: he would be on vacation until April 21. Apparently, Steve's voicemail message is updated more or less monthly. Also, his voicemail was full and not accepting new messages. So Steve was telephonically MIA.

Grace was distressed. Her attempts to contact Steve over the phone had been similarly unsuccessful. The only way she could get an answer was by going to the office, which is difficult to do during the work day. So she asked me to ratchet up the pressure on them. There were only six business days left in the month and we seemed likely to miss our June 1 lease-up date.

If that happened, Grace would be a tenant-at-sufferance in her current apartment, an unlawful hanger-on. She would be blocking new tenants from moving into that apartment. She would be served an eviction notice. She would have no recourse to RCAP Solutions, and could, if the case went to court, end up with a permanent eviction record and potentially lifelong impairment in the housing market.

In a phone conversation, Grace told me that this would be the third time RCAP Solutions had missed her lease-up date, leaving her faced with eviction.

Both of the previous cases were settled out of court, which is why I had not seen anything negative during my background check.

Panic over the Inspection

The idea of missing our June 1st start date absolutely panicked me. Would Grace bail and find a different emergency apartment? Where would that leave me? I had already accepted a months' longer vacancy than I had wanted. If we couldn't start June 1, the apartment would be vacant for three months, an absolutely worst case record, potentially with no applicant able to fill it. Grace and I would, to varying degrees, each be seriously set back.

So just after 9am on May 21st, I started calling RCAP Solutions' main office. I was transferred to no fewer than five different people and voicemails. Here is what I had learned:

We conferred, checked our records, and followed up with an emphatic "May 5th!" for the date we submitted.

Just after 4 o'clock on the 21st, Steve called me. (Had he just arrived at work?) I missed the call, but he said in a voicemail that he had located our abandoned application and had forwarded it to inspections and "put a rush on it." I didn't know what that meant, and his voicemail didn't sound particularly rushed, so I called back.

He said RCAP Solutions was routinely last minute with inspections.

He agreed to help me out by coming over first thing tomorrow morning, Friday May 22. I was relieved.

The inspection went fine. I received a "pass/repair," which allowed us to lease up.

Where are the rental forms?

I called Steve in an attempt to get the required paperwork that would become our lease package. HUD has an addendum and RCAP Solutions has an addendum that must be signed along with my lease forms. Steve said he would email it that day, Friday.

He didn't email them Monday.

He didn't email them or return calls on Tuesday or Wednesday.

There were only two business days before June 1.  Grace and I still had no rental agreement.

On Thursday, May 28, Grace and I managed to corner Steve on the phone and get an appointment for Friday morning. Normally RCAP's office is not open to the public on Friday's, but with an appointment we were going to be allowed in.

So Friday morning, as the minutes counted down the last day of May, we sat in the waiting room at RCAP Solutions, wondering if Steve would appear with the forms, or if our six week attempt to be landlord and tenant was about to crash and burn.

In the end we got leased up. But let's summarize:

A Warning to Landlords

This whole experience was completely unexpected. I never imagined that the worst part of renting to a Section 8 tenant would be her caseworker. I spoke to some other landlords, and here's what I learned:

For RCAP Solutions, this is normal.

Some caseworkers at RCAP Solutions have a good reputation. They do their job, and in comparison to their peers, are superlative in every way. But no one I spoke with was surprised to hear that I had found one of the duds.

It sheds light on an absolutely decadent aspect of public subsidy. Here on the one hand you have a glitzy office and no doubt well-heeled executives, who display the flag and fresh paint and schmooze all the funding their way. But have they spent their funding on the best caseworkers money can buy? No. Far from it. Their operations were absolutely slipshod in this one example, and their reputation is denigrated by many.

The same cannot be said of other administrators.

Worcester Housing Authority, by comparison, has a more or less sterling reputation. Take this one example. A landlord was upset at waiting in line to pick up her rental forms. So WHA created an expedited way for her to get them. They changed their processes in response to one call within one week of the call.

As landlords, when we have a Section 8 tenant apply, we really need to pay attention to who their administrator is, and then to who their caseworker is. For although it's illegal to discriminate on the basis of someone's receiving public assistance...

There is no law about refusing to work with incompetent administrators.

So if your tenant is from RCAP Solutions, tell them you love Section 8, but that you need to interview their case worker first. See what they do. If you can get through to the caseworker, maybe you got a good one. If not, it's a warning sign, and you should think twice about starting down that road. You and the tenant both might just end up at the ER. 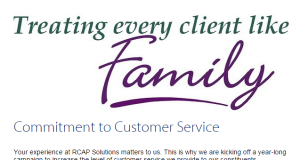 This undated post from the RCAP website shows an intent to treat every client like family, at least for the duration of their one-year campaign. Perhaps the campaign was over when we started, or perhaps RCAP administrators dislike their family.