There are at two recent elections in Massachusetts that highlight the importance of ranked choice voting.

If you are unfamiliar with ranked choice voting, per ballotpedia, it is “an electoral system in which voters rank candidates by preference on their ballots.  Preferences are considered and reconsidered according to a fixed formula until hopeless candidates are eliminated and a clear winner obtains a majority.” 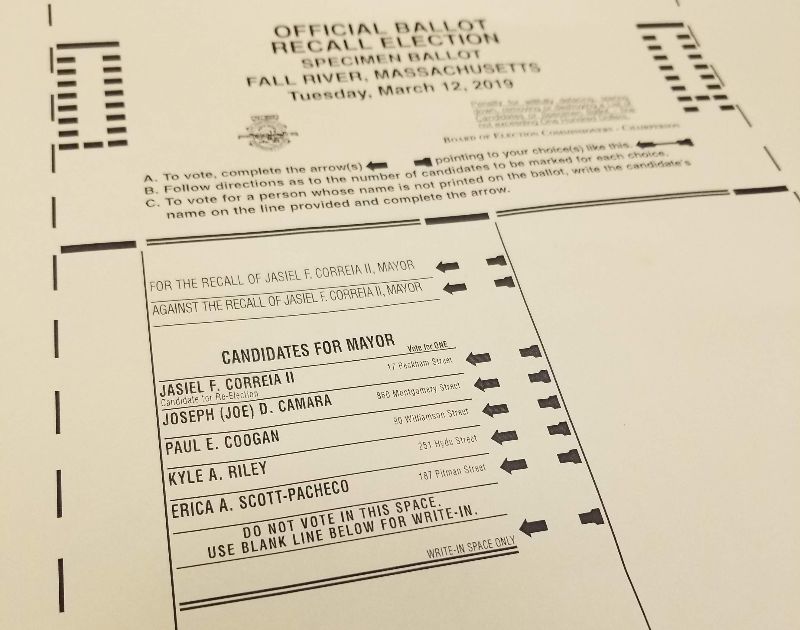 Ranked choice voting in Massachusetts could have made all the difference in this bizarre election where the mayor of Fall River was recalled and re-elected on the same ballot.
(Photo Credit: Herald News)

Maine approved ranked choice voting in the 2016 November election. Now it appears as a ballot question for Massachusetts voters this year, and recent examples show the Commonwealth would be wise to follow in Maine’s footsteps.

A mayor recalled, and re-elected

In 2019, a local election in Fall River made national news when its mayor, Jasiel Correia, was voted out of office in a special election, and, on the same ballot, voted back in again. Correia had been federally indicted on 13 counts of wire fraud and filing false tax returns, allegations Correia denied. He refused to resign at the city council’s behest, and Fall River held a special election in March of that year that asked constituents two questions: “Should Correia be recalled?”, and “Who of the five mayoral candidates should be elected to the position?”

By a large margin, the residents of Fall River voted to recall Correia. But Correia’s name also appeared among the five mayoral candidates on the ballot, and approximately 35 percent of the voters selected it. The other 65 percent of the votes were divided among the other four candidates, none of them achieving majority. School committee member Paul Coogan lost by fewer than 300 votes.

This is a situation where ranked choice voting almost certainly would have avoided the absurdity of electing someone that most of the city wanted recalled. In November 2019, voters in the regularly scheduled election chose Coogan by a wide margin (more than 8,000 votes vs. Correia’s 2,777). Correia finished his term and left office in January 2020. Correia’s criminal trial was scheduled to begin in early 2020, but was rescheduled due to the pandemic, likely until 2021.

A winner with less than a quarter of the votes

In September of this year, Massachusetts again made national news. Its fourth congressional district had an abundance of democratic representative candidates on its primary ballot. Rep. Joseph Kennedy III had opted not to run for re-election, and no less than nine democrats came forward to vie for his seat (for comparison, only two republican candidates appeared on the ballot).

The result was a primary where republican candidate Julie Hall took 63.1% of her party’s votes, and democratic candidate Jake Auchincloss won with a mere 22.4% of the vote. The runner up, Jesse Mermell, had 21.1% of all votes (losing by less than 2,000 votes). And third place went to Becky Grossman, who still garnered a close 18.1% of voter support.

In other words, almost 78 percent of fourth congressional district voting democrats would have preferred someone else as their first choice of representative. Had ranked choice voting been in effect, it’s possible that the voters who chose the candidates coming in last would have selected Auchincloss after their choices had been eliminated. It’s also plausible one of the higher-ranking candidates would have turned out to appeal to a greater percentage of the voting (democrat) population.

In one of these examples, it’s clear that most of the voters would have preferred not to have someone facing criminal charges as the mayor of their city. In the second example, we have no way of knowing what the true will of the people was. The votes are too close to tell. Perhaps Auchincloss still would have won, once those who chose an eliminated candidate were asked to choose again. Perhaps not. Regardless, ranked choice voting would have prevented both situations as they played out.

Situations like these are important to remember when you got to vote in November. The MassLandlords Board of Directors encourages you to support a voting system that allows the most voices to be heard. Vote yes on Question 2 for ranked choice voting.