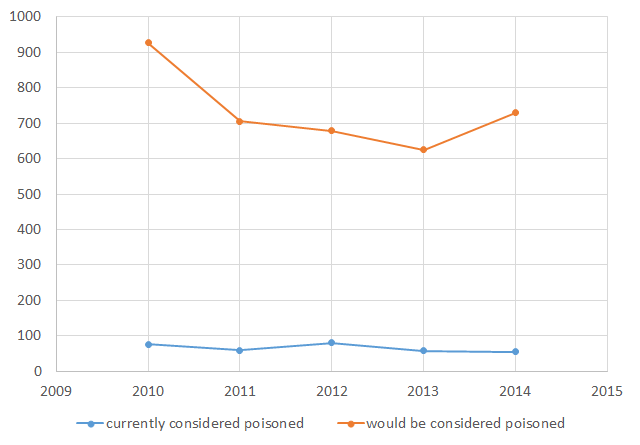 CDC data show that approximately ten times as many Massachusetts children will now be considered poisoned. Search MassLandlords.net for "Proposed Lead Paint Regulations are Flaky" for the full article September 2016.

Update: The changes described in this article did take place on Dec 1 as expected.

Massachusetts lead paint regulations are to undergo a major change December 1, 2017. See what it means for owners and managers.

It was expected at time of writing that by time of publication, the MA Department of Public Health (DPH) will have filed changes to 105 CMR 460, the lead paint regulations, effective December 1, 2017. As reported previously, there are seven significant changes for owners.

First, fewer surfaces are now to be considered “accessible/mouthable.” This may reduce average deleading costs by one-third to 40%.

Second, blood lead levels that constitute poisoning are now 10 µg/dL. As there is no legislative funding for the increased healthcare costs, this may increase lawsuits.

Fourth, renovating vacant or owner-occupied single or multifamily units still requires notice to appropriate regulatory bodies, but the wait time after serving notice has been eliminated.

Fifth, any contractor seeking to use chemical strippers will need an inspection at bare wood and a second inspection repainted.

Sixth, a new class of “friction surfaces” have been defined that include previously accessible mouthable surfaces. These are doors, door jambs, and treads. Encapsulation will not be allowed on friction surfaces.

Seventh, the lead level allowed in paint has been reduced to 90 ppm. Conceivably many more surfaces will now be considered hazardous.

For more detail, see our previous article. Owners are advised to make a plan to get their lead certificates.