MassLandlords plans to file a bill with the 193rd state legislature that would appoint a working group to study the increasingly urgent issue of high flood risk in the capital and how a plausible flood event could negatively impact state governance – not to mention destroy acres of high-priced real estate. 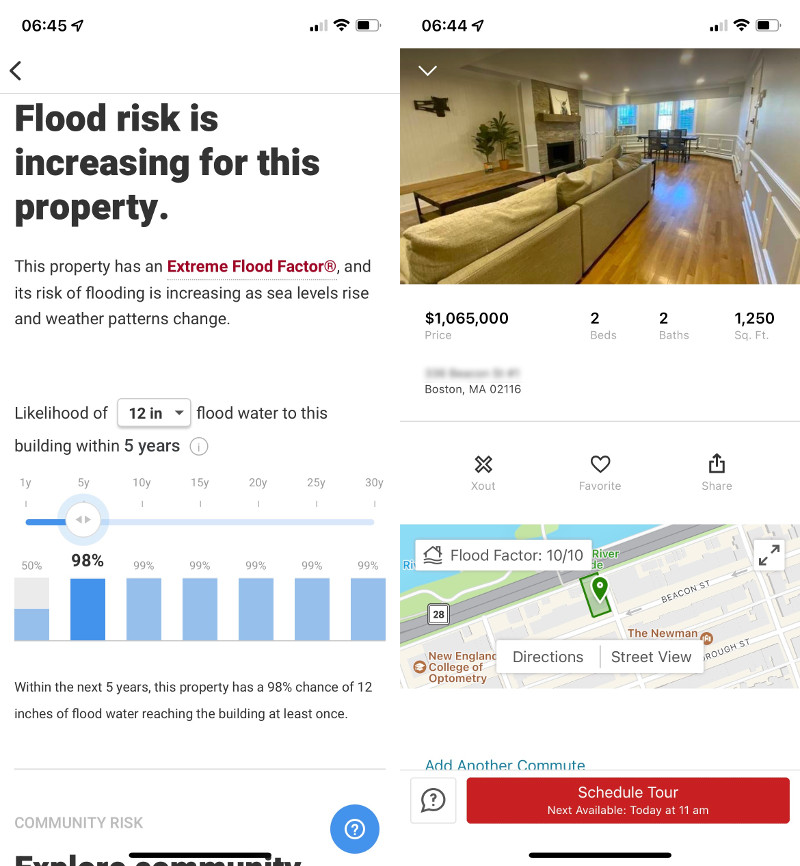 This April 2022 condo listing for Back Bay, Boston shows a 98% risk of 12 inches of water in the next five years. Editorial use of RedFin and First Street Foundation FloodFactor.

The proposed legislation is titled an Act Establishing the Climate Resilient Capital Task Force. It calls for the establishment of a high-profile team to determine workable plans for ensuring the continuance of civil government in the event of a catastrophic weather event in downtown Boston, the location of the state capital.

The task force would be charged with developing plans for either bolstering defense of state capital buildings from extreme flooding or relocating state government buildings and facilities to an area or areas less vulnerable to flooding and disruption from extreme weather.

Owners of property in the downtown region would benefit enormously from information and data compiled by the task force. For one thing, an in-depth report on future flooding would provide insight that would inform real estate investment and assist in buying and selling decisions and market parameters.

For owners of coastal property along the north and south shore, the work may also eventually lead to “managed retreat” in Massachusetts. Managed retreat is a new policy framework in which at-risk owners would sell their buildings to the state or its agencies. These public buyers would then decommission and remove the materials to rebuild elsewhere above the flood zone.

Flooding of Massachusetts state government buildings, along with proximate homes and businesses, becomes more plausible ­– even likely – with each passing year. The capitol building, the Supreme Judicial Court and many buildings that house governmental offices and agencies sit in the downtown Boston region. This area is a peninsula sandwiched between the Atlantic Ocean waterfront and the Charles River.

There are two components to coastal flooding: catastrophic storm surge and gradual sea level rise. The two effects will add up and worsen over time.

As global temperatures rise, catastrophic flooding in downtown Boston has gained high probability. Flood Factor, an online flood assessment tool, predicts a 95% probability of at least one foot of water in Back Bay basement condos within the next five years. The risk declines only slowly as you climb uphill.

According to the most recent report from the Intergovernmental Panel on Climate Change (IPCC), it is very likely that sea levels will continue to rise globally over the remainder of the 21st century. Due to such sea level rise, extreme events that used to occur once a century, such as catastrophic flooding, will occur annually for many locations near oceans.

That includes downtown Boston, a low-lying and vulnerable area that could spend much of the year under water in the near future.

The National Oceanic and Atmospheric Administration (NOAA) predicted Boston would have up to 18 days of high-tide flooding (HTF) between May 2022 and April 2023, in which tides rise between 1.75 and two feet above the daily averageThe same report predicts 45-90 days of flooding in Boston by 2050. 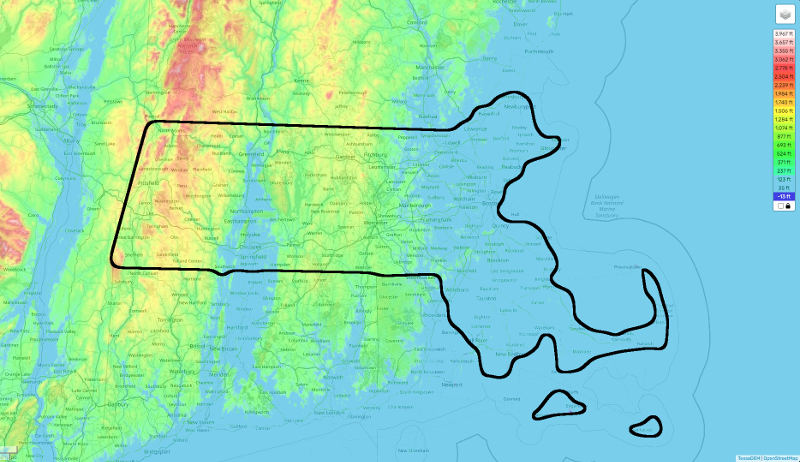 Although perhaps unthinkable to many, if all the ice melts, the world will be very different. It's not too late to stop some of this. But a large amount of sea level rise is already “committed” in the sense that it is irreversible. How much of Massachusetts real estate gets lost during storm surge depends very much on the actions we take this next legislative session. Licensed TessaDEM and OpenStreetMap under ODbL.

The Protection of Government Infrastructure

Mayor Wu’s Resilient Boston Harbor plan puts in place measures to create open spaces, waterfront parks and other protective buffers to absorb the impact of flooding from sea level rise and shield buildings and residents from flood damage and harm.

But importantly, neither of those plans specifically addresses the continuance of civil governance in the event that our state’s government facilities become unusable or severely damaged due to flooding.

The Commonwealth of Massachusetts Comprehensive Emergency Management Plan (CEMP) does address the continuance of government, but only to direct that government functions and personnel, both state and local, are informed of and trained in emergency response procedures. Again, no mention is made of contingencies in case of the destruction of facilities and offices that house government functions.

The official National Oceanic and Atmospheric Administration "Sea Level Rise Viewer" falls four feet short of actual storm surge from Hurricane Sandy, which was 14 feet when it hit New York in 2012. Even at ten feet of storm surge, Boston's infrastructure and access to the capital are swamped. Public Domain https://coast.noaa.gov/slr/#/layer/slr/10/-7910282.712677894/5215253.588984675/15/satellite/none/0.8/2050/interHigh/midAccretion

Relocation or Protection of State Government?

Among other directives, the bill would charge the task force with considering the relocation of state government facilities as one way to avoid governance interruption in case Boston is hit with a catastrophic weather event. Relocated facilities would include the executive branch offices, the offices of the agencies, the halls, chambers and offices of the General Court, and the Supreme Judicial Court.

Relocation would either consist of constructing a new capital “near the geographic center of the Commonwealth,” or distributing government offices throughout the state in specially declared “capital districts.”

Potential locations would include areas above the inundation elevation “assuming all ice melts across the globe.” According to the U.S. Geological Survey, if all glaciers and ice caps on earth were to melt, global sea level would rise approximately 70 meters, or 230 feet. Every coastal city on the planet would be flooded in such a scenario. Several inland locations across the state are also below that flood level, including parts of the Pioneer Valley. Imagine downtown Springfield wholly submersed under what may someday be called the Bay of Hartford or the Connecticut River Delta.

If the task force determined that protection of existing offices were the more prudent action, it would detail infrastructure requirements to meet such protection, including road, rail, airport, seaport and communications. Protective measures would likely include water levees, seawalls or other defenses against potential seawater rise.

Of course, government offices aren’t the only buildings that will be impacted as sea levels rise and water flows inland. Thousands of commercial and residential buildings – rentals, condos and homes – would be rendered uninhabitable or severely damaged with only a single large flood, let alone the predicted succession.

It’s difficult to imagine the chaos that would ensue if one mega-storm caused a large surge of the Atlantic off the Boston coast, swamping the entire peninsula, wantonly wiping out properties and instantly creating a swath of homelessness.

New York has already experienced this in 2012 with Hurricane Sandy, where storm surge peaked at 14 feet.

Devising a plan now to either protect or relocate government infrastructure in Boston could also potentially avoid such residential displacement, as other buildings would be included in flood mitigation systems.

Or, if relocation to “capital districts” is determined to be the solution, these new centers could be areas of opportunity for industry, real estate investment and employment. Housing, schools and businesses could comprise smaller cities complete with government operation – minus the constant threat of catastrophic flooding – in place of the overcrowded, over-leveraged, governmental hub that is now downtown Boston.

Without the choking limit on land that now defines Boston, such smaller governmental zones could attract new populations on the lookout for more affordable houses and lives.

The MassLandlords proposed legislation underscores the importance of establishing a team “for the purpose of identifying, considering, and recommending options for the uninterrupted continuity of Commonwealth civil government under worst-case climate scenarios either by the defense of the existing state capital or the relocation and distribution of state offices to more naturally advantageous sites.”

The proposal calls for task force members to be appointed by Aug. 15, 2023, and to begin convening no later than Sept. 15, 2023. The team would consist of at least a dozen members, to be appointed by various individuals in state government and industry, including one by the governor and one by the lieutenant governor.

The appointed team would estimate the economic impacts of proposed relocations. Expenses incurred by the task force would be funded by the Massachusetts Office of Emergency Management, which would also provide administrative support as requested.

The Need for a Plan

Boston, downtown Boston and the state’s government facilities are increasingly vulnerable to destruction from flooding. While conceptual plans exist for continuing civil governance, and while appointed individuals are trained in contingent government operations in case of disaster, no plan exists to protect the physical structures and offices that accommodate such continued operations. And no current plan will protect access points including Storrow Drive, I-90, I-93 and South Station.

The Climate Resilient Capital Task Force would create a plan that would provide stability and assurance of the continuation of governance in the case of high-impact weather scenarios. It would also provide valuable information to owners of property in the downtown Boston region.

The task force could help prepare for the inevitable rise in sea levels that may soon submerge Boston and other Massachusetts towns and cities. Without such a plan, the potential for disruption of government leadership, and residential displacement, could exacerbate the already disastrous effects of coastal flooding.

We have an opportunity now to form a viable plan in advance of a disastrous event that would negatively impact government operation and the lives of thousands of landlords and renters. Alternatively, we could do nothing and react haphazardly to events as they happen, at a much higher cost in both lives and dollars. 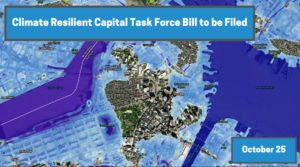 "We're already committed to about 10 meters of sea level rise... Collapse of the AMOC could cause... significant sea level rise along the northern seaboard of the US."