In late 2021, the Massachusetts appeals court heard Sanchez v. Collins, a case that sought to determine whether a landlord had the right to bring nonpaying tenants to court for breach of contract under the eviction moratorium. MassLandlords filed an amicus brief in September 2021 in response, arguing that the legislation imparting the moratorium specifically stated landlords could still attempt to recover rent. 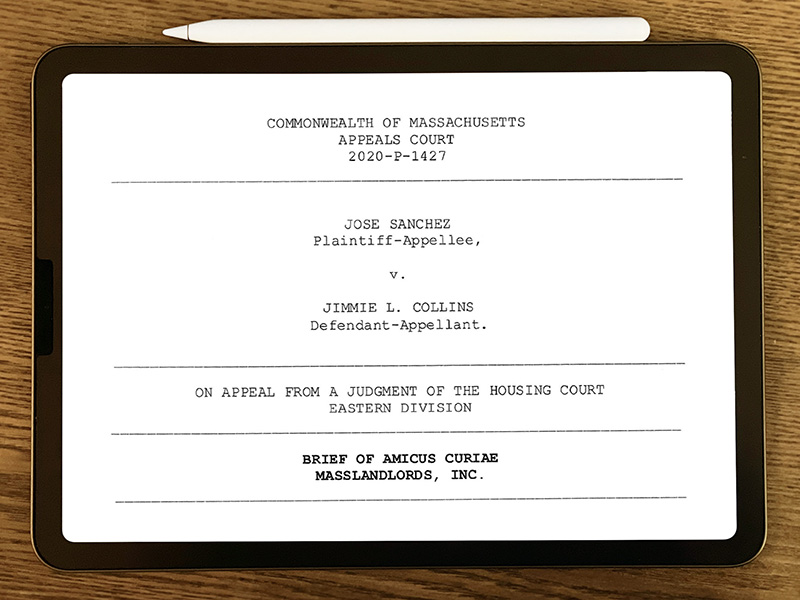 The amicus brief filed by MassLandlords encouraged the court to allow landlords to attempt to recoup lost rent from the pandemic.

Chapter 65 of the Acts of 2020 officially established a moratorium on evictions in Massachusetts. However, Section 3(f) of Chapter 65 stated that “nothing in this section shall relieve a tenant from the obligation to pay rent or restrict a landlord’s ability to recover rent.” In the brief, attorney Peter Vickery argued on behalf of MassLandlords that this verbiage specifically allows a landlord to take action to recover owed rent, even if the tenant could not be evicted.

Vickery went on to remind the court that the inclusion of the word “ability” should not be interpreted to mean anything other than its standard definition; in other words, while a landlord could not evict a nonpaying tenant, they should be able to take them to court for breach of contract and attempt to recover lost funds.

“If a court were to dismiss a landlord's separate action or consolidate it with a summary process case (suspended pursuant to Chapter 65), it would thereby restrict the landlord's ability to recover rent,” Vickery continued. “To be clear, it would not restrict the right, but it would very much restrict the ability. Restricting the ability in this way would be contrary to the clear intent of the Legislature.”

“When the Legislature intended to postpone obligations...it did so expressly,” Vickery wrote, referencing a subsection that deferred toll deadlines. If a tenant’s obligation to pay rent is ongoing, he argued, then so is the landlord’s ability to attempt to recover rent.

Vickery further noted in the brief that former landlords would not be able to use summary process action to get owed rent awarded to them. If a tenant moved out during the moratorium, the landlord could not make use of a summary process. This leaves landlords without a way to get an award for lost rent, unless they can sue for breach of contract.

“[Former landlords] will be without remedy, which is an outcome the Legislature did not intend,” the brief concluded.

Court records show the last action on the case was taken in December 2021, when the court was waiting on a response from the plaintiff.