On March 15, MassLandlords released Part I of its study on evictions. The study showed that cases sent to Massachusetts Housing Court were three times as likely as cases in District Court to exceed 90 days duration. This is the first report calling into question the proposed 2017 Housing Court expansion. 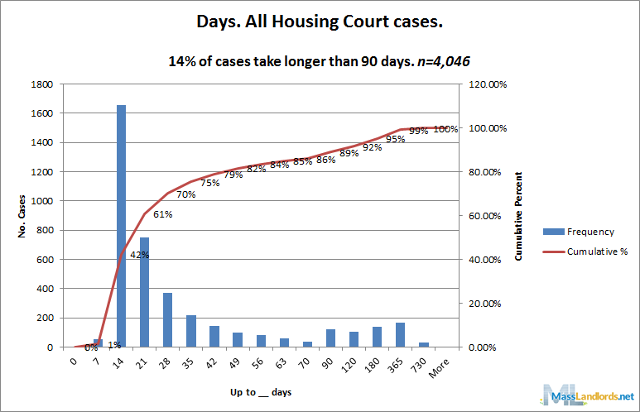 The reason for the discrepancy between Housing Court and District Court was not determined by the study.

The longest case in the study period lasted 1 year, 3 months, 2 weeks, and two days. The landlord prevailed. In a different case, the largest judgment was found to be $32,776.90 owed to the landlord.

In cases where a judgment was decided, 99.8% of cases were found in favor of the landlord.

Feedback over email has been mixed.

One irate landlord and member wrote, “I have no faith in some of this information as it relates to amount of time it takes a landlord to evict a tenant. The report states that it took an average of 55 days which is far from true, as it took me 10 MONTHS to get one of mine out. Just where did they get this information from ???”

One attorney and member wrote, “This is really good work. It's not anecdotal. It's based in fact. In my world, this is what sways people and legislators. I only wish we had more resources so we could turn out more work like this.”

Another referenced the infamous “Cat Lady,” whose Housing Court eviction was delayed until a police officer entered the apartment and found dead cats in a freezer, among other unsanitary conditions.

A third party contractor pulled publicly available data for over 8,000 evictions from MassCourts.org. All evictions from January 2, 2014 to October 31, 2014 were included.

A reporter from Massachusetts Laywers Weekly asked what MassLandlords members wanted in exchange for expansion of Housing Court.

A MassLandlords follow-up survey showed that landlords would be willing to support an expansion of the Housing Court if rent escrow were made mandatory during habitabilty disputes.

Part II of the study will examine the statistics of judgment collection.